Despite temperatures reaching highs of 28C on Friday, the country will cool over the next couple of days. A band of rain will also wash over the most of England and Wales on Saturday. Aidan McGivern, a meteorologist at the Met Office said: “The weather in the UK can be unfair at times and in northern Britain it is shrouded in areas of cloud.

“Southern parts of the UK, much sunnier skies and it stays that way through Friday.

“This evening it’s not going to feel particularly pleasant with a strong wind for the far north of Scotland and rain moving through the northern isles and continuing to feel damp across the rest of Scotland, a few drabs of rain pushing into the central belt.

“And then that rain will fringe across northern Ireland.

“Cloudy skies for northern England and increasingly for north and west wales – quite gloomy there through the night. But clear skies will remain for central and southern Britain.” 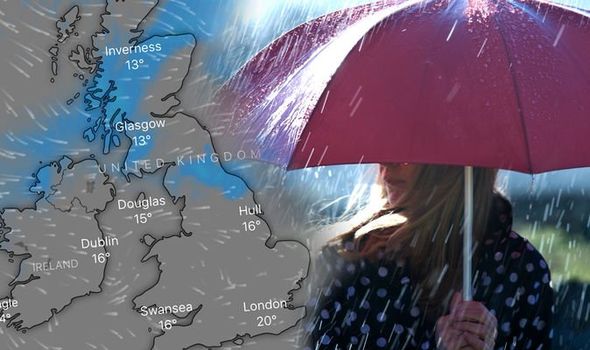 Mr McGivern added temperatures will still remain warm despite the cloud and rain.

He said: “Temperatures in the south will remain mainly warm in the night. For further north for parts of Scotland, falling into the single figures because we’ve got cooler air moving south across this cold front.

“The cooler air will push into Scotland, but having said that, the cooler air arrives with brighter conditions for Scotland.

“So a brighter day coming for most of the country compared to Friday.” 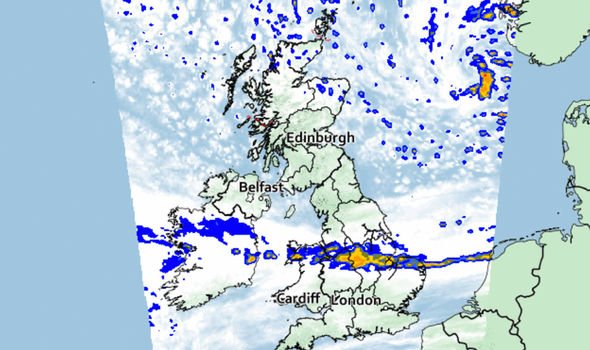 Northern areas will be mostly dry with a few sunny intervals on Saturday, according to Meteogoup.

There may be one or two showers in northern and eastern Scotland.

Saturday night will be cloudy with a few spots of light rain or drizzle across southern areas. 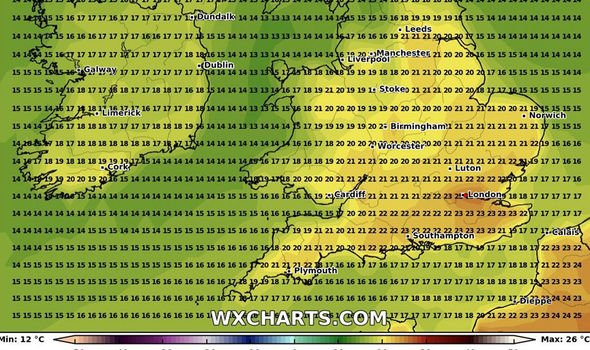 Central and northern areas will be mostly dry with sunny intervals and through the night, cloud and a few spots of rain will linger in the south and east.

Meanwhile on Sunday, it will be mostly dry with a few sunny intervals.

There will be patchy rain initially in the south.

Winds will be gentle from the north-west for most.