Britain basked during the hottest day of the year so far yesterday, but it’s not quite time to put away the waterproofs just yet, with cooler weather and showers on their way.

It beat the record for the year so far set at Heathrow Airport, west London, on Saturday, when temperatures reached 27.6C (81.7F).

The blazing sunshine does not appear to have lasted though, with clouds already closing in across the south east, rain on the way and highs of just 21C (70F) predicted for today.

Later this week there will be more blustery showers with windy and rainy periods persisting as the weekend approaches. 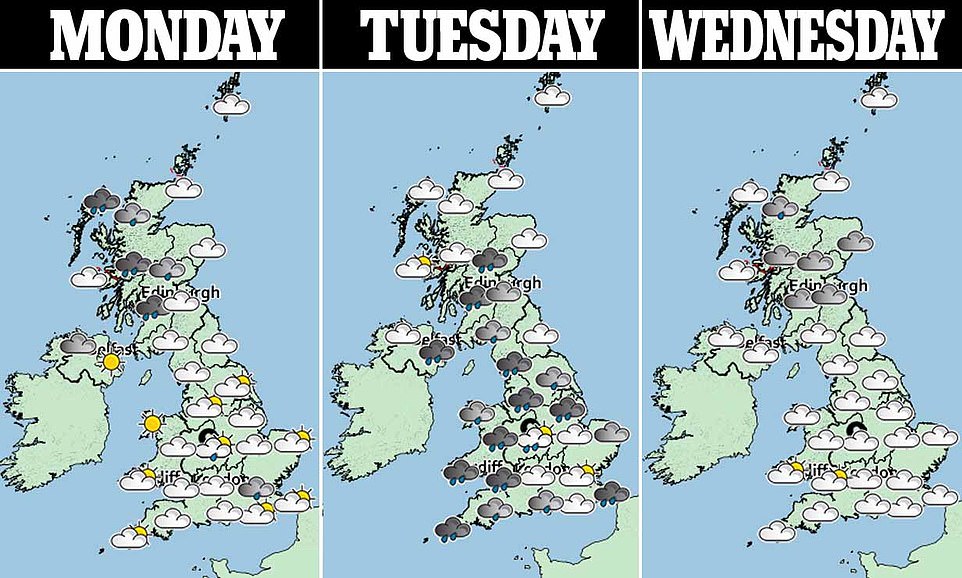 The blazing sunshine does not appear to have lasted though, with clouds already closing in across the south east, rain on the way and highs of just 21C (70F) predicted for today

Met Office meteorologist Marco Petagna said: ‘There are much fresher conditions moving in from the west now and things will be cooler for tomorrow.

‘We will see a mixture of sunshine and showers with most of the showers towards the north and west – it will be mostly dry throughout the south-east. The top temperatures tomorrow will be around 21C.’ 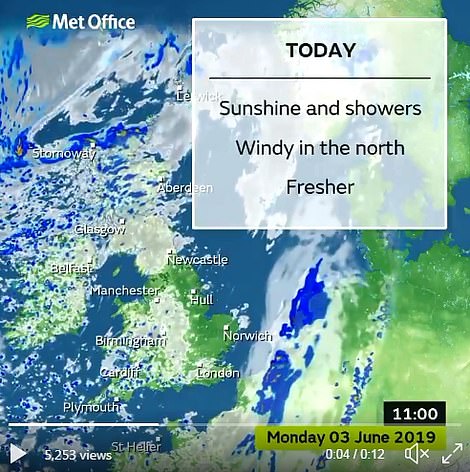 Met Office meteorologist Marco Petagna said: ‘There are much fresher conditions moving in from the west now and things will be cooler for tomorrow.’

Pollen levels are moderate to high across all of England and Wales, with warmer areas experiencing higher levels.

Forecaster for the Met Office Oli Claydon told MailOnline southern and eastern areas of England will stay relatively warm and dry, but there will be showers later in the week.

He said: ‘It’s going to be a good day for much of England today. It’s been a dry and bright start to the day for southern and eastern parts of the country and it looks like it will stay that way through the day.

‘It’s not a bad day at all, temperatures will be average for this time of year with highs of 71.6F (22C), a return to normal from the warmer than usual weekend.’

‘Tomorrow there will be rain for most parts of the UK, making it feel a bit cooler. There is also rain expected on the south and eastern coasts on Wednesday.’

He added that anyone already hoping for a repeat performance of last weekend will most likely be disappointed.

In Cornwall daredevil teenagers were spotted playing chicken with gigantic waves crashing down on the sea wall in Portreath. 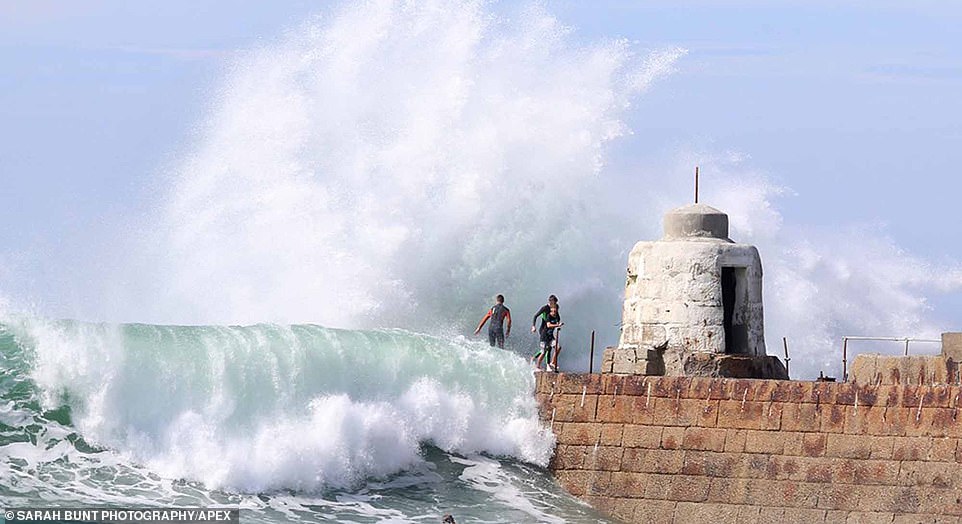 Reckless teenagers have been pictured taking their life in their hands dodging enormous breakers crashing against the end of a harbour wall in Portreath, Cornwall 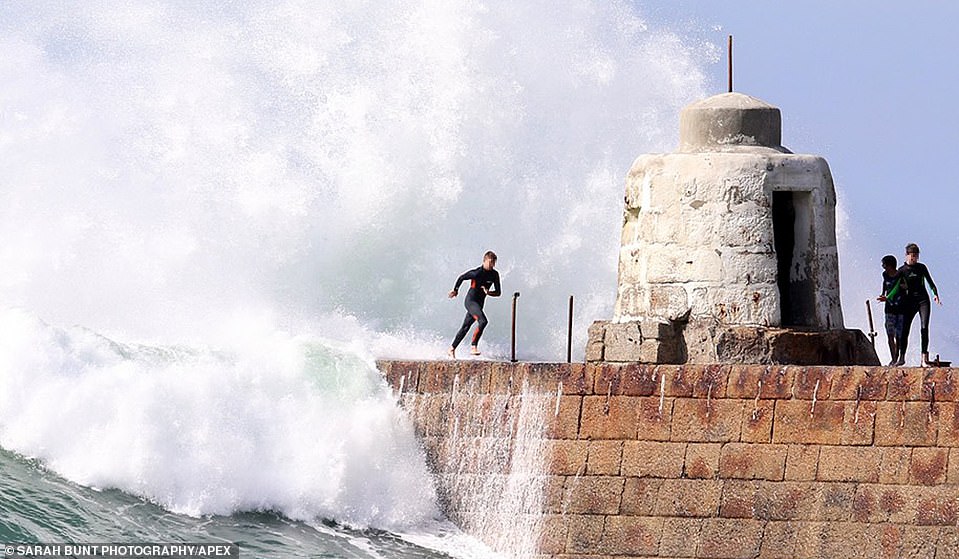 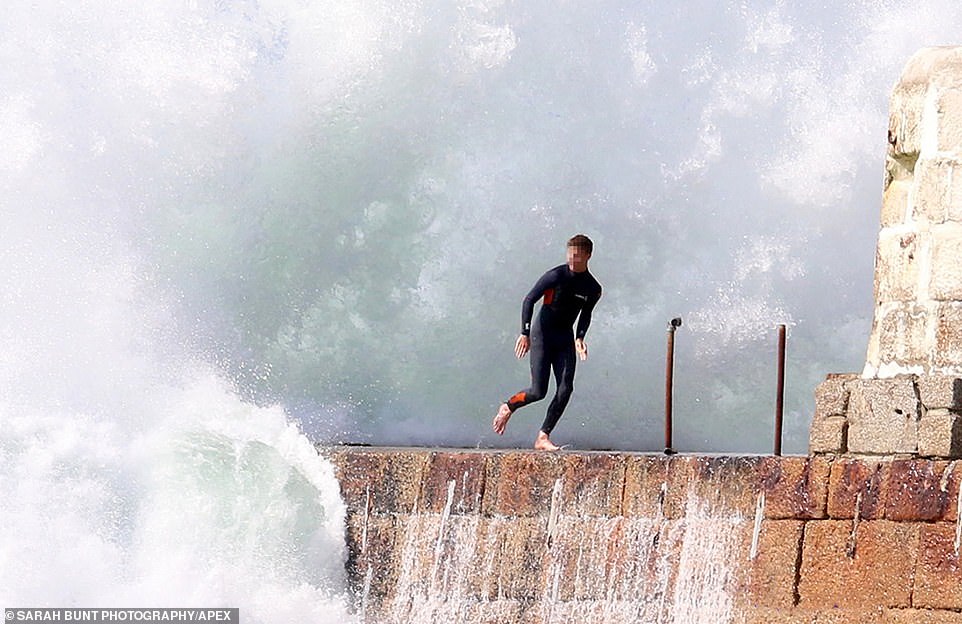 The boys (one pictured), who appear to be around 16 to 17 were warned by coast guards to get off the harbour wall

Sarah Bunt was stunned when she saw a group of boys in wet suits perilously close to the huge waves as they broke against the harbour wall.

She said the boys had been warned by lifeguards at the beach not to risk their lives on the breakwater, but were later seen dangerously close to being swept into the sea.

In April this year a local surfer suffered horrific facial injuries from powerful waves at the harbour entrance in Portreath, Cornwall, that left left him needing a face lift.

Steve Bowens, 43, had been using a stand-up paddle board in when a 3ft swell wiped him out.

Two facial surgeons spent nine hours working on him, during which time he was cut from ear to ear and his face peeled forward allowing the perforation to be patched with muscle.  His cheek also had to be rebuilt and his eye suspended on titanium mesh.

Despite the toasty weather, a few people were surprised to see a light dusting of ‘snow’ on the ground. 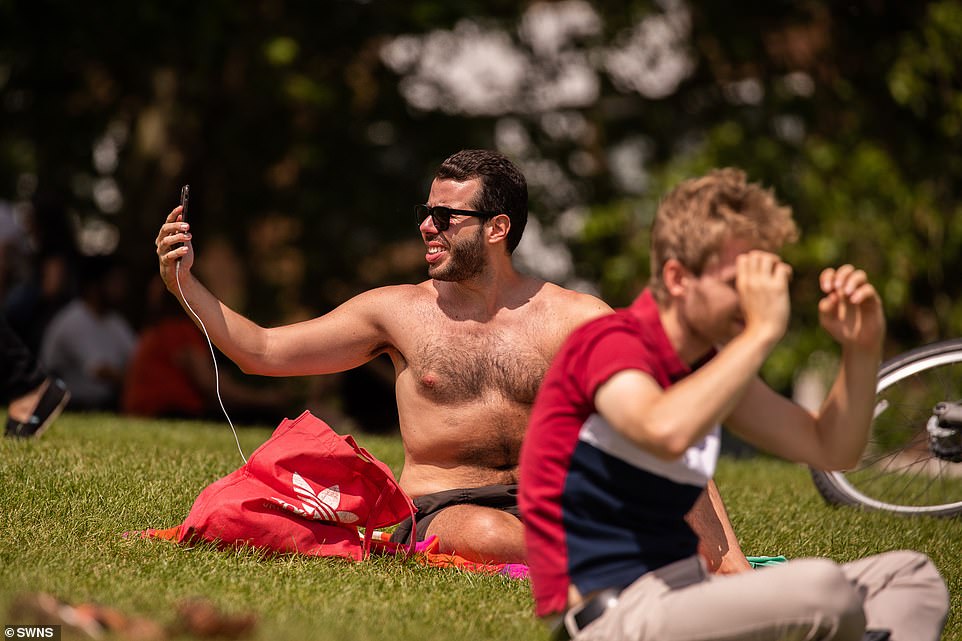 Yesterday saw park goers making the most of the sun and snapping selfies as they lay sunbathing on Primrose Hill, London 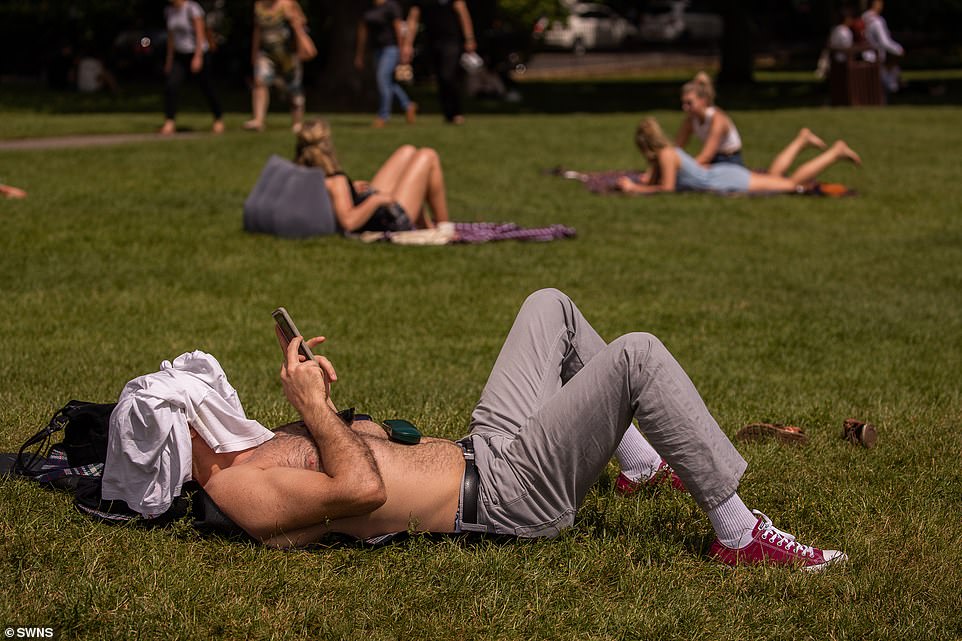 Willow tree seeds fell so thickly in some areas it looked like thousands of children had blown a dandelion clock at the same time.

Jane Street, of south-west London, said: ‘Lovely cycle today on the little Brompton – the park was covered in white fluff from the trees – it looked like summer snow.’

Elsewhere, cat owners were advised to apply a little sun cream to the ears of lighter-coloured or finer furred moggies to protect them from the UV.

The British Veterinary Association (BVA) also reminded dog owners to make sure their pets had plenty of water and fresh air.

Dogs, particularly flat-faced breeds such as pugs and bulldogs, are vulnerable to heatstroke. 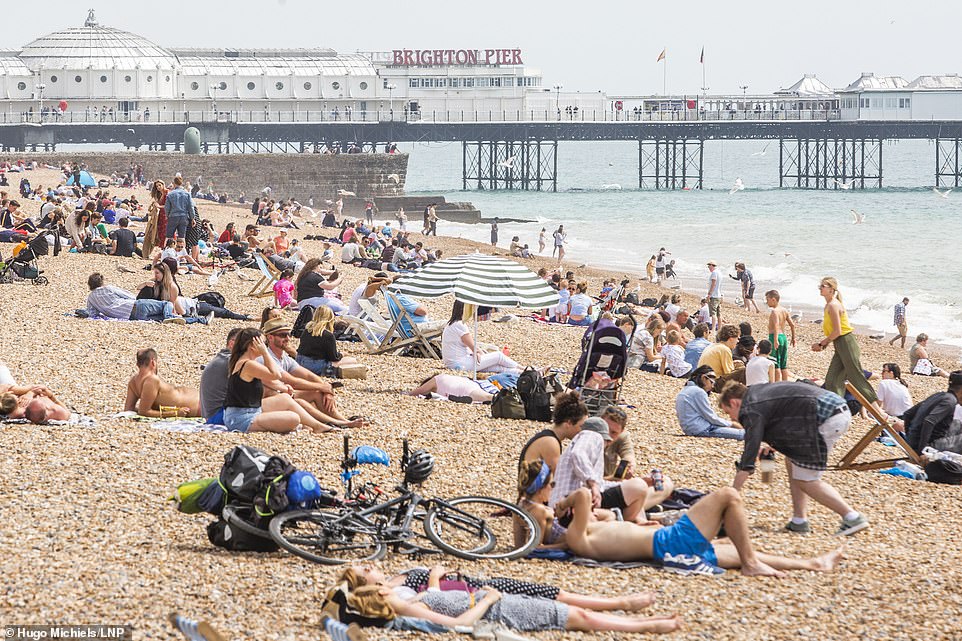 Brighton Beach was packed over the weekend, when temperatures topped 74F (28C) for large swathes of Britain