Winter is officially on its way as the wet and windy weather hit the entire UK earlier this week. And it is predicted to continue until mid-November with the south and western coastal counties likely to be worst hit.

According to WXCharts, up to 229mm of rain is expected to fall between today and November 10.

Wind gust is predicted to reach a staggering 128km/h by November 13 as Atlantic storms hit the country.

BBC Weather said: “A barrage of Atlantic fronts and low pressure systems will continue to dictate our weather this week.”

They forecaster predicted heaviest and most frequent showers will hit the hills and mountains of Wales. 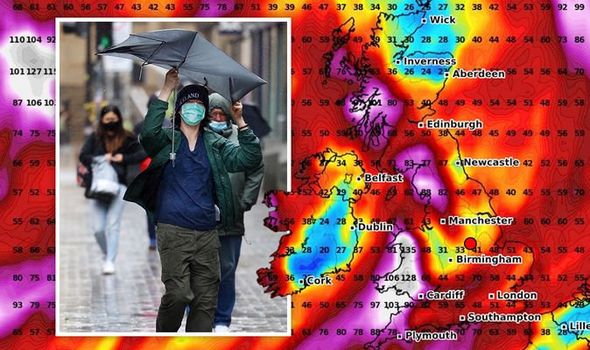 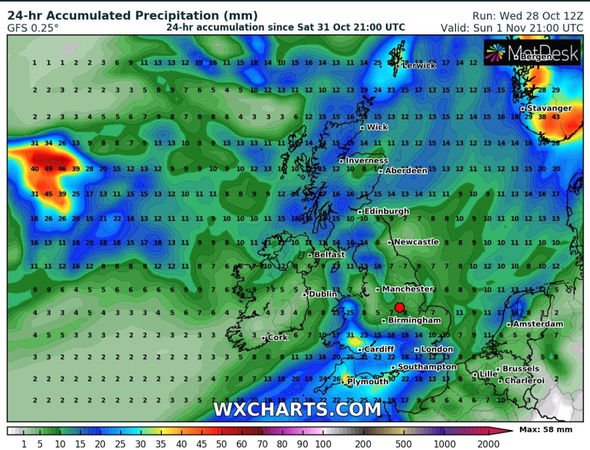 There is a potential risk warning of hail and thunder as the weather takes a dramatic turn.

BBC forecasters said today: “A change is likely after mid-November, when colder air from the Arctic and showery weather should extend southwards more often.

“Some heavy showers at times, falling as sleet, hail and even snow, especially over the mountains in the north.

“Colder by day and sharper frosts by night, on some nights.” 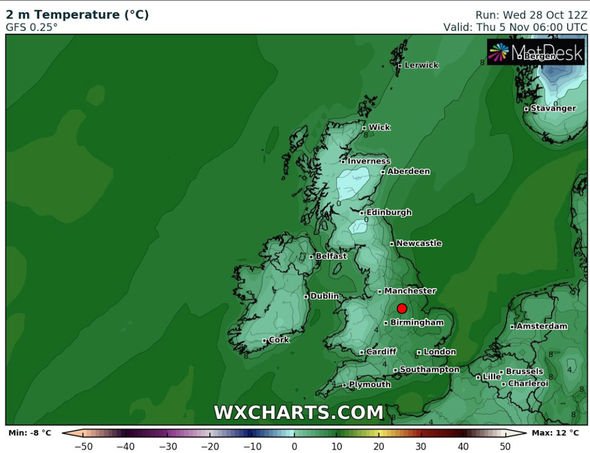 By tomorrow, Atlantic fronts will push north-east bringing copious amounts of rain to the north and west of the country.

Temperatures are expected to peak at 18C on Friday and Saturday across the south-east of England.

However by November 5, temperatures will have dropped to just 12C across most of the country.

Further rain and winds are likely to sweep across the country but there will be drier spells between the miserable weather. 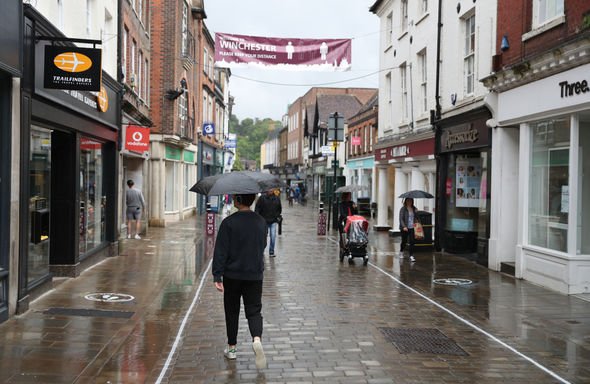 Met Office chief meteorologist Andy Page said: “Until the end of October we are looking at an unsettled spell of typical autumnal weather which will dominate the forecast.

“Every year we expected the remnants of decaying tropical hurricane to disrupt conditions when they enter the North Atlantic.

“The remnants of former Hurricane Epsilon have been subsumed into another deep area of low pressure to the south-west of Iceland, and although the low centre is a long way from our shores and won’t cause disruption, the trailing weather fronts associated with this system will bring wind and rain to the UK, along with a potentially heavy swell.

“However, it is rain rather than wind that will dominate our attention later in the week with a so-called ‘warm conveyor’ set up to bring a flow of very moist and warm air to the UK from further south in the Atlantic, triggering heavy rainfall for high ground in the west of the UK. 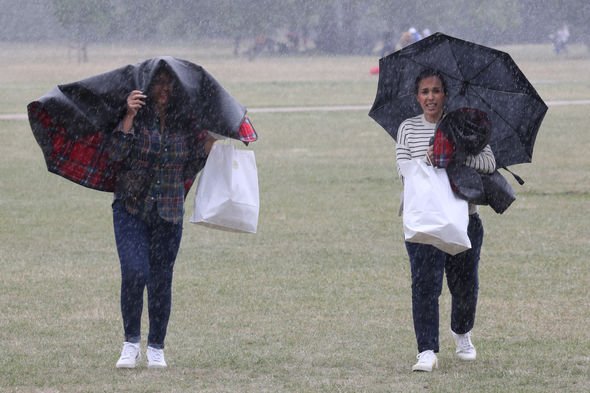 “We have issued a Yellow warning for rain covering parts of Wales, South West Scotland and North-west England for Thursday and Friday as additional rainfall in these areas may lead to impacts, including flooding.

“Across the warning areas accumulations of 30-40mm of rain can be expected, while isolated areas exposed the strong south-westerly winds could see 50-80mm.

“We expect the heaviest rainfall to occur in the mountains of Wales where some areas could witness 130mm of rainfall.”

The weekend could see potential remnants of ex-Hurricane Zeta to bring further heavy rain to parts of the UK.

But Mr Page said the Met Office will continue to monitor the situation and issue warnings were necessary.

Currently across England there are eight flood alert warnings across most of the south of the country.

The likes of Cornwall and Devon have been issued flood warnings as the winter weather approaches.