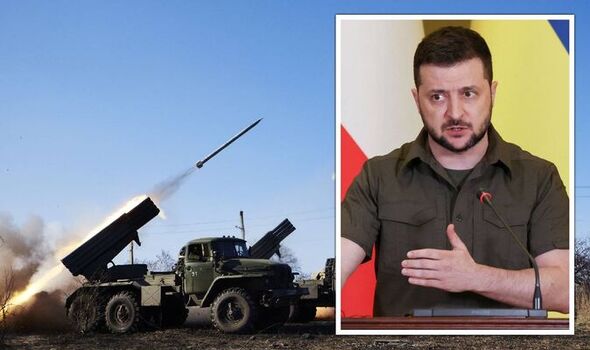 Regaining control of the areas around the Black Sea coast is vital to the nation’s economy, said defence minister Oleksii Reznikov. And he revealed that President Volodymyr Zelensky yesterday ordered his military to retake besieged areas including the ­shattered port of Mariupol.

“The president has given the order to the supreme military chief to draw up plans.”

The defence minister said with Nato weapons arriving, including from the UK and US, Ukraine was now training up its forces to launch a massive counter-attack.

He added: “Ukraine had Soviet-era weapons and 30-year-old doctrine. We changed this in three months.

“We need more, quickly, to save the lives of our soldiers. Each day we’re waiting for howitzers, we can lose a hundred soldiers.”

Ukraine estimates it will mobilise some one million troops but counter-attacks are already underway in some areas formerly over-run by Russian forces including Kharkiv, where tanks and a truck with ammunition were destroyed.

Residents in southern cities Kherson and Zaporizhzhia were yesterday warned to evacuate.

Ukraine’s deputy prime minister Iryna Vereshchuk said: “It’s clear there will be fighting, there will be artillery shelling and we therefore urge [people] to evacuate urgently.”

There was also a furious response from President Zelensky, accusing Moscow of deliberately targeting civilians in an attack which left at least 15 civilians dead at the weekend. He promised “punishment is inevitable for every Russian murderer”.

Rescuers continued a frantic search for survivors in Chasiv Yar, a town in eastern Ukraine, with 20 people feared buried in the rubble of an apartment block targeted by the Kremlin’s rockets.

The strike destroyed three buildings in a residential quarter, inhabited mostly by people who work in nearby factories. Zelensky added: “Everyone who gives orders for such strikes kills absolutely deliberately. All those who carried out this shelling, all those who hit our cities – they will all be found.”

Elsewhere, two civilians were killed and at least two others injured in a missile attack on Siversk, near Sievierodonetsk, and three hurt by shelling in Soledar, Donetsk. Seven houses were burned down in Bakhmut, Luhansk.