Baghdad: US forces have quietly sent at least 30 suspected foreign Islamic State fighters captured in Syria last year and in late 2017 to stand trial in Iraq, interviews with the men, Iraqi sources and court documents show.

At least one of the men is Australian.

Three have been convicted of IS membership and sentenced to death by Iraqi courts, while five have been given life sentences. Four of them told Reuters they were tortured in prison, a claim Reuters was unable to verify. 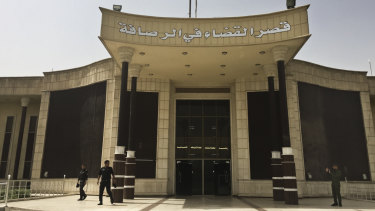 Security guards stand outside the building where Islamic State militants are tried in a special counterterrorism court in Baghdad, Iraq. Credit:AP

Iraq's Counter Terrorism Service denied that detainees were transferred to their custody from Syria in 2017 and 2018, and denied the detainees' claims of torture.

While the fate of thousands of IS fighters captured in Syria remains unresolved, the roughly 30 suspected foreign jihadists were transferred to Iraq in 2017 and 2018 after they were captured by the US-backed Syrian Democratic Forces, according to Iraqi court files, US detention records, intelligence and judicial sources as well as people familiar with the matter.

The US military's Central Command, which oversees US forces in the Middle East, declined to comment on Reuters' findings, but acknowledged the challenges posed by detainees captured by Kurdish militias such as the SDF, whose authority is not internationally recognised.

The United States wants countries to take responsibility for their foreign fighters through "prosecution, rehabilitation programmes, or other measures that sufficiently prevent detainees from re-engaging in terrorism", he said.

"We remain engaged with a wide range of international partners to ensure that these foreign terrorist fighters never threaten anyone again."

Eight men convicted for their role in IS – from Belgium, France, Germany, Australia, Egypt and Morocco – were interviewed by Reuters during their appearances in Iraqi courts.

The sub-contraction of trials … to an ill-resourced, under-funded, ill-equipped criminal justice system [is] … an abrogation of responsibility.

They said that after being captured in Syria by US-backed SDF forces they were interrogated about their roles in Islamic State by the SDF and US forces. They said they were then held, mostly in solitary confinement, at US military bases in Iraq's Kurdistan Region or in Jordan before being handed into Iraqi custody.

The SDF declined to comment on the question of prisoner transfers, referring Reuters to Iraqi authorities. The SDF has said it wants to get rid of foreign fighters because it is not in a position to put them on trial.

US President Donald Trump is pressing European nations to take back their nationals from among more than 2000 suspected foreign fighters captured during the final battles to destroy the group's self-declared caliphate in Syria earlier this year. 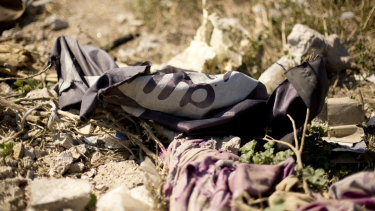 The US and European allies have held talks with Baghdad on a possible bulk transfer of prisoners from Syria to be prosecuted in Iraq since the start of the year, Western diplomats, Iraqi and US officials say.

There is no common European policy on how to handle detained foreign fighters from Europe. But Iraq has shown it is willing to prosecute.

Prisoner transfers are not prohibited under international law if they come with human rights guarantees, but that applies to transfers between states – not a non-state actor such as the SDF.

"The sub-contraction of trials … to an ill-resourced, under-funded, ill-equipped criminal justice system in Iraq can only be described as an abrogation of responsibility," said Fionnuala Ni Aolain, UN special rapporteur for human rights while countering terrorism.

Iraqi judicial officials did not respond to requests for comment.

But some prisoners have already been sent to Iraq.

An Iraqi military intelligence source said foreign IS detainees had been handed over by the SDF to US forces in 2017 and 2018 inside Syrian territory, and were transported by air to Iraq.

Among them is Belgian Bilal al-Marchohi, 23, who was sentenced to death on March 18. A spokesman for Belgium's prime minister declined to comment on his case, but a consular official was present at his trial. 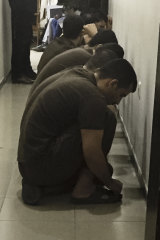 Suspected Islamic State militants wait their turn for sentencing at the counterterrorism court in Baghdad, Iraq.Credit:AP

Marchohi said he was shuttled between multiple facilities in Syria before being taken to Iraq. He was held by the SDF in a house and a former school, then moved to a facility "where there were only Americans" and next flown – blindfolded and bound – by helicopter to another site. Marchohi said he was kept in solitary confinement, under constant bright lights with few toilet breaks.

"The Americans threatened me, my wife and kids," he said. "They said, 'we can put a bullet between your two eyes.'"

He said he signed a blank confession, which was later filled out by Iraqi authorities to detail his activities in Syria. It appeared to have been changed later to show he was arrested in Iraq, according to his court file, seen by Reuters. In the court file, there is also a reference to his detention by the US military for two months at base in Iraq.

The other seven suspected fighters who spoke to Reuters in Iraq said they were also arrested by the SDF, or by the SDF and US forces, in Syria and then held in US detention.

Foreign militants like Marchohi – who served in the IS religious police, according to court documents – held elite status within IS ranks. At their trials, judges described the men as battle-tested fighters.

German Levent Ozgurt, 24, said he was detained near Aleppo in Syria by the SDF in November 2017 and also flown by helicopter to a US base in northern Iraq, where he was held in solitary confinement.

The German foreign ministry said it had no evidence of his transfer from Syria to Iraq.

Marchohi and Ozgurt said they were told by US forces that they would be repatriated when their interrogations ended.

Instead, they were handed to Iraq's Counter Terrorism Service, which they said beat them, held them in stress positions and gave them electric shocks via cattleprods to their genitals.

Marchohi showed Reuters scarring he said was from beatings and electric shocks. Ozgurt showed Reuters similar marks on his back at a court appearance where he was sentenced to death on December 4. Germany's ambassador to Baghdad was present at the trial.

The eight detainees also told Reuters confessions used to prosecute them were falsified. Six said they were coerced into thumb printing the typewritten confessions through torture. Iraqi authorities denied the claims.

Counter Terrorism Service spokesperson Sabah al-Naaman said any claims that detainees were transferred to their custody from Syria in 2017 and 2018 were untrue, and denied they had been tortured.

"IS members know how to tell lies to mislead judges in order to evade prosecutions," Naaman said.