Vicar, 60, is defrocked after pocketing more than £60,000 from ‘matrimonial conveyor belt’ of almost 500 sham weddings 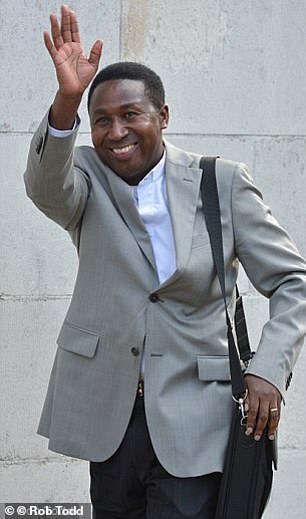 Reverend Nathan Ntege, 60, was alleged to have overseen a ‘matrimonial conveyor belt’ of Eastern European brides at his parish in south east London

A vicar suspected of being at the centre of Britain’s biggest sham marriage racket has been blacklisted by the Church of England.

Reverend Nathan Ntege, 60, was alleged to have overseen a ‘matrimonial conveyor belt’ of Eastern European brides at his parish in south east London.

A jury was told weddings at his church rocketed from six a year to up to nine a day – with chaotic ‘cattle market’ scenes of brides who seemed to scarcely know their grooms hurriedly squeezing into ill-fitting shared wedding dresses in the lavatories.

But despite the case against him being dismissed on the judge’s orders, he has now been defrocked after the Diocese of Southwark carried out its own investigation.

A disciplinary panel has now ruled that the vicar pocketed £60,000 in wedding fees that should have been paid to the church and he should be struck off. They also concluded he had failed to maintain marriage records properly.

In 2014, Ntege was accused of conducting a ‘matrimonial conveyor belt’ of sham weddings at St Jude with St Aidan Church in Thornton Heath.

The reverend, then 55, also of Thornton Heath, allegedly married nearly 500 bogus couples and faced 14 counts of facilitating a breach of immigration law and one count of fraud.

The prosecution claimed immigration officials became suspicious of the ‘inordinate number’ of weddings at the parish church.

But the case at Inner London Crown Court collapsed after the judge accused immigration officers of lying on oath. 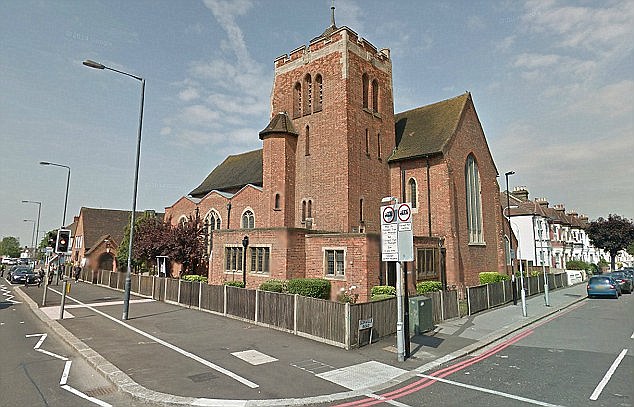 But despite the case against him being dismissed on the judge’s orders, he has now been defrocked after the Diocese of Southwark’s carried out its own investigation. Pictured is St Jude’s and St Aidan’s in Thornton Heath, south London, where he preached

Now the church has revealed the results of the church’s own investigation, which was sparked by a complaint made by the Archdeacon of Croydon, the Venerable Christopher Skilton.

The report says Ntege was licensed as priest in charge at St Jude in January 2002 and installed as vicar in February 2007.

The fees due to the Diocesan Board of Finance for the 475 weddings should have been £66,912 but ‘no fees had been remitted to the DBF in this period’, the report said.

The investigators concluded that the vicar must have ‘retained fees in the order of £60,000’ even allowing for some deductions.

The Archdeacon’s complaint was first made in 2017 but there were a series of delays, with the vicar constantly applying for adjournments, claiming he had a bad back.

But the hearing was finally held in November and now it has been announced that the vicar has been fired and placed on a lifelong clergy blacklist.

The panel concluded the vicar ‘had knowingly engaged in systematic wrongdoing over a period of several years.

‘He had wrongfully retained substantial sums of money which he knew should have been remitted to the DBF and had done so over a sustained period of time. 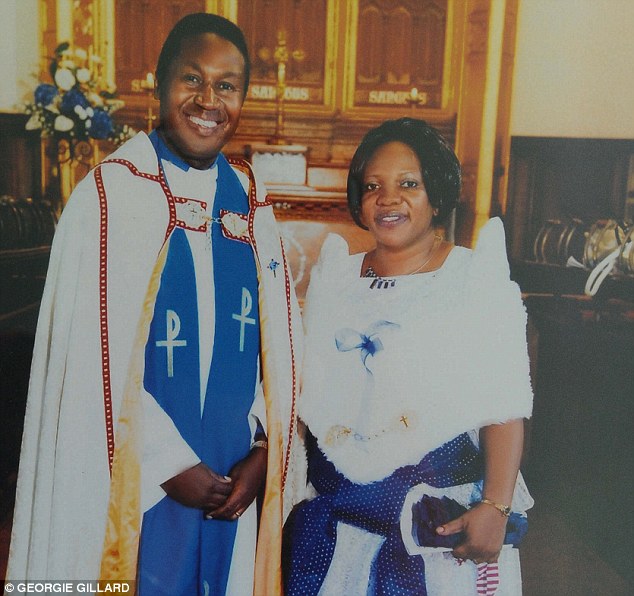 Pictured: The Rev Nathan Ntege with his wife Elizabeth in Kampala, Uganda

‘Moreover, the respondent had, in the view of the panel, not demonstrated any remorse in relation to his conduct.

‘His response to the complaint demonstrated a refusal to accept his wrong doing and a willingness to make false accusations against others.

‘Accordingly the panel ordered that the respondent be removed from office with immediate effect, that he be prohibited for life from the exercise of any of the functions of his orders, and his name be entered on the Archbishops’ List,’ the report said.

Rev Ntege, who was born in Uganda, claimed he had not been given training or support in maintaining church registers.

He also said his previous ministry had been outside the Church of England, so he had therefore left the completion of the registers to the parish administrator and was not to blame for the errors.

But the tribunal concluded ‘the deficiencies were clear even on the briefest perusal of the records.

It was also noted that the forms had been properly filled in during the earlier part of the vicar’s ministry at St Jude’s.

After, by, CofE, defrocked, Vicar
Celebrities