Victoria is in talks with the Morrison government to boost vaccine supply to inoculate up to 120,000 more Victorians a week as the state negotiates to pay GPs to give more doses on weekends and catch up with NSW, which is a month ahead in the race to 70 per cent.

High-level discussions are underway to send more vaccine shots to Victoria after months of supply top-ups to NSW, with Victoria forecast to hit the first-dose target a month after its northern neighbour. 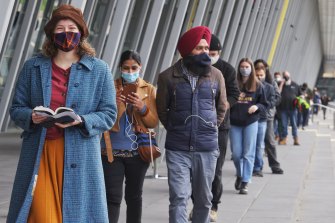 People waiting to get vaccinated at the Melbourne Convention Centre on Friday. Credit:Luis Enrique Ascui

“We’re asking for as much as possible and the conversations with the Commonwealth are encouraging,” a state government source, speaking anonymously to detail the confidential talks, said.

The state government is also considering direct payments to GPs to encourage them to vaccinate patients on weekends when subsidies in the federally run scheme often fail to cover wage costs. NSW is vaccinating 300,000 more people a week and the major difference between the states lies in the number of doctor-administered doses.

Authorities called out Melbourne’s western suburbs as a particular concern as Victoria recorded 79 new local cases on Friday, with 53 linked to known clusters and 19 isolated for their entire infectious period. NSW recorded 882 new cases, a drop from more than 1000 the previous day.

Children aged between 12 and 15 have been added to Australia’s COVID-19 vaccine rollout, after the federal government’s expert vaccine panel recommended they be given the Pfizer vaccine.

More than 785,000 jabs were delivered in NSW in the week to Wednesday compared with 447,000 in Victoria as it continued to lag behind the ACT, NT, Tasmania and NSW on total per capita doses. In Victoria, 53.2 per cent of the population has received one dose and 32.2 per cent has had two. In NSW, these figures are 62.8 per cent and 33.8 per cent.

Data from covidlive.com.au shows, at current rates, Victoria will achieve 80 per cent of first doses by October 15 and 80 per cent second doses on November 17. The same targets are projected to be hit by NSW on September 10 and November 4. However, changes to the interval between doses in both states mean the projections are not perfectly comparable.

Health Minister Martin Foley said on Friday there had been “incredible” demand for Pfizer bookings since his government opened up eligibility for people aged 16-39 on Tuesday. “Hesitancy is not a problem for people in those age groups,” he said. “We need more supply.”

Victoria’s state hubs have the capacity to vaccinate about 230,000 people a week but the government could scale this up to 350,000 within weeks if supply is secured, the Victorian government source said. The state receives about 100,000 Pfizer vials each week, not including one-off top-ups, and officials are pushing for larger weekly allotments as soon as possible.

The Andrews government has also moved to target the vaccination of essential workers – who have driven much of the spread in recent outbreaks – by opening a vaccine site in Sunshine North to cater for workers in freight, food distribution and other sectors in which employees cannot work from home.

The supply push comes after prominent epidemiologists Catherine Bennett and Tony Blakely put forward options for Victoria to ease the lockdown slightly, ease the mental health burden and focus on rapid vaccination as the path out of lockdown rather than aiming to drive cases close to zero.

Victoria began to scale up its vaccine rollout in May when an outbreak of the Kappa variant caused the state’s fourth lockdown.

In early June and after weeks of delivering a large number of vaccinations the state almost ran out of supply and the program needed to be scaled back, the government source said. NSW’s outbreak began in the same period and since then NSW has received multiple one-off boosts and a greater share of the national pool from the Commonwealth.

Victoria’s state hubs do the heavy lifting in the state whereas GPs play a proportionally bigger role in NSW’s program. Of the total 6.3 million jabs in NSW, 64 per cent were given out by GPs while about half of Victoria’s 4.6 million vaccinations were administered by doctors.

The Victorian government is working with GP groups to simplify eligibility rules program and ramp up the number of vaccinations administered by doctors. Its announcement on Tuesday to offer Pfizer to people under 40 was designed partly to provide certainty to GPs who were frustrated that changing vaccine advice was causing confusion about who was eligible to receive which vaccine.

The GP-focussed delivery model favoured NSW because doctors play a more prominent role in NSW’s healthcare system. About 22 per cent of the GPs involved in the vaccine rollout are in Victoria, a smaller proportion than Victoria’s share of the total population which is 26 per cent

Dr Mukesh Haikerwal, a former Australian Medical Association president, said confusion over eligibility and the safety of AstraZeneca meant many Victorian doctors decided not to take part. As doctors grew apprehensive due to vaccine supply concern, the Victorian government filled the void by announcing mass hubs weeks before NSW, entrenching the comparatively outsized role of the state-run delivery system in Victoria.

“We’re still doing more than 50 per cent of the total vaccines in Victoria, but that’s despite the system, not because of it,” Dr Haikerwal said.

Dr Haikerwal said a key barrier for GPs entering the program was the “paltry” federal vaccine payment which he said meant some doctors lost money on weekends when wages were higher.

The state government is in talks with GPs to cover the cost of higher labour costs to allow more GPs to deliver vaccines on weekends, he said.

Dr Haikerwal said the federal government had also been slow to approve applications by GPs to join the program, though he acknowledged the complexity of this task.

The western suburbs doctor, whose Altona North clinic has given out 15,000 vaccines, said local primary health networks in NSW were more successful in collaborating and subsidising GPs to ensure many of them were supported to join the vaccine rollout.

“Doctors are happy to take a hit in order to be part of it, but they don’t want to lose money … They haven’t been enabled or supported to do it,” he said.

He said doctors in the west were coming together to pool staffing resources in the hopes of using Whitten Oval, the home of the Western Bulldogs, as a large-scale vaccination site run by private clinics with the support of local councils.

There are also calls for more Victorian pharmacies to be included in the rollout, with 40 per cent fewer pharmacists approved by the Commonwealth in Victoria compared with NSW.

Anthony Tassone, president of the Victorian branch of the Pharmacy Guild, said many Victorian pharmacies had not been included in the program until this month, whereas they were activated earlier in NSW due to its more serious outbreak.

“If they had been brought on sooner, we could have more vaccines in arms. We need the approved stock of vaccines available to Victorian pharmacies as soon as possible,” he said.

Victoria’s vaccine program has also been set back by the federal government’s surprise announcement to open up Pfizer eligibility for young people last week. For weeks prior, the Andrews government was encouraging younger people to receive the AstraZeneca jab at state hubs, but 10,000 of these bookings were being cancelled each day following Prime Minister Scott Morrison’s announcement.

Premier Daniel Andrews and Chief Health Officer Brett Sutton have consistently advocated for the efficacy and safety of the locally-manufactured jab, which is stockpiled in its millions but has been unpreferred due to a rare clotting side effect that prompted shifting federal advice and occasionally alarmist media reporting.

The repeated pro-AstraZeneca commentary from Mr Andrews and his health chief has been reflected in the number of AstraZeneca jabs given in Victoria’s state-run hubs. Victoria has given out about 600,000 AstraZeneca vaccines at state hubs while no other state has administered 250,000.

Stay across the most crucial developments related to the pandemic with the Coronavirus Update. Sign up to receive the weekly newsletter.