Victoria is Covid-FREE: State has zero active cases for the first time in more than 260 days as last patient is released from hospital

Victoria is officially COVID-free after the last patient from the state’s horror second wave was released from hospital.

The state’s last active case, a man in his 90s, was discharged from Monash Medical Centre on Monday.

It is the first time since February 21 there have been no active coronavirus cases in Victoria’s hospitals.

The man’s departure follows his wife’s, aged in her 80s, who was discharged from the same hospital on Thursday.

The husband and wife spent more than a month battling the virus at the Melbourne health facility and were at one point critically ill.

Victoria has no active coronavirus cases for the first time since February after a man, aged in his 90s, was released from Monash Medical Centre (pictured) on Monday

To the amazement of medical teams, the elderly couple’s health miraculously turned around after they were reunited with family members who were brought into the hospital to say their goodbyes.

‘For this family it has been a bit of a rocky road,’ Dr Stuart told the Herald Sun.

‘The whole treating team have gone on that journey with them, from being really concerned to now waiting out for us to release them as the last person from isolation in Victoria. It’s a pretty remarkable story.’

The couple, who were part of the Chadstone Shopping Centre cluster, had been the only patients with COVID-19 in the hospital since November 1. 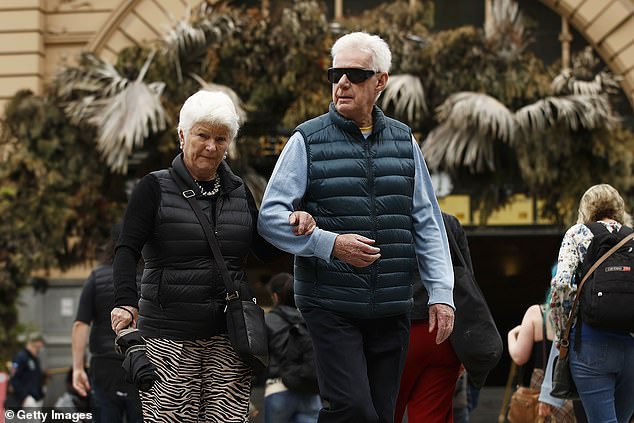 Pictured: A couple walk through Melbourne on Monday as the state celebrates more than three weeks without virus deaths or new cases

Australia’s first case of coronavirus, a man who had travelled from Wuhan to Melbourne, was first identified by Dr Stuart in the hospital on January 24.

On Monday, Victorians were reunited with cut-off interstate relatives, loved ones and friends, as the NSW border re-opened to end more than four months of exile.

Sweeping changes have come into effect across Victoria this week, with masks no longer needed outdoors unless people are unable to safely physically distance.

They must still wear masks in indoor environments including workplaces, supermarkets and public transport, and carry them at all times.

Melburnians have been required to wear face masks outside since mid-July and the rule was extended to regional Victoria in early August.

Other tweaks from Monday include 15 home visitors allowed per day, up from two, while limits on outdoor public gatherings rise to 50 people. 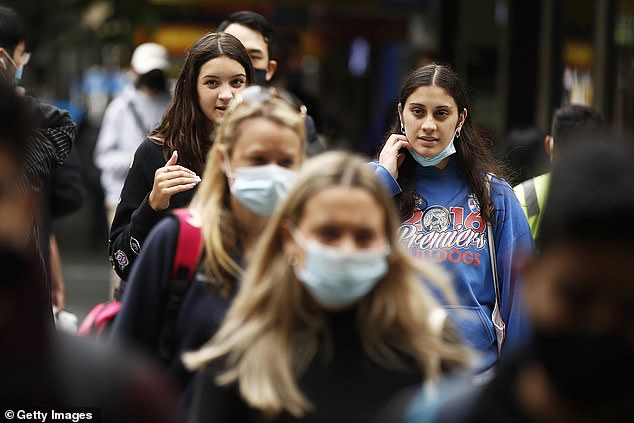 Melburnians have been required to wear face masks outside since mid-July and the rule was extended to regional Victoria in early August. Pictured: people are seen without face masks on November 23 as restrictions were eased

For weddings and funerals, 150 people will be able to come together to celebrate or commiserate.

The same limit applies to cinemas, galleries and museums, and large-scale events can resume if granted a permit.

Large restaurants, cafes and pubs will be able to host up to 150 customers indoors, while smaller venues will be limited to 50 and must keep QR code records.

Premier Daniel Andrews outlined additional steps towards normality as well: Up to 30 home visitors per day from December 13 – just in time for Christmas – and 25 per cent of staff returning to workplaces from November 30.

The state’s virus death toll stands at 819, with the national figure 907.