By December 17, with Sydney's fresh outbreak of COVID-19 causing ripples, Melbourne woman Susie Meagher was having concerns for the plans she'd made for a fun break in Bondi.

Ms Meagher's family and two other families had split the $7300 price of a week in a large Airbnb house. As case numbers rose, she was among many who hit the phones trying to learn where they stood refund-wise only to discover no matter how far out they had booked, the stay was now deemed unable to be cancelled. 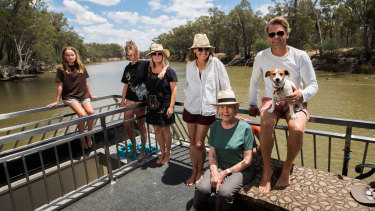 The Meagher family on board their plan B holiday accommodation, a boat on the Murray.Credit:Jason South

Not only did the owner of the Bondi property fail to reply in the weeks leading up to the January 5 booking to texts, calls and emails from Ms Meagher proposing he keep the deposit of $2500, return the rest and re-lease the house, she received an email on the check-in date stating the cancellation fee was the entire $7300.

"I think people at times like this need to support each other a bit," said Ms Meagher, from the deck of the family's intergenerational, plan B holiday, a house boat on the Murray River at Echuca.

"We spoke to [NSW] Fair Trading and just got to the point where we didn't know what we could do."

The group secured the boat after a family from NSW cancelled due to the pandemic – though, of course, Victoria's restrictions mean it cannot be moored on the NSW bank.

The family made good on their deal to rent their own home, in Bells Beach, to another family. (They spent the night before their Echuca escape at a friend's). Ms Meagher fully refunded several others who had to cancel stays in the small Airbnb they have on their property.

While people who have lost sometimes thousands of dollars to holiday service providers struggling with their own financial pain, those who spoke to The Sunday Age said they are well aware 3000 Victorians stranded in NSW are worse off.

Nevertheless there is frustration and confusion at the lack of consistent policies.

The Corsham family, from Melbourne, booked two short holidays for January, a week in a two-bedroom Airbnb in Coogee and another in Byron Bay. The Byron provider immediately offered a credit note but the Coogee owner said the booking was "non-cancellable".

They amended this to an offer of a 50 per cent refund minus an admin fee.

"I decided we were better off cutting our losses and asked for the refund, which turned out to be 50 per cent of $3900 minus a 'management fee' of another 22 per cent. So they were keeping 72 per cent," said Harry Corsham.

"Nobody's a winner here, pretty much everyone's a loser; the way the state governments are responding is very unpredictable when it comes to border closures."

He was eventually offered a credit and the family of five will go next year. Meanwhile, as plan B, they found a house to let in Jan Juc for a week with friends.

A spokeswoman for Consumer Affairs Victoria said it had been receiving increased reports regarding holiday accommodation since mid-December.

In Victoria if travel or accommodation cannot be provided for reasons beyond both parties' control providers must refund money, minus reasonable expenses.

A spokesman for NSW Fair Trading said since both providers and would-be holidaymakers were doing it tough in the pandemic, it was trying to balance the interests of both.

Sue Albert, of Surrey Hills, was pleasantly surprised to be given money back voluntarily by the NSW owner of a property in Jindabyne, which her family and another were using as a base for five days of cycling adventures around Thredbo over the New Year's break.

On day three, some of the group were cycling and some were making a New Year's Eve spread when frantic relatives began contacting them saying they had to get back to Victoria.

"The phone started and just didn't stop with people saying, 'You've got to get out of NSW before midnight' … It felt like an emergency evacuation," she said.

"There was a huge thunderstorm predicted … we had to pack up, leave $100 worth of half-prepared food for New Year's Eve there, throw everything into suitcases and load two cars up with nine people and seven bikes and drive two hours over the top of Mount Kosciuszko through torrential rain."

They made it to the border after a harrowing drive but could not find anywhere to stay in or around Beechworth so drove to Melbourne, arriving at 2.45am.

The riders arrived "with mud still all up their legs", such was the haste of the departure.

"It was probably 48 hours before we felt like, 'OK, what just happened?' The people who rented us the house for $2500 for five nights were lovely enough though to give us $1000 back." The gesture was appreciated as the family headed off for a less eventful second holiday, at more accessible Ocean Grove.