This is the moment a hospital worker took time out from fighting the Covid-19 epidemic to give a spontaneous dance performance in the lobby.

The University of Utah Hospital shared footage of Tuesday’s performance on its Twitter feed. It promptly went viral and sparked a hunt to identify the masked dancer.

The worker, who was wearing his blue scrubs, kicked off his shoes before launching into his graceful performance, with a volunteer accompanist playing the piano in the hospital lobby.

The dancer was later identified as phlebotomist Teva Martinson. 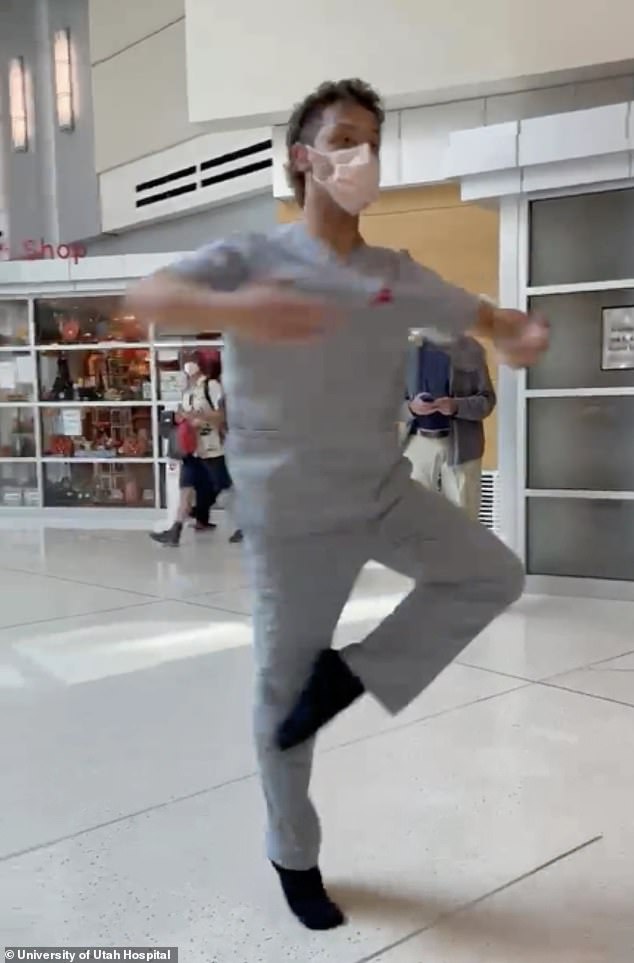 Teva Martinson, who is a phlebotomist at University of Utah Hospital, removed his shoes and began gracefully dancing across the entrance foyer on Tuesday 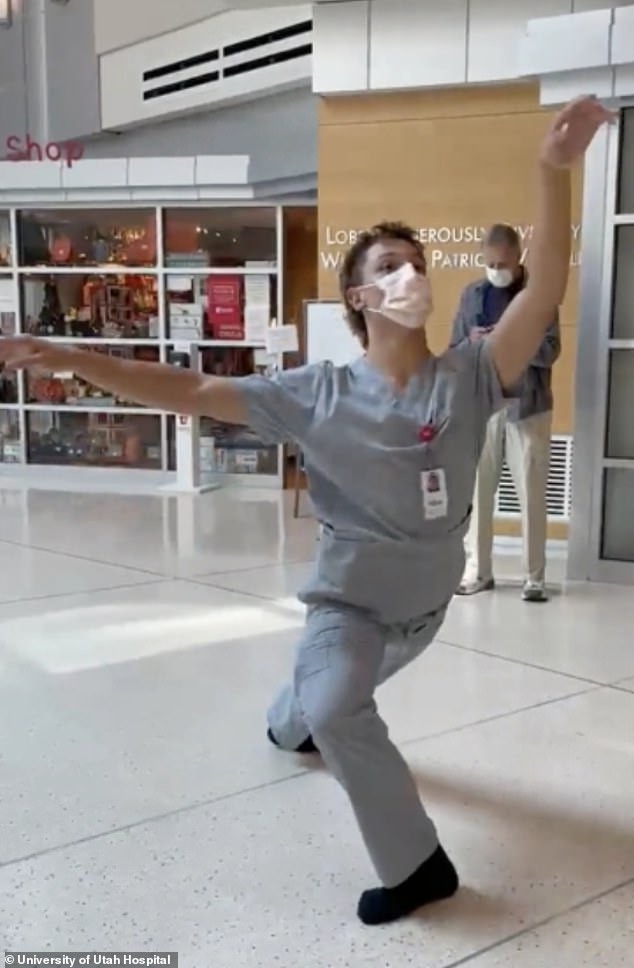 Footage of the dance went viral, prompting an appeal to identify the masked dancer before Teva was identified 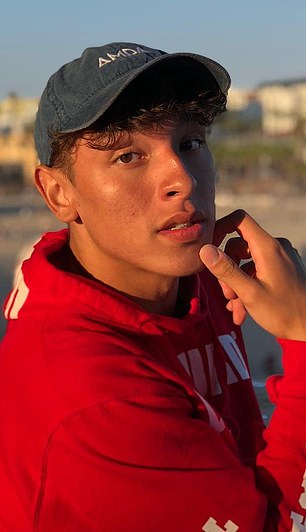 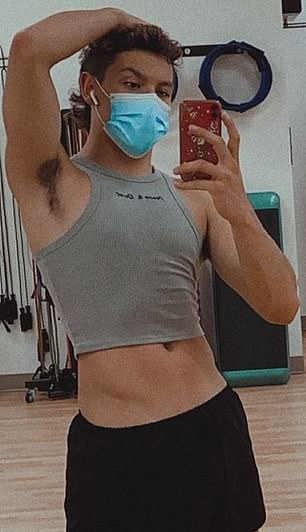 The hospital shared footage of the dance on its Twitter account, describing the performance as ‘a moment of pure joy’. One Twitter user wrote: ‘I’ve watched him dance multiple times at the studio he danced at! An amazing dancer!’

Patients and visitors were astounded by Martinson’s skills and viewers of the video asked if he had professional training.

The hospital shared footage of the dance on its Twitter account, describing the performance as ‘a moment of pure joy’.

Hospital spokesperson Kathy Wilets said: ‘As our healthcare workers deal with the stress of the current surge in COVID cases, this was a much needed moment of pure beauty and grace.’

Paul Keene replied to the hospital’s video: ‘That is amazing. In these times of trouble and pain for so many. We need beauty to living our hope and spirit.’

Another wrote: ‘I’ve watched him dance multiple times at the studio he danced at! An amazing dancer!’

So far 3.33 million vaccinations have been given in the state, with 1.52 million people being fully vaccinated, a rate of 47.5 per cent of the population. 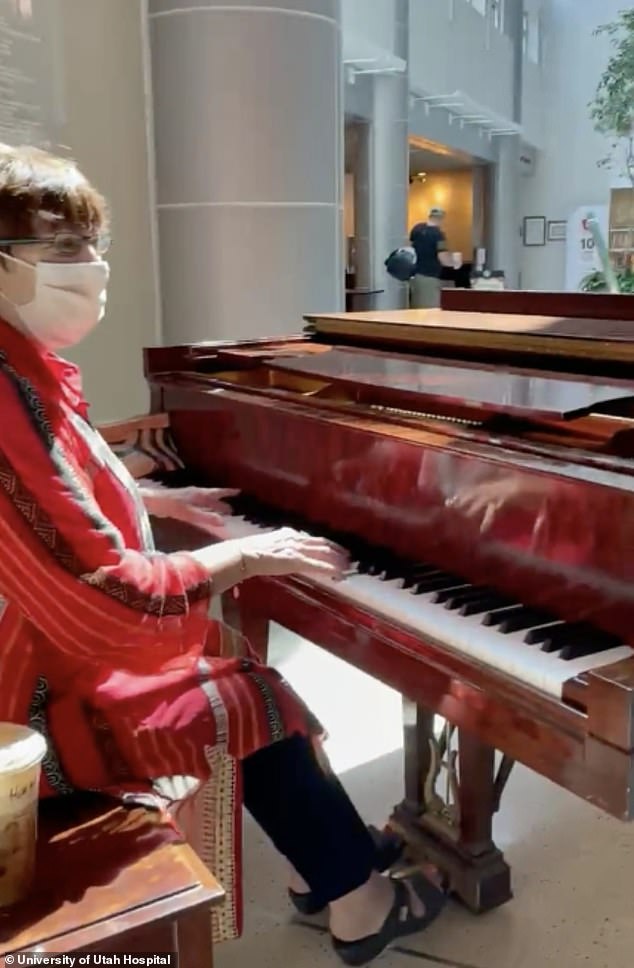 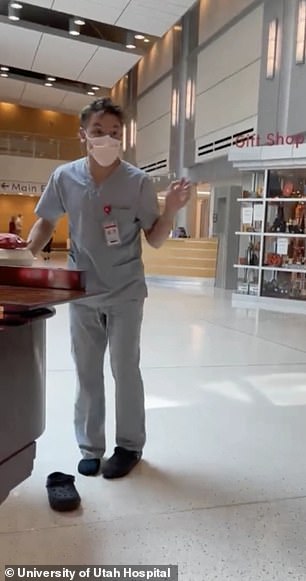 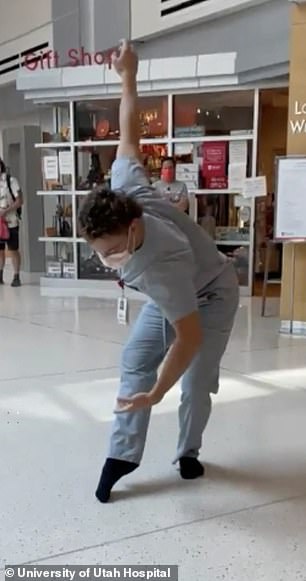 Martinson, who was wearing his hospital scrubs, kicked off his shoes and began dancing 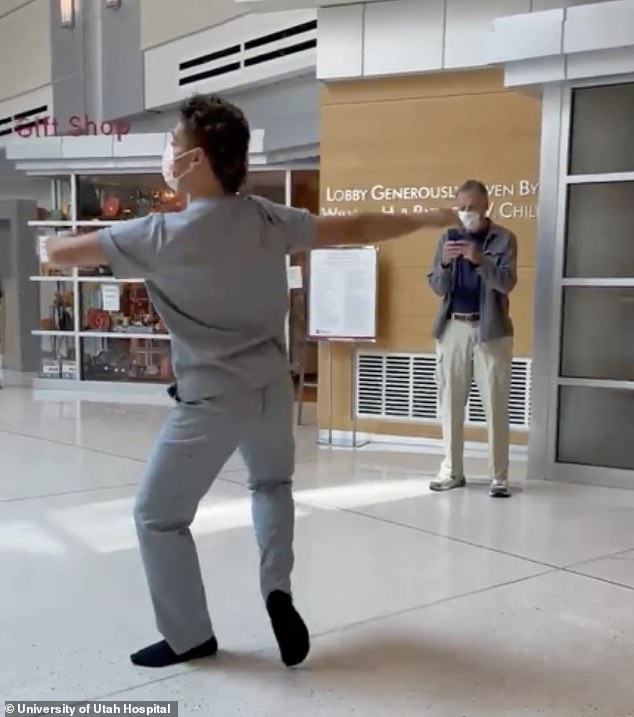 Visitors stood and watched while Martinson carried out his impromptu performance