‘I hauled the joystick and we did a loop the loop’: Boris compares his spell in Number 10 to flying a Typhoon as video shows thrill-seeking PM giving a thumbs up as he sits in fighter jet’s cockpit

Boris Johnson gave a thumbs up as he ignored the thrills and spills of the Tory leadership contest by sitting in the cockpit of a Typhoon fighter jet.

New footage reveals how the outgoing Prime Minister was delighted with his flight in the RAF aircraft while the race to replace him unfolded last week.

Mr Johnson even compared his recent thrill-seeking to his turbulent time in Number 10 in a speech to business leaders this morning.

The PM, who has just seven weeks left in office, told an audience at Farnborough Air Show: ‘After three happy years in the cockpit – and after performing some pretty difficult if not astonishing feats… I am now going to hand over the controls seamlessly to someone else.’

Mr Johnson’s flight in a Typhoon – which has a maximum speed of Mach 1.8 –  took place on Thursday during his visit to RAF Coningsby in Lincolnshire.

A video of the PM being given a demonstration of the jet’s capabilities shows him soaring above the clouds as he gives a thumbs up to an adjacent aircraft. 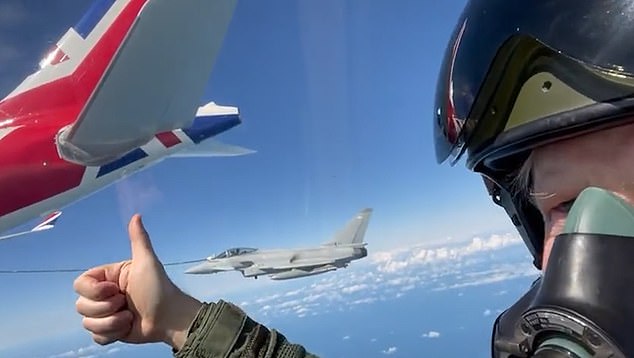 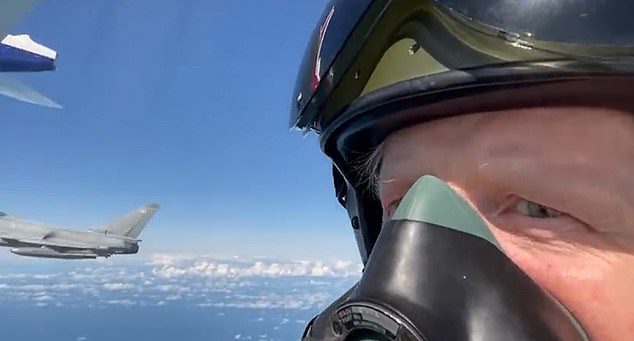 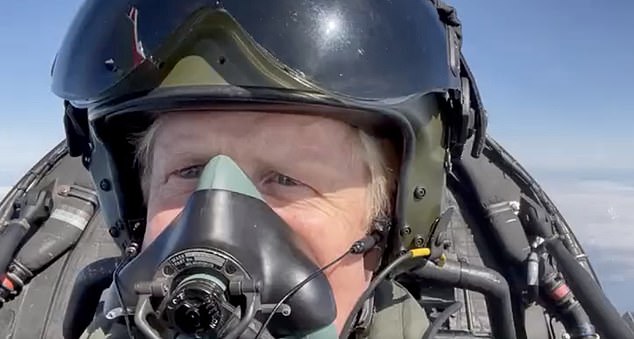 As a string of Tory contenders continued their battle to succeed him as PM, Mr Johnson took the flight at RAF Coningsby in the company of Wing Commander Paul Hanson.

He told the audience at Farnborough Air Show this morning how they went ‘straight up like a vertical firecracker’ when they took off in the Typhoon.

‘We generally put it’s through its paces,’ the PM said as he described his flight in a light-hearted speech.

‘After a while, the wing commander said to me: “Do you want to have a go?”

‘Then I did a more complicated thing called a barrel roll – I pushed the stick up and right a bit. 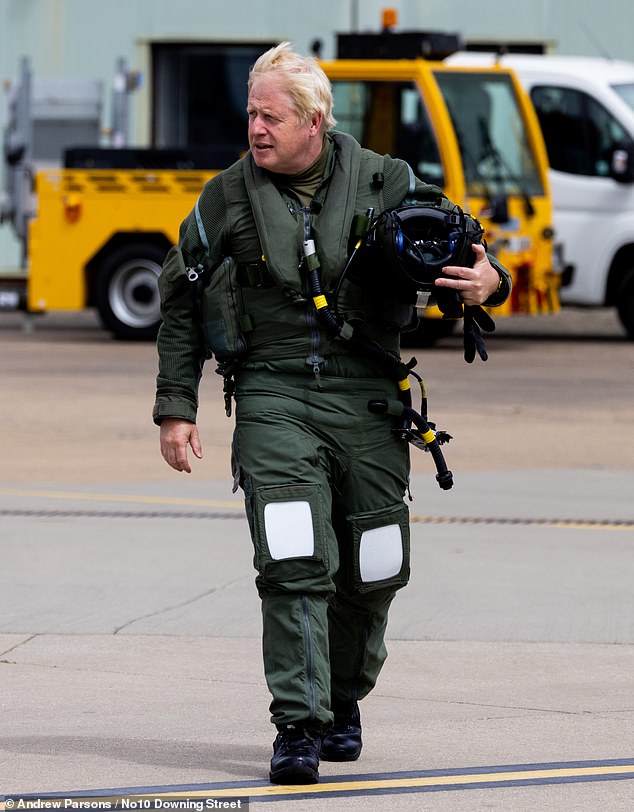 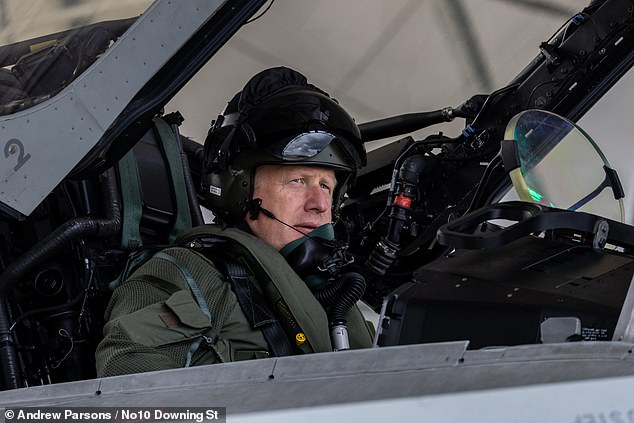 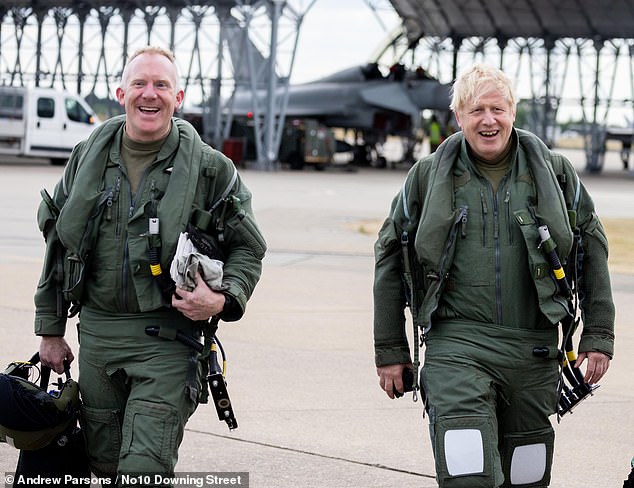 The PM then quipped: ‘And when I came back to consciousness, I could see the sea getting closer and closer and I started to dream about this incredible forest of windfarms I could see all over the North Sea.’

Mr Johnson hailed his Government’s ambitions for green energy to end ‘any dependence on (Vladimir) Putin whatsoever’ in keeping the National Grid going.

But, noting how both his Typhoon flight and his time in No10 had come to an end, he added: ‘This reverie must have gone on for quite a while because my colleague “I’m taking back control now” and we headed happily home.’

Mr Johnson later made light of the Tory revolt that has seen him forced out of Downing Street.

‘I leave it to you to imagine who at this stage I would like to send into orbit,’ he added in this morning’s speech.

‘Perhaps a volunteer can be found from the green benches of Parliament. I leave that entirely to you, into your speculation.’

After his Typhoon flight last Thursday, the PM hosted a farewell BBQ at his Chequers country retreat on Sunday for loyalist MPs and No10 aides.

The around 130 guests were said to have enjoyed burgers and English sparkling wine in the Buckinghamshire sunshine.

Mr Johnson was today attacked by Labour for having ‘clearly clocked off’ during his final weeks in No10 even as the UK faces extreme heat this week.

Shadow levelling up secretary Lisa Nandy argued there should be a dedicated Cabinet Office minister to co-ordinate an emergency response.

She also urged Whitehall to work with local areas to ensure resilience plans are in place to end the current ‘patchwork’ approach.

Ms Nandy told Sky News: ‘We think the Government ought to do a number of things: first is to turn up to work.’

She claimed Mr Johnson had ‘clearly clocked off’, adding: ‘And so have many of his ministers in his Government.’

But Kit Malthouse, the Chancellor of the Duchy of Lancaster, said it was a ‘very unfair criticism’ to attack Mr Johnson for not attending Cobra meetings on the heatwave.

The Cabinet Office minister, who said the PM had been fully briefed on the situation, told LBC Radio: ‘It’s literally my job to chair Cobra. The Civil Contingencies Secretariat sits in my department.”

He said Mr Johnson ‘appoints secretaries of state to do this kind of work and that’s what I’ve been doing’.