It may seem a hypothetical too far to imagine the trial of the Russian leader – an exercise in wish-fulfilment at a time when NATO is impotent even to stop his bombings of hospitals and at the Security Council Russia commands a veto that would stop any trial in its tracks.

But Vladimir Putin, at age 69, could live another 30 years, and who knows what may happen in that time – a coup, or a later government that surrenders him, like Slobodan Milosevic, in return for Western aid, or his capture in pathetic retirement like some old Nazi. It took 20 years to bring the butchers of the Balkans – Ratko Mladic and Radovan Karadzic – to justice, and Putin’s crimes are so serious that he should never be given immunity from prosecution. 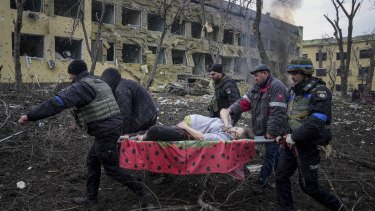 A pregnant woman is stretchered from a maternity hospital in Mariupol, after an air strike described by world leaders as a “war crime”. Credit:AP

He is guilty, beyond any reasonable doubt, of the crime of aggression. Proof of that guilt is easy because the crime – defined and added to the jurisdiction of the International Criminal Court as recently as 2017 – means the use of armed force for a “manifest” breach of the United Nations Charter by invading a sovereign country.

“Manifest” is judged by its “character, gravity and scale” and Putin’s invasion of Ukraine plainly satisfies that test, given its scale and the gravity of its consequences in terms of civilian deaths, heritage destruction and more than a million refugees.

At any trial, the prosecutor would have a simple task. The facts are demonstrable, easily proved by photographic evidence alongside testimonies of victims who witnessed bombings and killings and transcripts of Putin’s own public statements. The prosecution case would not need to be lengthy.

It is to be hoped Putin would retain good lawyers – their presence is necessary for any demonised defendant – but they would have a well-nigh impossible task in showing that Russia acted in self-defence, which is a permitted right under the UN Charter. However, it is nonsense to suggest that Ukraine posed a threat to Russia, or that Moscow was in any imminent danger of Ukrainian attack. There was a civil war in Donbas, but no danger that it would spill over into Russia, or could conceivably justify an invasion of Kyiv.

Putin’s advocates would be shackled with his own pretended defence, namely that he invaded in order to stop genocide. This would be permitted under the Genocide Convention, but his problem is that genocide requires an intention to destroy at least part of a group for racial or religious reasons. There is no way that the Ukrainian government or army had such an intention in relation to the citizens of Donbas – the claim is simply a lie.

Undoubtedly, for political purposes, Putin’s lawyers would seek to rely on what is called the tu quoque defence – namely “I did it, but you did it too” – see for example the Bush-Blair (and John Howard) invasion of Iraq in 2003. It is doubtful if this is a defence at all, although it had some salience at Nuremberg when Nazi admiral Karl Doenitz had to be acquitted for ordering unrestricted submarine warfare in the Atlantic after US admiral Chester Nimitz stepped forward to admit to giving similar orders to his submarines in the Pacific.

But there would be a simple, if technical, answer to this defence, even if the court allowed it to be run. The law of aggression as authoritatively defined, dates only from 2017: what happened in 2003, and on many occasions before, is irrelevant to the charge. And there were other differences.

There is no defence to Putin’s conduct. There will not be a jury, but international judges should convict and sentence him to imprisonment for whatever length of life he has left. The death penalty cannot be imposed by an international court. 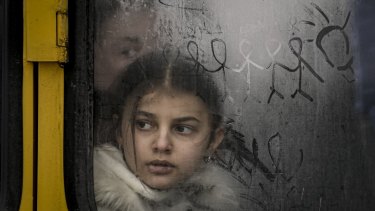 Civilians are evacuated from Irpin, on the outskirts of Kyiv, on Wednesday. Credit:Vadim Ghirda/AP

There are many other crimes – especially related to the targeting of hospitals and the killing of civilians – for which Putin bears what is termed “command responsibility”, even though he may not have known of them at the time they were committed. However, he will be liable to punishment for any failure to foresee them or to safeguard against them or to punish their actual perpetrators. The longer this war has gone on – certainly after its first week – Putin was aware of the war crimes committed by his forces and has remained insouciant, taking no steps to deter or punish the killings of civilians. These could be added to his indictment and tried separately.

Putin will not be put on trial in the Hague any time soon. Russia’s superpower veto at the Security Council will see to that. But it is important to recognise the overwhelming case against him and to have him treated as an international criminal.

Important, too, that Russian people should understand that they are led by a mass murderer, and cannot take refuge, like the German people after the war, in the claim that they did not realise their leader’s guilt as there was no clear law against aggression at that time.

And the international court prosecutor should continue collecting evidence – a successor may one day find use for it.

Geoffrey Robertson QC presided over the UN’s war crimes court in Sierra Leone. His latest book is Bad People and How to Be Rid of Them and is published by Penguin/Random House.