The far-right extremist was in Guimares, Portugal for yesterday’s semi-final with some of his supporters.

In footage taken outside the Estadio D. Afonso, the failed MEP can be seen surrounded by a group.

But Robinson appears fixated on another person in the distance.

It is not clear in the video what is said to spark the attack but a voice can be heard asking: “Who said that? Who said that?”

Moments later, the 36-year-old confronts a fan and punches him in the face.

The man in an England shirt is sent crashing to the floor and appears to struggle to get back to his feet.

“There’s no need for that, is there?” a man asks as he approaches Robinson.

Another man’s voice is then heard responding: “You’ll get knocked out again bruv.”

Supporters of Robinson can be heard shouting: “Go on Tommy lad.” 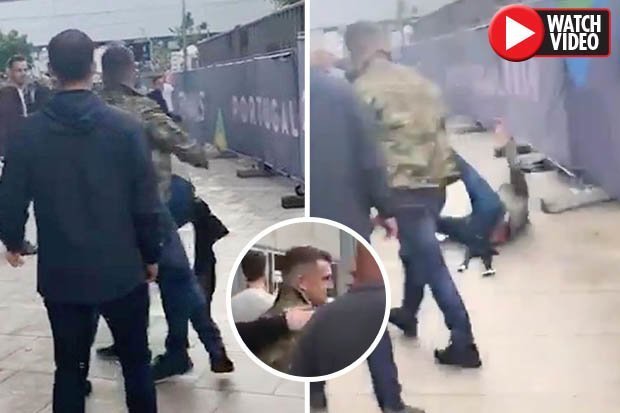 The English Defence League founder, real name Stephen Yaxley-Lennon, said he was in Portugal for the game on Wednesday.

“I’m in Portugal…at the game, no football banning order here mate,” he said in the clip.

Robinson was handed a banning order in 2016.

He is a convicted football hooligan, having led 100 Luton Town fans in a clash with Newport County supporters in 2010.

The incident comes just days after Robinson suffered a humiliating loss in his bid to represent the North West of England in Brussels.