Washington: President Joe Biden has made an emotional plea for the US Congress to pass gun safety laws, including a ban on assault weapons, after 10 people died in a mass shooting in Colorado.

Biden had previously said little about gun safety since his inauguration despite being a champion of gun control measures during his time as a US Senator.

“This should not be a partisan issue,” Biden said at the White House when making his call for firearm reform. 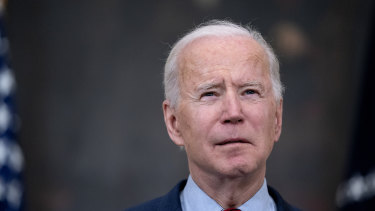 US President Joe Biden calls for a ban on assault weapons after the mass shooting in Boulder, Colorado. Credit:Bloomberg

“It should be an American issue. It will save lives, American lives. We should act.”

Biden said the Senate should take up bills already passed by the House of Representatives that would expand background checks for gun purchases.

Polls consistently show such measures are overwhelmingly popular with Americans, but they have been fiercely resisted by the National Rifle Association and other gun rights groups. 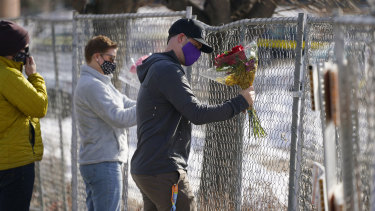 Kiefer Johnson places a bouquet of flowers into a makeshift fence put up around the parking lot outside a King Soopers grocery store where a mass shooting took place a day earlier, in Boulder, Colorado.Credit:AP

The President also called for a ban on assault weapons and high-capacity magazines. Biden was a key player in a 1994 law that banned the manufacturing of some semi-automatic firearms, but it was allowed to expire ten years later.

Congress has repeatedly failed to pass meaningful gun control legislation over recent decades and there appears to be little prospect of a breakthrough now despite a string of mass shootings in recent weeks.

A gun control bill would require 60 out of 100 votes to pass the US Senate, which seems impossible given strong Republican opposition to any measures to restrict access to firearms. 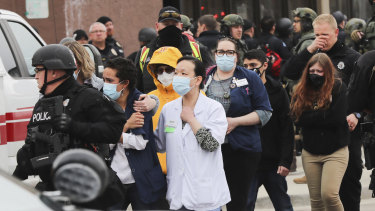 People are led out of a grocery store in Boulder, Colorado, after a shooting that killed 10 people. Credit:AP

“What happens in this committee after every mass shooting is Democrats propose taking guns away from law-abiding citizens because that is their political objective, but what they propose not only does it not reduce crime, it makes it worse,” Cruz said.

The mass shooting at a grocery store in Colorado followed the killing last week of eight people at spas in Georgia and the death of five people in a shooting spree in Missouri.

Colorado police announced on Wednesday (AEDT) that they had charged a 21-year-old man, Ahmad Al Aliwi Alissa, with 10 counts of murder in connection the shooting in Boulder.

“Not only did we lose 10 lives, but this is real horror and terror for all of us.”

The victims ranged in age from 20 to 65. Among those killed was 51-year old Eric Talley, an 11-year veteran of the Boulder police force and a father-of-seven.