Wesley College principal Nick Evans has condemned a TikTok video in which sexually degrading comments about girls are made by boys, some of them Wesley students.

The video, believed to have been shot earlier this year, shows an older male “interviewing” four boys in Melbourne about “the most f—ed up thing they have done”, to which two boys answer with highly explicit and derogatory comments involving girls.

Mr Evans said he was aware of the video circulating and called the comments “offensive and totally inappropriate”. He confirmed that several of the youths are Wesley students.

“Whilst this video was shot during school holidays and away from school campus, I was deeply disappointed by its content and the students involved will be appropriately dealt with,” Mr Evans said. “Recent events illustrate that the dimensions of this issue for Wesley College are far greater than we recognised.”

The Age has chosen not to publish the video.

The school was still reeling after The Age revealed on Tuesday that a group of Wesley boys had made misogynistic comments that had distressed bus passengers after Monday’s women’s March 4 Justice.

Education Minister James Merlino said on Wednesday that the comments, which were said to have distressed some passengers enough for them to immediately disembark, were disappointing, disgraceful and “just beggar belief”.

“I know that the school is deeply, deeply disappointed with the behaviour of some of their students, and they’ll take action.”

Mr Evans held an assembly at the school’s St Kilda Road campus on Wednesday to address the bus incident. He told the school he had struggled to find words to discuss the incident because he was angry “that women cannot walk down the street without the expectation of safety … that women still cannot go to work and work and not be sexually harassed … that one-quarter of Australian women are assaulted by their partner … [and that] last year 56 women died as a result of domestic violence”. 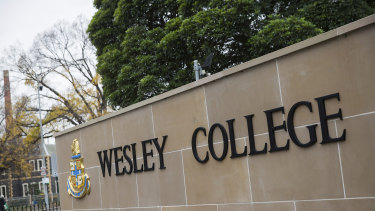 He said there were “people in this school saying words that cannot be unheard … Those who did [hear them] were rightfully appalled. They were appalled by the lack of humanity, the casual disregard for the lived experience of half the human race.” He spoke of the need to forgive.

Female students at Wesley told The Age they felt the speech did not go far enough to name and address sexism and sexual harassment some experienced from some fellow students.

“I wouldn’t expect him to fully understand how it feels coming to school every day when we have this culture that is apparent at Wesley and a lot of private schools,” said one girl in senior school who did not wish to be named.

“The issue of rape culture, sexual assault and discrimination have been brought up many times but it’s kept quite hush hush, not a lot is done about it unless the media is involved. I have said if Wesley didn’t do something about, it something bad would occur and something bad has occurred.”

Mr Evans said it was clear that programs and the curriculum (on issues such as consent and respectful relationships) had “not been as effective as they need to be, nor have they been received as we expected”.

He said the school had completed an audit of its programs and was gathering “baseline data to examine the effectiveness of our programs” and would “enter a phase of deep listening”.

It was imperative the school better understood the experiences of students, he said, and particularly female students, the issues they face and what they think can be done better.

Student forums would be established to open conversations in a safe environment to “help us understand the scale and scope of the issues at hand”. External experts were being commissioned to undertake focus groups and surveys with students.