JD Wetherspoon revealed today it had registered a heavy drop in sales and a £52.8million pre-tax loss in its last six-month period as pub chains were devastated by the coronavirus pandemic.

Revenue at the Watford-based company dropped by nearly 54 per cent to £431million in the half year to the end of January, even as pubs were allowed to reopen, albeit under restrictions, for part of that time.

Government plans means pubs with outdoor serving areas – including 394 Wetherspoon sites – will be allowed to reopen on April 12. This will progress to table-only service indoors on May 17, and a full reopening on June 21.

The chain has released photographs of ten of its socially-distanced beer gardens across England in advance of them opening next month, including pubs in London, Sheffield, Leeds, Windsor and King’s Lynn.

The pubs will be open from 9am to 9pm from Sunday to Thursday, and 9am to 10pm on Friday and Saturday, although some have restrictions on closing times and in those cases will close earlier. 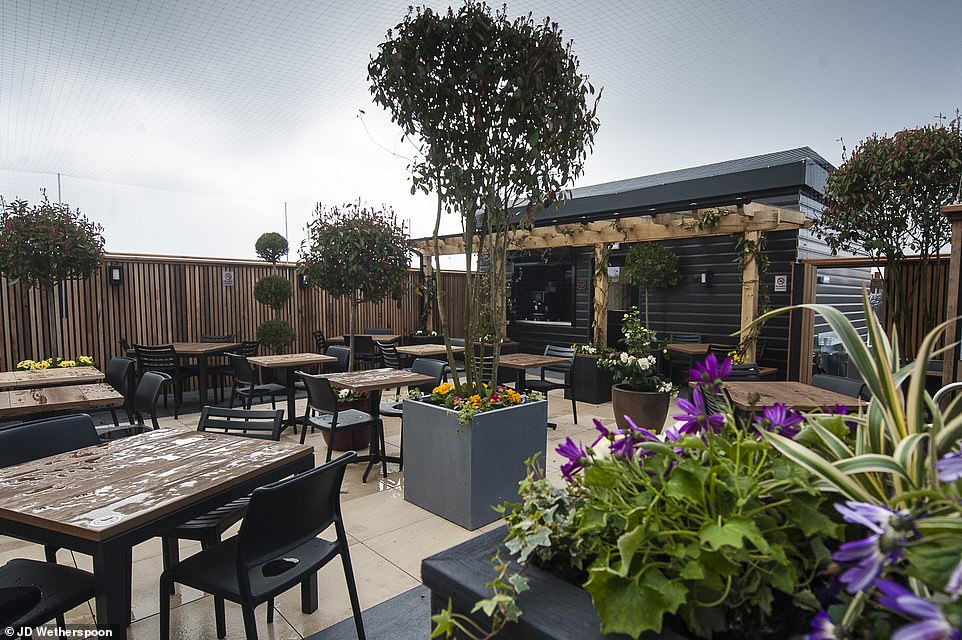 The John Russell Fox in Andover, Hampshire, will be among the 394 Wetherspoon pubs to reopen beer gardens on April 12 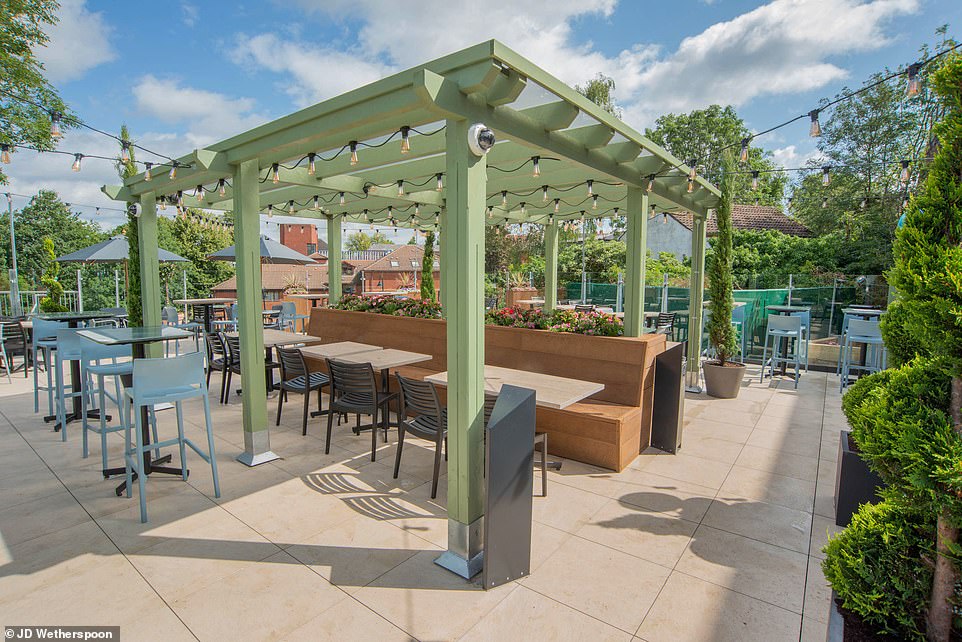 The Royal Enfield in Redditch, Worcestershire, is also among the pubs that has a beer garden and can therefore reopen 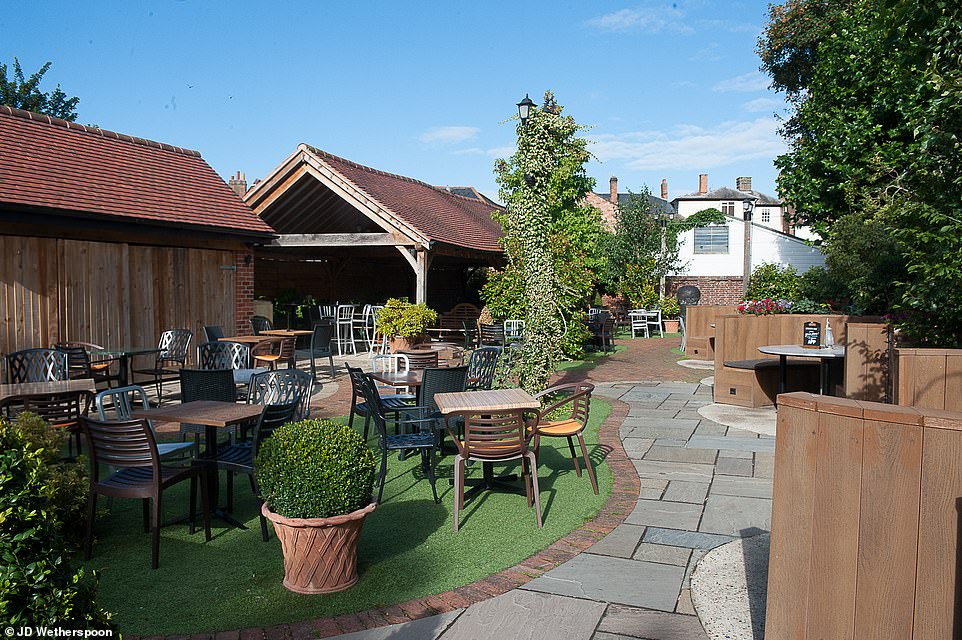 The Angel Vaults Inn pub in Hitchin, Hertfordshire, has an outdoor seating area and can therefore reopen on April 12 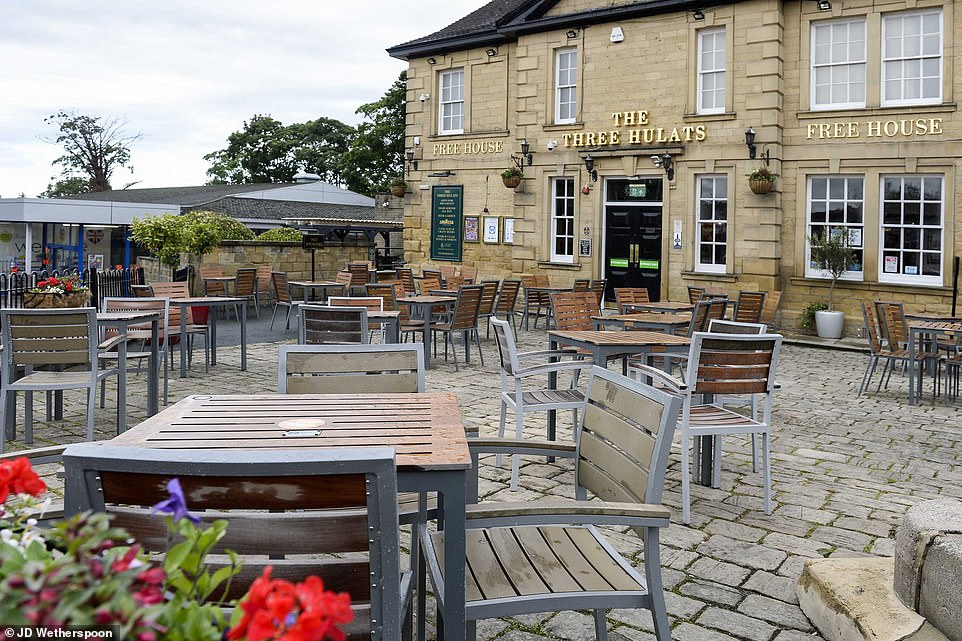 The Three Hulats in Chapel Allerton, Leeds, has an outdoor seating area that will reopen for customers next month 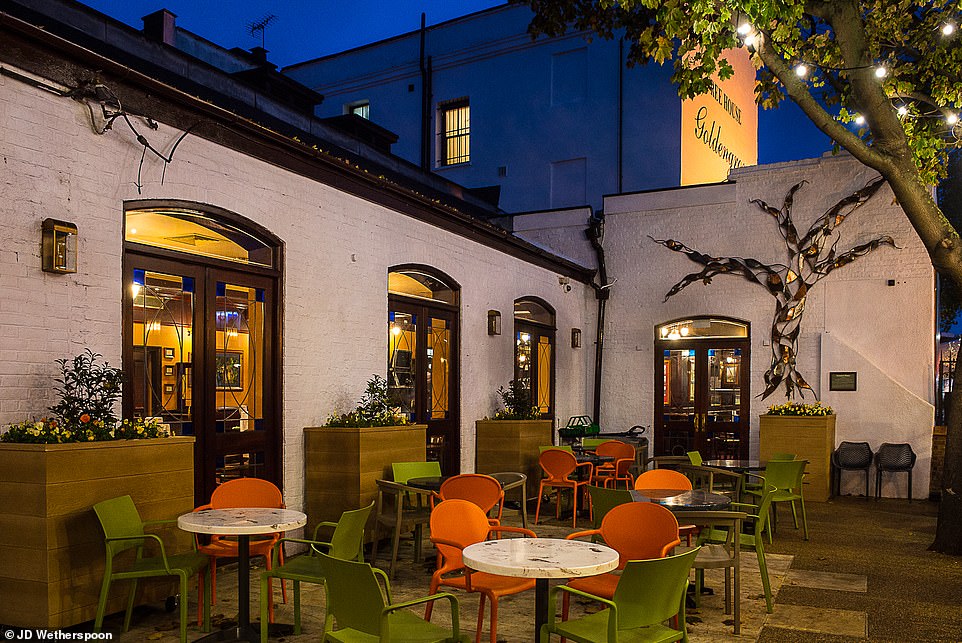 The Goldengrove pub in Stratford, East London, has an outdoor seating area that will be back in use from April 12

The locations are set to offer a slightly reduced menu compared to normal, to include breakfast, burgers, pizza, deli deals and British classics such as fish and chips. Food will be available from 9am to 8pm seven days a week.

Customers will be able to order and pay through the Wetherspoon app, but staff will also be able to take orders and payment at the table from those who do not have the app. The pubs will not be operating a booking system.

Vaccine passports could soon be piloted in pubs

Vaccine passports could soon be piloted in English pubs to check whether they can help speed up the lifting of social restrictions.

A tech company is understood to be in talks with the government to carry out trials in pubs in Chester as soon as next month. Customers would have to show an app to prove they had had a vaccine or a negative Covid test before being allowed to have a drink indoors.

The firm, Match Fit Pass, said it has discussed the idea with officials in government and is waiting for the green light to be able to carry out the pilot from April 12.

Permission is needed because, according to Boris Johnson’s roadmap, only outdoor opening for pubs is allowed on that date. Football clubs and music venues are also said to be interested in taking part in the trials, the company said.

Michael Gove, the Chancellor of the Duchy of Lancaster, is heading up an official review into how vaccine passports could help venues such as pubs to scrap social distancing requirements more quickly.

His review will also consider potential ethical problems such as whether it is right to bar people from pubs if they have decided against having the vaccine.

Michael Dodd, the chief executive of Match Fit Pass, said: ‘We’ve already got six venues in Chester lined up and eager to beta test the Match Fit Pass solution. We’re just waiting on the green light from local authorities and the government and then we can start to roll this out nationally and internationally and get our global economy moving again.’

To use the vaccine passport, customers will have to upload a photograph of their face and their passport or driving licence. This information will be encrypted within a biometrically secure QR code.

Information on Covid-19 testing and vaccination can then be shared on the app. The venue will scan the code and take a photo of the customer’s face. If this matches the information in the QR code – and it shows the person has had a jab or a negative test – they will be permitted entry to the venue.

Visitors will be able to enter the pub to gain access to the outside area and also to use the toilet. Test and trace systems will be in operation and hand sanitisers will be available.

It comes as the firm swung to a £52.8million pre-tax loss, from a £51.6million profit a year earlier. Wetherspoon pubs, along with their rivals, were allowed to reopen again after months of lockdown last summer.

It meant that from July 2020, around 50million customer visits were clocked in across the pub giant’s pubs. The firm said it had notched up charges of £7.5million as it spent to ensure its pubs were safer, among other things.

Screens were set up between tables to improve social distancing during the months that the pubs were open.

Yet a second national lockdown in November, and a reopening under tiered systems in December, only for doors to once again be slammed shut at the start of January, caused another painful period for the hospitality sector.

To help get through the crisis, Wetherspoon has tapped into the Government’s furlough scheme, claiming more than £97million in the half year.

It also took a loan from the Coronavirus Large Business Interruption Loan Scheme in August last year, and has agreed a second CBILS loan of nearly £52million this month, Wetherspoon said.

Shares in the business dropped 1.6 per cent this morning as markets opened, and despite recovering since lows a year ago, they are still around 13 per cent lower than before the Covid-19 sell-off that hit markets in February 2020.

Its chairman Tim Martin, who has criticised the Government’s handling of the pandemic, said the future of the industry depended on a ‘consistent set of sensible policies’ and the ending of lockdowns and tier systems.

The company, which posted its first annual loss since 1984 in fiscal year 2020, has had to cut hundreds of jobs and ask investors for money twice, to get through the pandemic.

Mr Martin said the curbs, including curfews, ‘substantial meals’ with drinks, and masks for bathroom visits, had ‘no real basis in common sense or science’, reiterating his stance that the Government be more considerate towards the industry.

On St Patrick’s Day alone, pubs lost out on 14 million sales of pints, while £8.2billion in trade value was wiped out from the sector just in beer sales since the first round of lockdowns last year, the British Beer and Pub Association estimated this week.

Susannah Streeter, senior investment and markets analyst at Hargreaves Lansdown, said: ‘The pandemic has taken a sledgehammer to Wetherspoon’s business model, which is focused on pulling in high volumes of punters while keeping prices low. 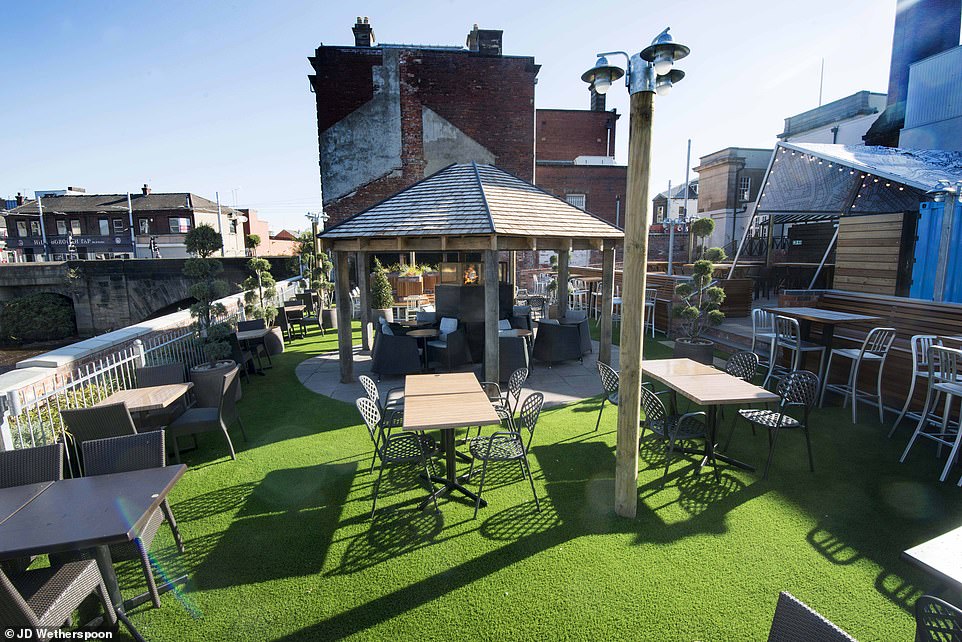 The Rawson Spring in Hillsborough, Sheffield, will reopen its outdoor seating area for customers from April 12 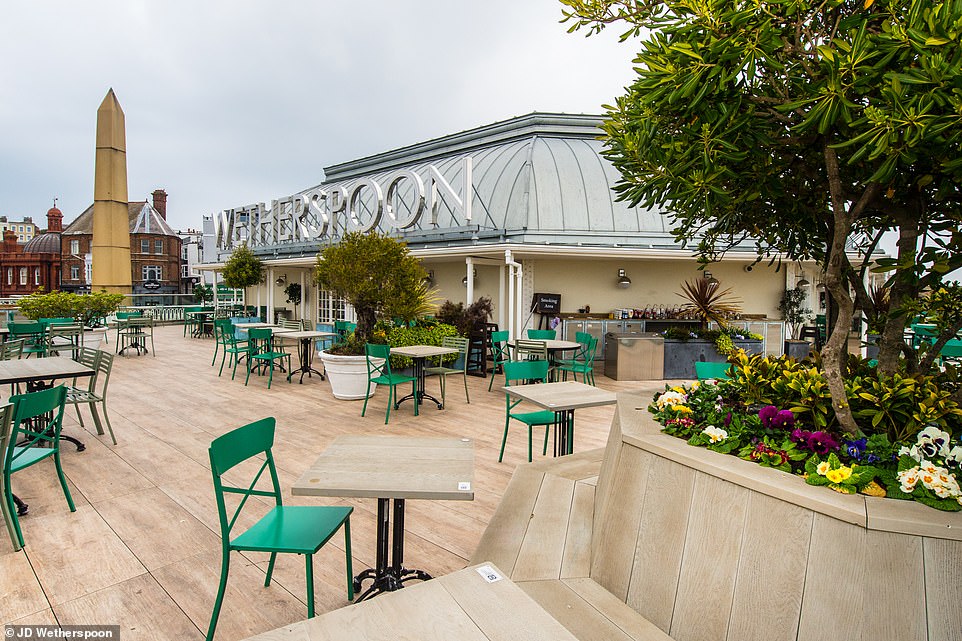 The Royal Victoria Pavilion in Ramsgate, Kent, which is Britain’s biggest pub, has a large outdoor area overlooking the beach 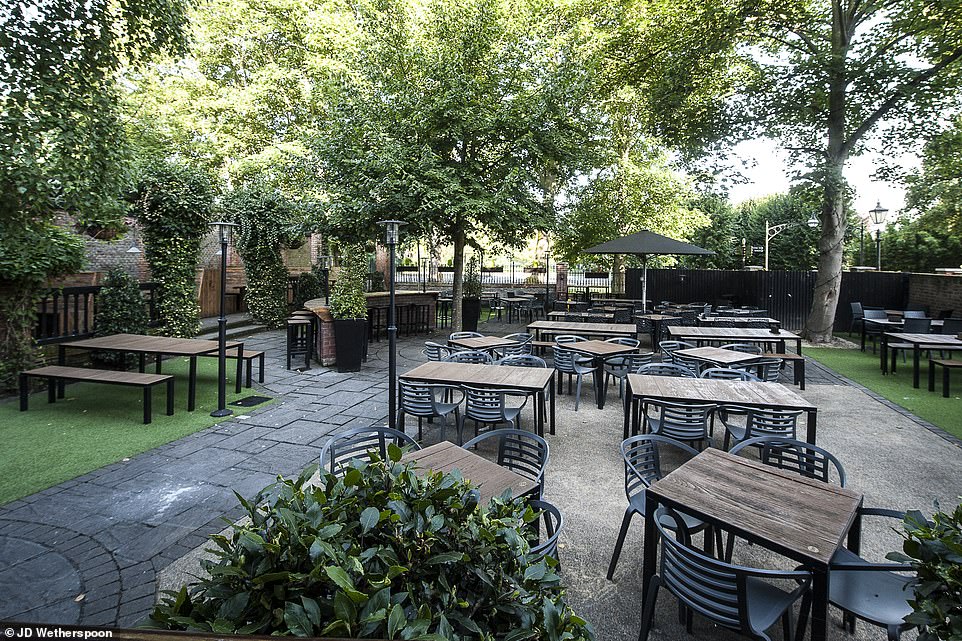 The King and Castle in Windsor, Berkshire, which overlooks Windsor Castle, will also open its outdoor area next month 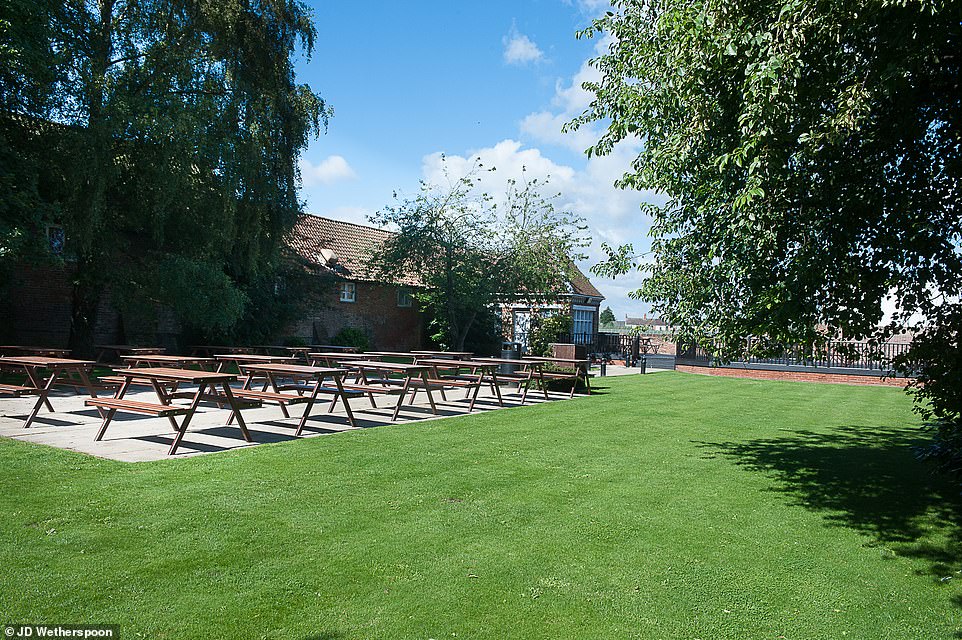 The Globe Hotel in King’s Lynn, Norfolk, has a large outdoor space which will reopen for customers on April 12 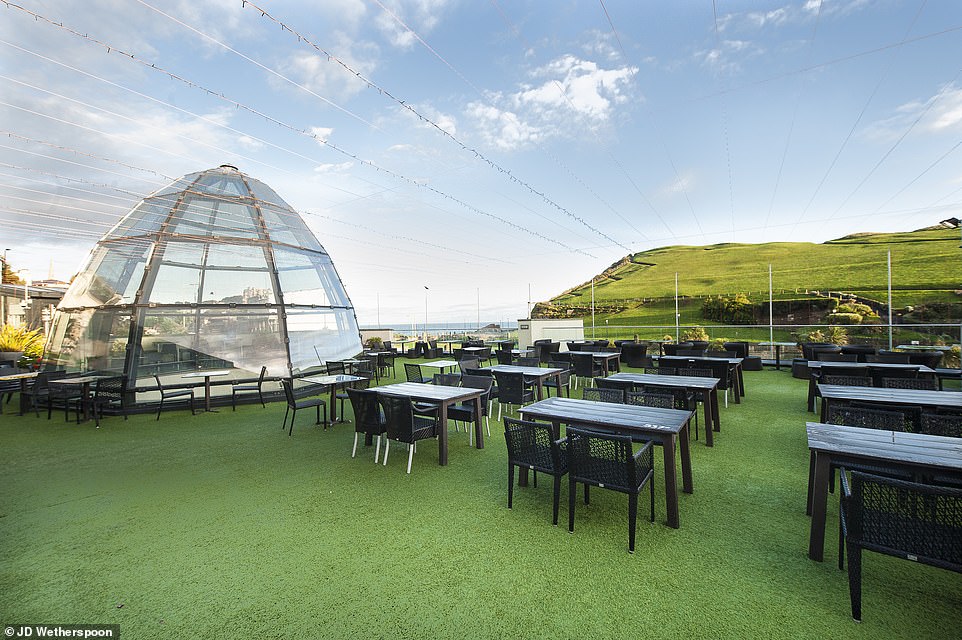 ‘The stop start nature of the business during the crisis has seen a yo-yo effect to some extent, but overall the picture was of a sharp decline.

‘Like for like sales plunged by 53.9 per cent as lockdowns and strict social distancing measures turned packed venues into empty caverns. Given the pre-tax loss of £61.4million, it comes as no surprise the interim dividend has been scrapped.’

She added: ‘Indoor drinking and eating won’t be able to resume until May 17 at the earliest, and the company is even questioning the certainty of that timeline. It is speculating that despite the successful roll out of vaccines, there could be more knee jerk reactions in government policy to the latest news updates.

‘The extension of the VAT cut to 5 per cent will provide some short term relief and the company says if it’s made permanent, it would be able to keep lower prices indefinitely which should help lure customers back through the doors when they finally do open.’ 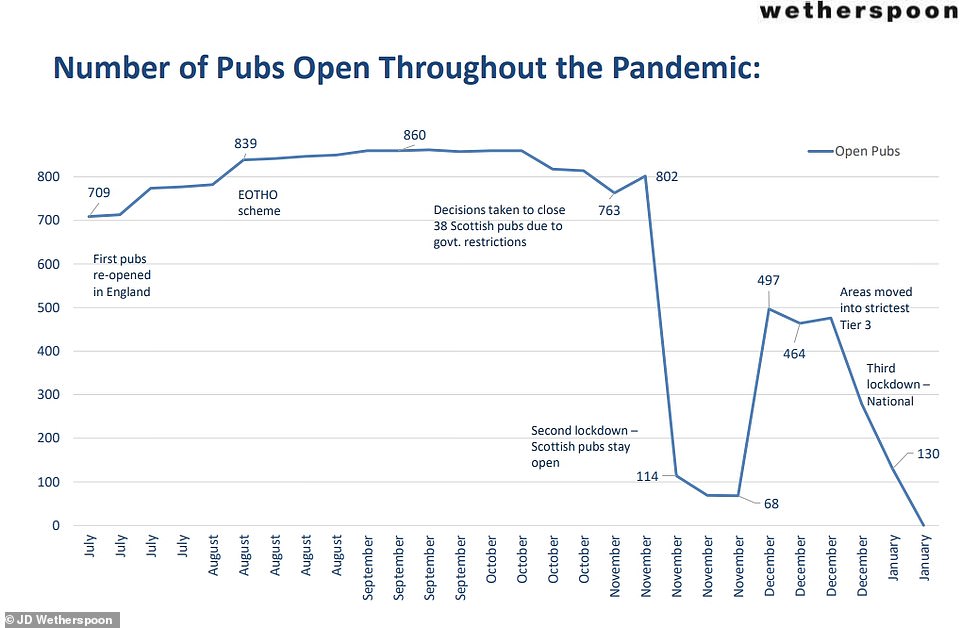 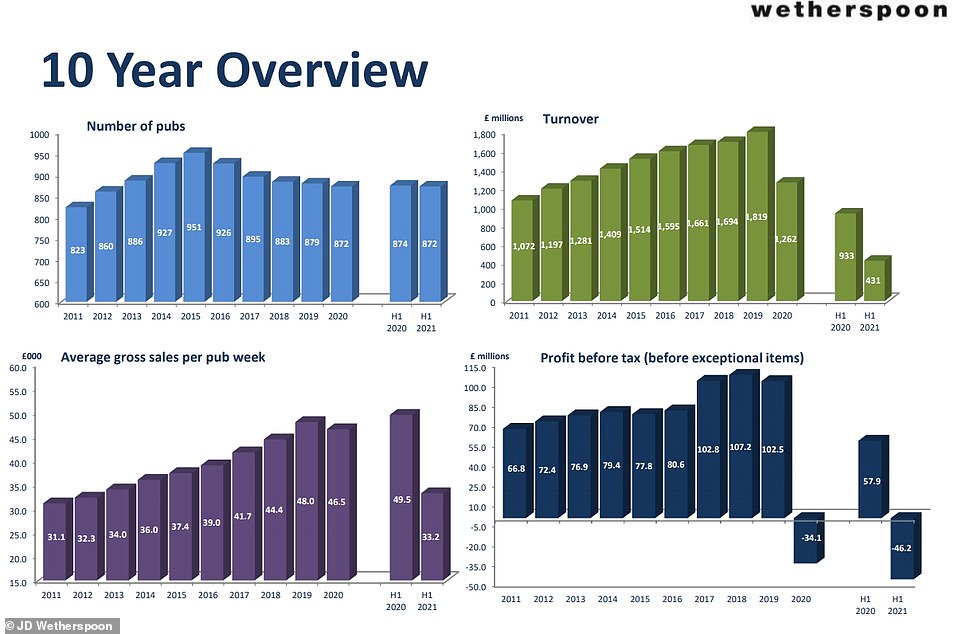 The past year has been devastating for the pub industry, with Wetherspoon suffering big falls in the likes of sales and turnover 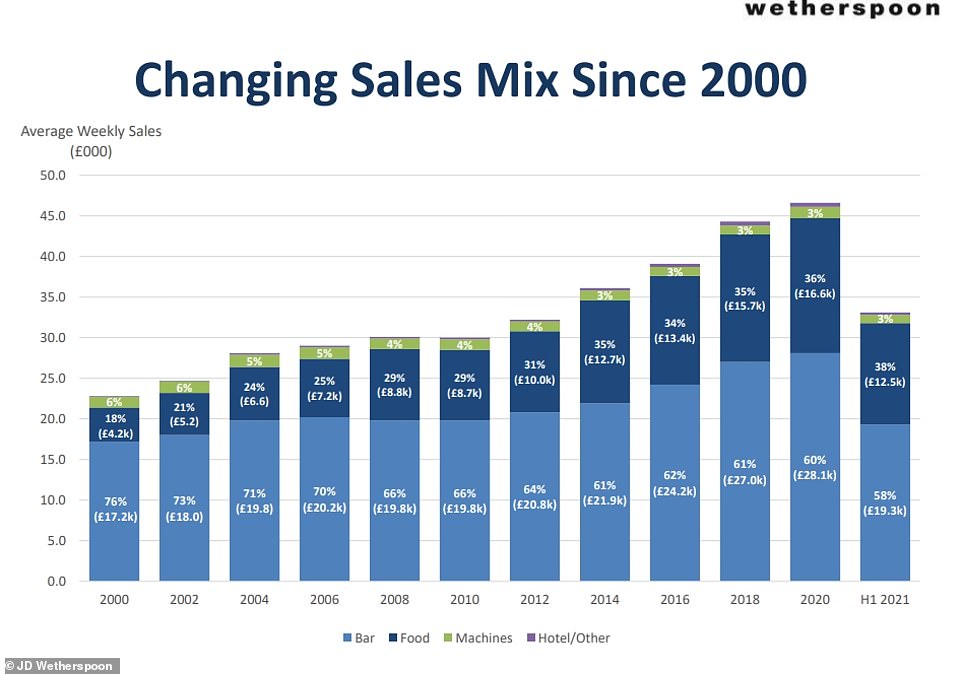 Wetherspoon’s business model has changed over the past 20 years, now relying significantly more on food than it used to 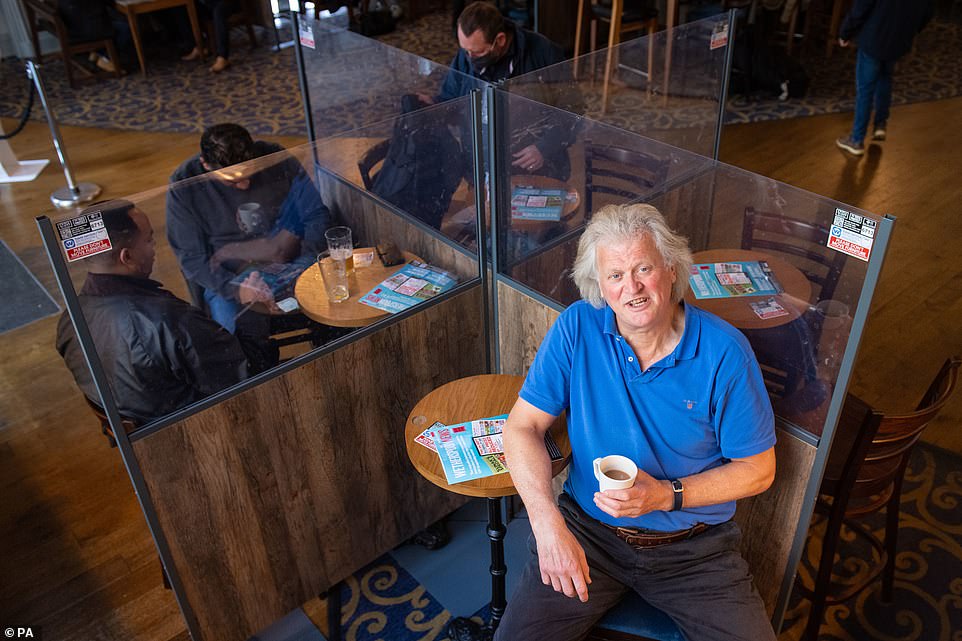 Vaccine passports could soon be piloted in English pubs to check whether they can help speed up the lifting of social restrictions.

A tech company is understood to be in talks with the government to carry out trials in pubs in Chester as soon as next month.

Customers would have to show an app to prove they had had a vaccine or a negative Covid test before being allowed to have a drink indoors.

The firm, Match Fit Pass, said it has discussed the idea with officials in government and is waiting for the green light to be able to carry out the pilot from April 12.

Which Wetherspoon pubs are reopening next month?

The Wetherspoon pubs below will be opening their outdoor areas on April 12, 2021:

The Back of Beyond, Reading

The King and Castle, Windsor

The Moon Under Water, Milton Keynes

The Bull and Stirrup Hotel, Chester

The Chief Justice of the Common Pleas, Keswick

The Pillar of Rock, Chesterfield

The Talk of the Town, Paignton

The Moon in the Square, Bournemouth

The Prior John, Bridlington

The Admiral of the Humber, Kingston Upon Hull

The Moon Under Water, Cheltenham

The Moon and Cross, Waltham Cross

The Moon Under Water, Watford

The Man in the Moon, Newport

The Belle and Lion, Sheerness

The Shoulder of Mutton, Ashby-de-la-Zouch

The Fox on the Hill, Camberwell

The Moon Under Water, Enfield

The Moon and Sixpence, Hatch End

The Great Spoon of Ilford, Ilford

The Half Moon, Mile End

The Moon Under Water, Norbury

The Sovereign of the Seas, Petts Wood

The Moon and Stars, Romford

The Moon on the Hill, Sutton

Castle in the Air, Manchester

The Queen of Iceni, Norwich

The Earl of Dalkeith, Kettering

The Duke of Wellington, Minehead

The Lord Burton, Burton upon Trent

The Half Moon Inn, Billingham

The Five Swans, Newcastle upon Tyne

The Mile Castle, Newcastle upon Tyne

The Quayside, Newcastle upon Tyne

The Figure of Eight, Birmingham

The Court of Requests, Oldbury

The Bottle of Sack, Sutton Coldfield