Home » World News » Why were Harry and Meghan in the second row for Queen's funeral?

Why were Harry and Meghan in the second row for Queen's funeral?

Harry and Meghan were sat in the second row for the Queen’s funeral at Westminster Abbey because her grandchildren were placed in ‘approximate age order’, it was reported today.

The Duke and Duchess of Sussex, 38 and 41, sat next to Princess Beatrice and her husband, Edoardo Mapelli Mozzi, at the abbey. Next to them were Lady Louise Windsor and Viscount Severn, the children of the Earl and Countess of Wessex.

Across the aisle on the front row, the heir to the throne Prince William, 40, sat with his wife, Catherine, and their children, Prince George and Princess Charlotte. Alongside them were Peter Phillips, 44, and Zara Tindall, 41, Princess Anne’s two children.

King Charles III and Queen Consort Camilla were in the front row with his three siblings and spouses. Despite some suggestions the Sussexes had been slighted, this meant Harry was behind his father and closer to the coffin. 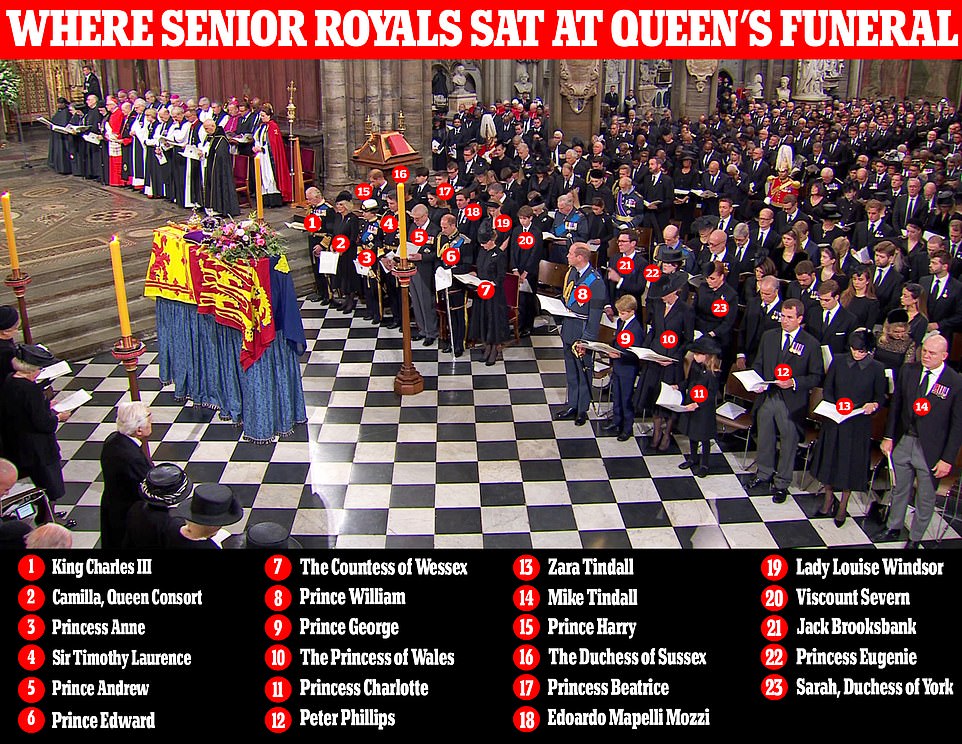 Last night, a palace source was quoted by The Times as saying that the Queen’s grandchildren were placed in approximate age order, with efforts taken not to split families up.

Meghan’s spot behind Tim Laurence, Princess Anne’s husband and one of the tallest members of the Royal Family, meant she was sometimes hidden from view. A large church candle also stood between her and the TV cameras, while her wide-brimmed hat made it even more difficult for fans to see her.

The duchess may have been happy to keep a low profile after a number of interviews in recent months in which she has been highly critical of the Royal Family.

Despite the criticisms, she has praised the queen and revealed in an interview with US chat show host Oprah Winfrey last year that the monarch had always shown her kindness.

‘The queen has always been wonderful to me,’ she said. ‘I just really loved being in her company… she’s always been warm and inviting and really welcoming.’

She may have been reflecting on that yesterday when she was seen to wipe away a tear as the British monarch’s coffin was taken from the Abbey.

The Sussexes stayed in the UK last night after reuniting with the royals to mourn the Queen but are expected to leave for California ‘as soon as they can’ after not seeing Archie and Lilibet for nearly three weeks.

They arrived in Britain on September 3 for the first time since the Queen’s Platinum Jubilee in June. They expected to stay only briefly but with the news Her Majesty was ill Prince Harry cancelled his appearance at the WellChild Awards in London and rushed to Balmoral.

The Sussexes were placed on the second row at the Abbey, and Harry was prevented from wearing his military uniform due to no longer being a senior royal 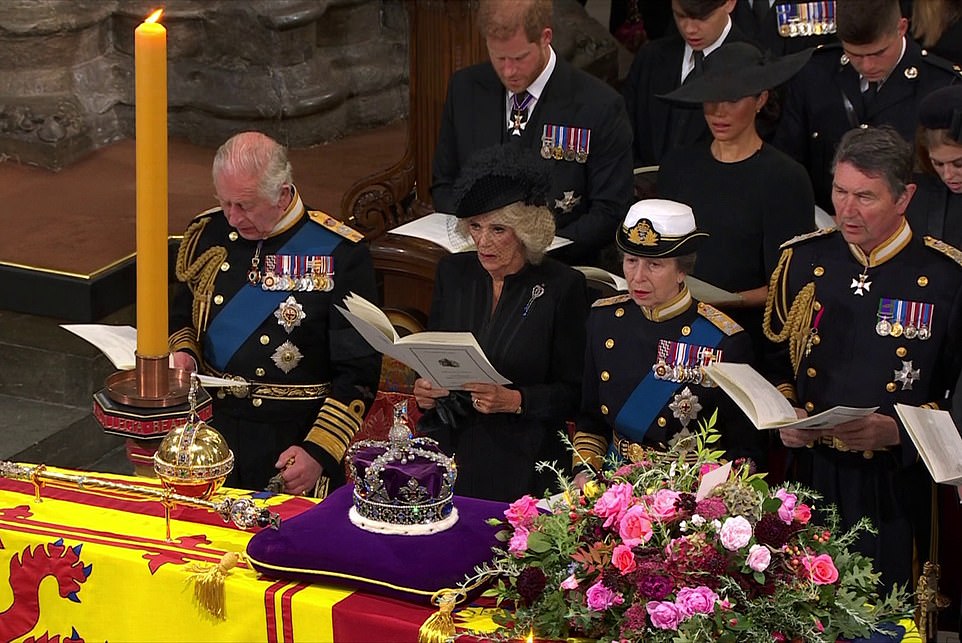 Meghan and Harry are sitting on the second row, directly behind King Charles III, the Queen Consort and Princess Anne

Although the Duchess of Sussex did not join him in Scotland, she was by his side for a series of official events over the 10-day period of mourning.

The Sussexes were reported at the weekend to be planning to fly back to the US as soon as they could, although informed sources last night told The Times that the couple were still in the UK.

Harry was seen puffing his cheeks yesterday evening as he got into a car with Meghan following an emotional day which saw the Queen finally laid to rest with her beloved husband Prince Philip.

The Duke of Sussex and other royals, including Charles and Camilla, were pictured leaving St George’s Chapel in Windsor yesterday afternoon after a moving committal service for the late monarch.

In what was the longest of days for the royal family, relatives of the Queen went back to Windsor Castle for some rest before returning to St George’s Chapel for a private burial service later that night.

There they witnessed Her Majesty being buried with the Duke of Edinburgh in a service conducted by the Dean of Windsor in the The King George VI Memorial Chapel.

It was one of the only parts of yesterday that was not televised, with billions of people around the world thought to have seen some part of the processions and services in honour of Her Majesty.

At the start of the day members of the Royal Family – including Prince George, nine, and Princess Charlotte, seven, and thousands of world leaders and foreign dignitaries congregated at Westminster Abbey for the late monarch’s funeral service.

Harry was visibly emotional during the procession and inside the church, as was Meghan, who was seen wiping away tears at the ceremony. 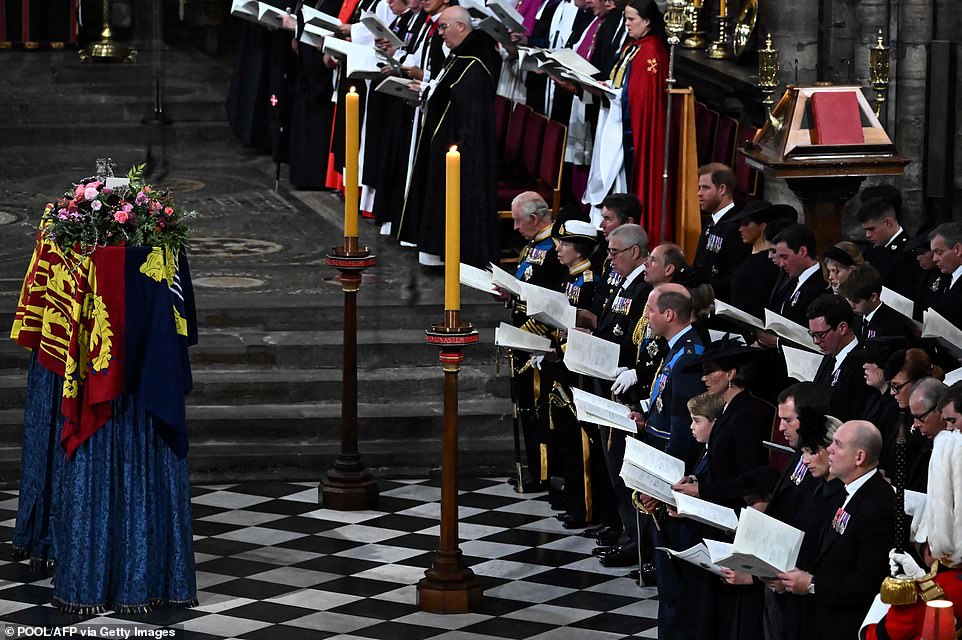 Harry was prevented from wearing his military uniform or saluting as the Queen’s coffin passed the Cenotaph during the procession before the service due to no longer being a senior royal.

The week saw several rare displays of public unity between the royal family and Harry and Meghan.

On September 10, the couple were invited to join the Prince and Princess of Wales to inspect floral tributes outside Windsor Castle, while yesterday William was seen appearing to direct Harry and Meghan to their seats during the later service at St George’s Chapel.

But onlookers noted the lack of warmth or eye contact between the two brothers.

Yesterday, Harry was seen walking solemnly on the grass outside St George’s Chapel in Windsor ahead of the Queen’s committal service, and speaking with his aunt Princess Anne and her husband Vice Admiral Sir Tim Laurence.

At the service Her Majesty was laid to rest with Prince Philip, along with her husband, father, mother and sister as her 70-year reign came to an end with the removal of her crown, orb and sceptre from her coffin.

Her eldest son and the new monarch, King Charles III, looked deeply moved as his mother’s remains descended on a day where he appeared tearful on a number of occasions as he said goodbye to his mother, the 12th British monarch to be buried at Windsor.

A smaller, more private burial service took place last night, with the Queen’s family finally given the chance to pay their respects and mourn her passing away from the public’s gaze.