Widow is locked in planning row with neighbours over £1m house

Widow is locked in planning row with neighbours over her and her late husband’s £1m house that featured on BBC’s Homes Under the Hammer after it was built 4ft too long, in the wrong place and swimming pool was installed without permission

A grieving widow whose spectacular £1 million house featured on Homes Under the Hammer is at the centre of a planning row after it emerged she and her late husband built it bigger than planned and in the wrong direction.

Angela Vickers and her late husband Ian bought a four acre plot and submitted plans to demolish an old bungalow in Hampshire and replace it with an oak-framed, three bedroom home five years ago.

The couple were ordered to demolish the home after it was found to be in breach of its planning application, including being built in the wrong place and having an unplanned swimming pool. The decision was later overturned but Angela remains locked in a dispute with her unhappy neighbours.

The Homes Under The Hammer episode showed Mr Vickers building the oak-framed home himself, complete with a ‘glorious’ swimming pool to the south, a patio to the north, a garage with an office above it, a hen house and a garden chalet. 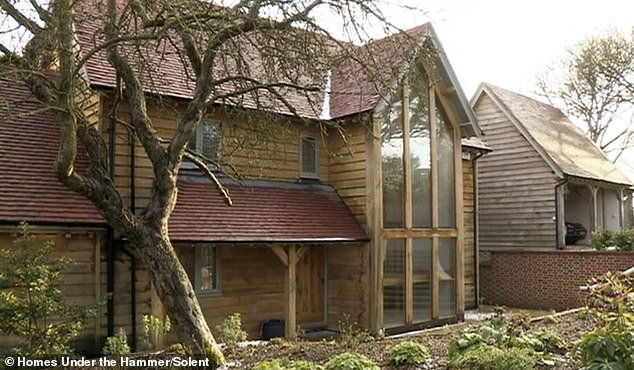 Angela Vickers and her late husband Ian spent £250,000 building their dream home but did not have proper planning permission 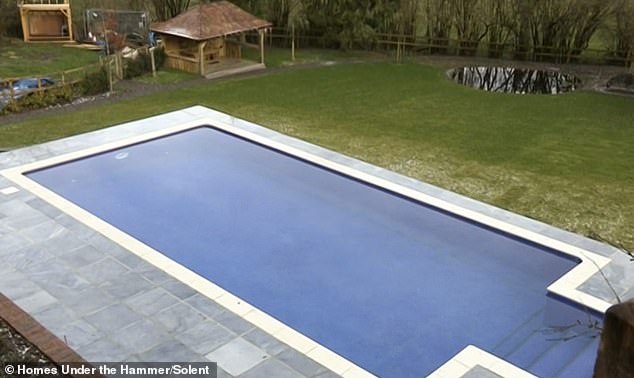 Mr Vickers built the oak-framed home himself, complete with a ‘glorious’ swimming pool to the south, which did not have permission to be built

However, the finished house – located in a conservation area in Hampshire’s New Forest – has enraged neighbours after it was built 1.2 metres longer than agreed, pointed in a different direction and was in a different location to the original plans.

Neither the swimming pool nor extra outbuildings the couple built had permission either, it has emerged.

The Vickers initially applied to vary the planning permission retrospectively to include the swimming pool and the other changes, but these were denied and they were told to tear it down.

This was appealed by the Vickers, and in an attempt to resolve the situation, another application was submitted and approved to reduce the building’s size in July this year – after Mr Vickers had died – instead of demolition.

But the Vickers’ neighbours are – currently challenging this approval and have called for a judicial review of the planning process.

Mr and Mrs Vickers bought the plot and one-storey house in 2017 in Godshill Wood, New Forest, Hampshire, after the previous owners received consent to replace the old bungalow with a two-storey property.

On the Homes Under the Hammer show, presenter Lucy Alexander said of the old house: ‘It looks more like a glorified shed or a rundown holiday chalet.’

She warned that getting planning permission for their home was going to prove tricky. 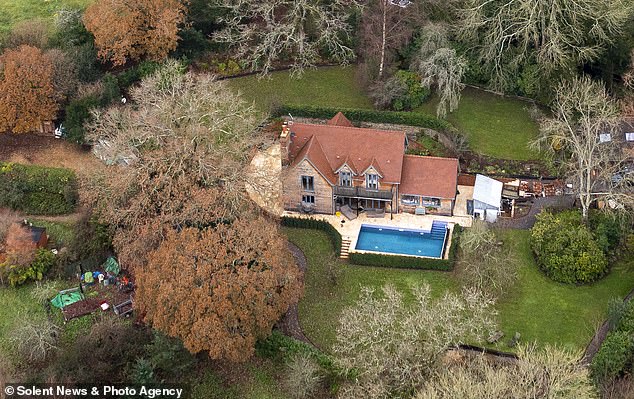 Following Ian’s death, Angela remains locked in a dispute with her neighbours over the £1 million home 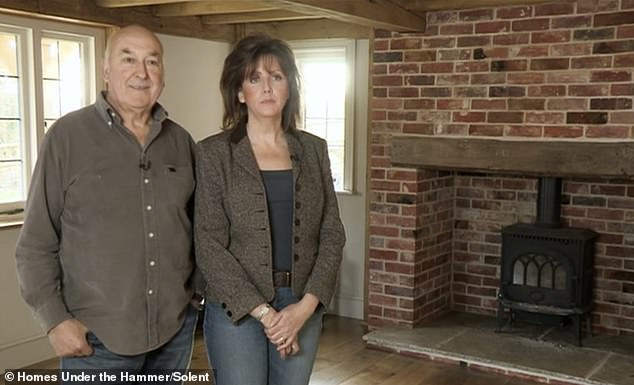 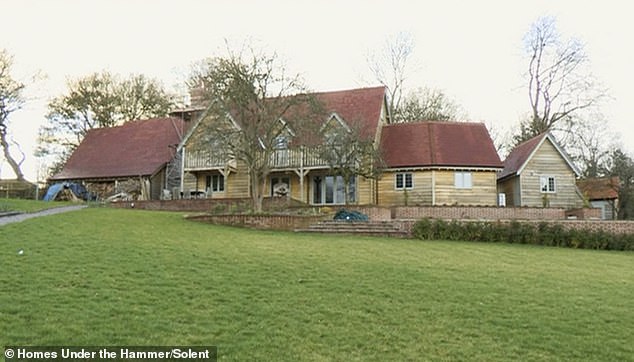 But Mrs Vickers boasted of how her husband was going to win over the local authority. ‘I’m going to send Ian in and he’s going to charm them,’ she said.

When the show revisited the completed project – in which a local estate agent valued the new home at £1 million – Ms Alexander admired the new building and was particularly impressed by the ‘amazing’ pool.

Mr Vickers boasted on the show: ‘There are about 20 oak trees which have gone into this house – all the oak framing and stuff, all the kitchen, doors inside and out, they’ve all been made by us.

‘A lot of job satisfaction in the whole place, really.’

However, it didn’t take long for local residents to kick up a fuss.

After complaints were submitted to the local planning authority, an enforcement notice was issued for the building to be demolished.

Mrs Vickers, 59, who was left widowed after her husband died aged 75, tried to resolve the situation and managed to persuade them to let her reduce the building’s size rather than knock it down.

But the Vickers’ neighbours are determined not to let that be the end of the matter.

Mark Atwill, a close neighbour claims he is directly affected by the light pollution and overlooking windows.

He said: ‘It wasn’t done considerately. It’s in the wrong place, and it’s the wrong size. All this extra stuff was put in, like the swimming pool and outbuildings. 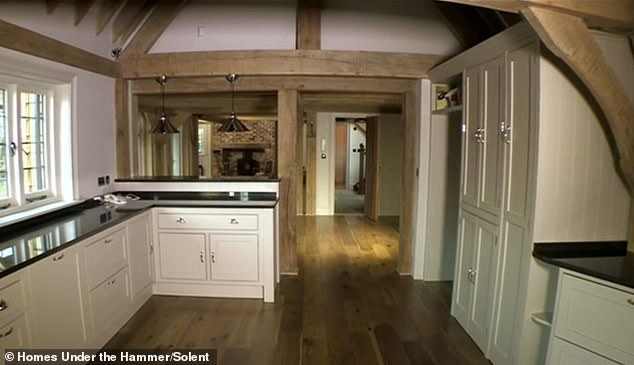 After complaints were submitted to the local planning authority, an enforcement notice was issued for the building to be demolished, but it has since been overturned 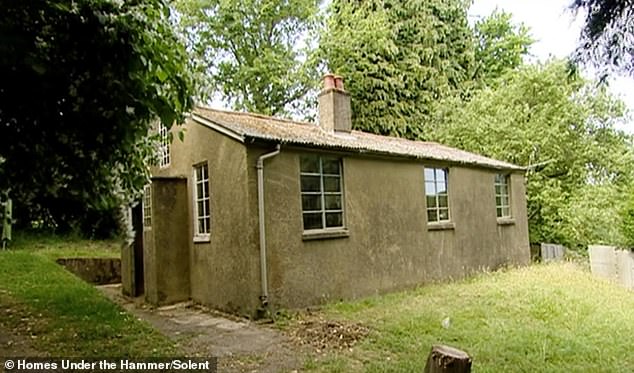 ‘The house is chunky. I had dumpster trucks driving up next to my house when it was being built. Nobody was told about it until the consultation period was closed. It just seems to be so odd.

‘He’s a conman who’s not around for the backlash. I don’t want to speak ill of the dead, but I can’t think of another way to put it.’

A male neighbour, who wished to remain anonymous, said: ‘It’s not personal. The house looks nice, but it shouldn’t be there.

‘It was like living near a warzone when it was being built.’

Raymond Clem, who lives on the same road, wrote to the New Forest National Park Planning Authority [NPA] to object to Mrs Vickers’ plan to reduce the house in size.

‘As an immediate neighbour of this application site, I am concerned that I did not receive any notification of it from the planning department,’ he said.

‘Since 2016, this site has been mired in controversy, and a myriad of plans submitted have confused the matter.’

Mrs Christina Folliard, another neighbour, wrote : ‘I am aware there is an ongoing judicial review into the ridiculous previous approval in which the authority u-turned their positions and ignored all of the continuing harm this development is causing.

‘It’s encouraging others with similar intent to build whatever they want as the authority clearly has no ability or willingness to prevent or remedy such action, especially given this is not the first time these applicants have behaved in such as way.’

But one local, Mr Fletcher, said: ‘A sensible solution requiring remedial action was reached earlier this year. Let it stand. The more change required at Paysanne, the greater the disruption to my household.

‘The enforcement order that required demolition of the new property was wholly disproportionate to any harm caused.

‘All that Mr Vickers had done was build a house and a good one at that. There was never any subterfuge, the process was open, and he invited all comers to come and see it.’