The last time China lit the Olympic flame, in 2008, the Chinese government promised they would improve human rights.

By the end of those Games, Amnesty International was scathing in its criticism over the lack of action, accusing the authorities of prioritising image over substance as it continued to persecute and punish activists and journalists during the two-week event. 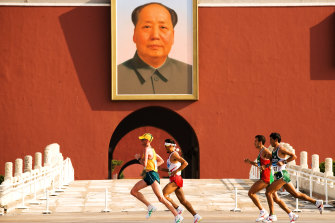 Today, as China prepares to host the 2022 Winter Olympics, the country, under the rule of Xi Jinping, is more repressive than ever. The authorities have created a dystopian hellscape on a staggering scale in the Xinjiang Uighur Autonomous Region.

Here, they are committing crimes against humanity; arbitrarily detaining hundreds of thousands of Muslim men and women in so-called “transformation through education” centres, where they face systematic torture and ill-treatment.

The government is also exercising ever-tighter control over what Chinese citizens can see of the world and what they can say about it. It runs an extreme internet censorship regime, blocking thousands of websites and social media services – even Amnesty deemed it no longer safe to run an office out of Hong Kong. 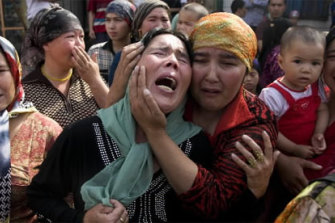 Uigher women grieve for men who they claim were taken away by the Chinese authorities after a protest in Urumqi.Credit:AP

In just the last month, the eyes of the media and sporting world have been on Peng Shuai, the Chinese tennis champion, who, after alleging sexual assault by retired vice premier Zhang Gaoli on November 2, suddenly disappeared before reappearing with a statement saying the allegations were “not true” and “everything is fine”.

China has a history of releasing forced or fabricated “statements” on behalf of those detained for speaking out. The Women’s Tennis Association has responded strongly, suspending all competitions in China, as the government’s response failed to “alleviate or address the WTA’s concern about her wellbeing and ability to communicate without censorship or coercion”.

In contrast to the WTA, the International Olympic Committee has publicly failed to question the “statement”. This approach by the IOC raises questions about the links between the upcoming Winter Olympics – a lucrative event – and their silence.

Now the United States has stepped in and announced a diplomatic boycott of the Winter Games in protest at China’s human rights track record. Australia may follow suit. Athletes will be encouraged to attend and compete in the games, but there will be a notable lack of political VIPs.

While Amnesty does not campaign for boycotts, with the world looking on, the Winter Olympics are that rare opportunity to apply direct and meaningful pressure on China to respect human rights, release those held arbitrarily and relax its censorship laws.

Sport is increasingly being used as a tool to whitewash, or “sportswash”, many countries’ reputations – the glitz and glamour of the opening ceremonies and the prowess of athletes and players, deflecting from deplorable human rights abuses.

Since it was awarded the 2022 FIFA World Cup, Qatar has faced scrutiny over its record on migrant workers’ rights. Millions of migrant workers in Qatar are responsible for building the stadiums, working in hotels and restaurants, and essentially making the World Cup possible.

As the World Cup organiser, FIFA, like the IOC, has a responsibility to ensure human rights are respected in the context of preparing for and carrying out the tournament. Following pressure from FIFA, alongside sustained campaigns by players, Qatar has introduced a series of reforms, including a minimum wage, regulating working hours, and changes to the kafala system – a system that binds workers to their employers, and leaves them vulnerable to significant abuses.

These reforms are the first in the Gulf region, where migrant workers face horrific abuses, and they evidence the ability of sports to promote respect for human rights. There is still a long way to go, and Qatar needs to properly implement these reforms, but they have the potential to make a real difference to millions of people.

Sport presents an opportunity to pressure states to stop abusing human rights. It can make a real difference to the people who suffer those abuses; whether they’re tennis stars like Peng Shuai, dissidents in Beijing, Uighurs in Xinjiang, or migrant workers in Qatar.