New Zealand is seeking the extradition of a woman from South Korea over the murder of two children whose bodies were found in abandoned suitcases last month.

New Zealand police announced on Thursday that a 42-year-old woman had been arrested on a Korean warrant issued on request from Auckland.

“NZ Police have applied to have her extradited back to New Zealand to face the charges and have requested she remain in custody whilst awaiting the completion of the extradition process,” Detective Inspector Tofilau Fa’amanuia Vaaelua said. 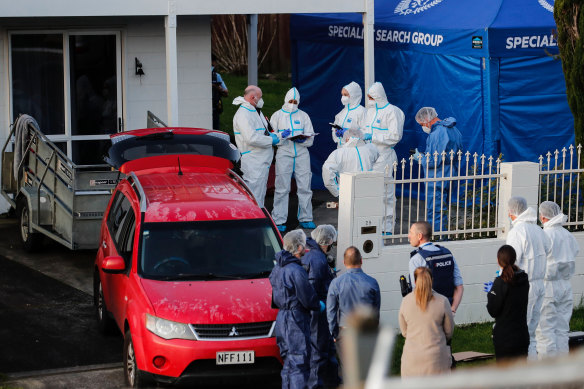 New Zealand police investigators working at a scene in Auckland on August 11, 2022, after bodies were discovered in suitcases.Credit:Dean Purcell / New Zealand Herald via AP

“To have someone in custody overseas within such a short period of time has all been down to the assistance of the Korean authorities and the co-ordination by our NZ Police Interpol staff.”

New Zealand and the Republic of Korea have an existing extradition treaty, meaning the move is likely to succeed.

The gruesome discovery of the human remains inside two suitcases last month shocked Kiwis, and led police to open a homicide investigation.

The remains were discovered by a family who purchased the contents of an abandoned storage locker in South Auckland at an auction, without knowing what was inside.

A police assessment suggested the remains belonged to two children, aged between five and 10 years old.

“Early indications suggest these children may have been deceased for a number of years before being found,” Vaaelua said at the time.

“We also believe the suitcases have been in storage for a number of years.”

Neighbours, including a crematorium worker, told local media of a “wicked smell” in the area when the remains were first unearthed.

NZ Police began working with Interpol after identifying international links through their investigation.

They completed formal identification last month, but the coroner issued a non-publication order to suppress the children’s identities at the family’s request.

“This is no easy investigation,” Vaaelua said last month.

“No matter how long, or how many years, you serve and investigate horrific cases like this, it’s never an easy task.”