Woman dies after car crushed by tree near Hanging Rock

A woman has died and another man injured after the car they were travelling in was crushed by a large tree near Hanging Rock, north-east of Melbourne.

Emergency services were called to South Rock Road at Woodend about 2.30pm on Thursday after reports a tree had fallen on a moving car.

A spokeswoman for Ambulance Victoria said paramedics assessed two patients at the scene, but the female passenger could not be saved.

The man who was driving the car was taken to Royal Melbourne Hospital with non-life threatening injuries and is now in a stable condition.

A Victoria Police spokesman said detectives are still working to establish the exact circumstances of the crash and investigations were ongoing.

South Rock Road is the main arterial road leading to the entry of popular tourist destination Hanging Rock. The venue’s precinct includes the peak’s summit walk, a racetrack and a concert venue. 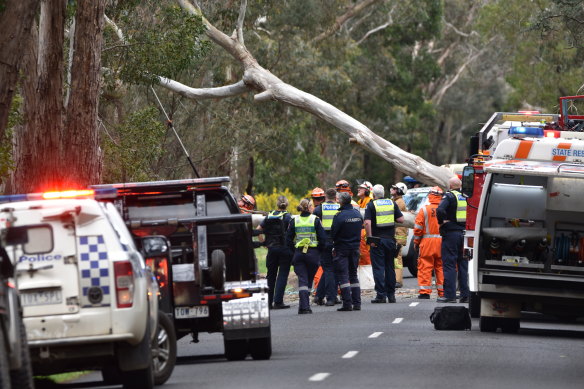 Emergency services personnel at the scene of the crash on Thursday.Credit:Nine News

Australian musician Nick Cave is expected to perform at the Hanging Rock venue on Friday and Saturday next week, with indie singer-songwriter Courtney Barnett as his support act.

Anyone who witnessed the crash, has dashcam footage or information is urged to contact Crime Stoppers on 1800 333 000 or submit a confidential report online at www.crimestoppersvic.com.au