Woman in high-speed chase after allegedly driving into two officers

A woman has been arrested in the back yard of a suburban home where she was hiding after allegedly driving at two police officers in a car park before leading an hour-long chase across Melbourne.

Police were called to a fast-food restaurant on Ballarto Road in Seaford about 2.40pm on Tuesday to perform a welfare check on a woman who police thought may have been unwell. 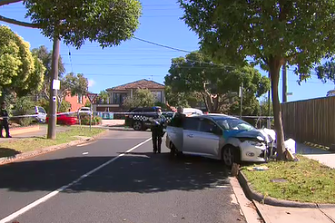 Police at the scene of the crash in Burwood on Tuesday.Credit:Nine News

Police say that when they arrived at the restaurant the woman allegedly drove her vehicle into the officers, pinning one against the wall and running over the leg of the other.

The woman then fled in a silver Ford sedan, police allege.

The two officers, a man and a woman, were taken to hospital and are in a stable condition.

The police air wing then followed the woman as she drove across the city for almost an hour, at times allegedly reaching speeds of 170km/h. 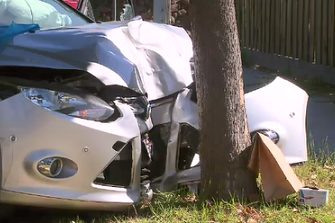 Anyone who witnessed the incident or has dashcam footage of the vehicle should contact Crime Stoppers on 1800 333 000 or submit a confidential report at www.crimestoppersvic.com.au