A woman who became the face of China’s #MeToo campaign has been shoved and antagonised as she headed to court in Beijing on Tuesday.

Zhou Xiaoxuan, 28, a former intern at Chinese state broadcaster CCTV, went public with sexual harassment accusations against a prominent CCTV host in 2018, one of the few remaining cases related to the feminist protest movement.

Since then, the #MeToo movement has been largely shut down by authorities as activists found their online posts censored and faced pressure from authorities when trying to hold protests. Despite this, Ms Zhou has continued to speak out. 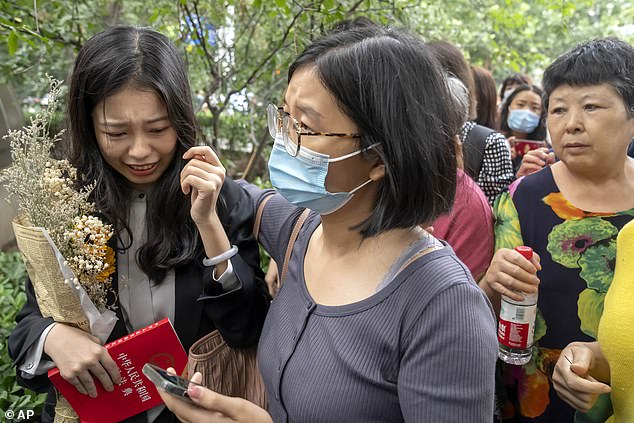 Zhou Xiaoxuan, 28, (left) brought a sexual harassment case against prominent CCTV host Zhu Jun, and was pushed and shoved as she headed to court for the final hearing on Tuesday

Several people tried to prevent her from talking to reporters as she headed to court, while a supporter had a sign ripped out of their hand.

Outside court, Ms Zhou told reporters: ‘I’m very thankful for everyone, whether we win or lose, I’m very honoured to have experienced these last three years.’

As she spoke, unidentified men and women came up and tried to push her away.

One woman yelled ‘pandemic safety,’ trying to prevent Ms Zhou from speaking, while a man questioned whether it was appropriate for her to speak alone.

A supporter who tried to hold up a sign saying ‘Standing Together’ was quickly surrounded by police and had the sign ripped out of their hand. 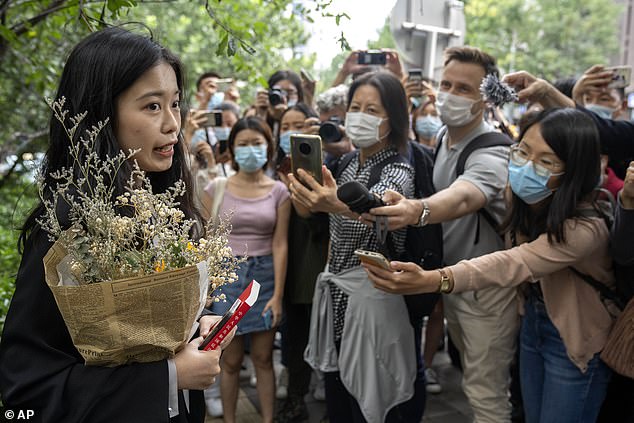 They said later that police then asked for their national identification number.

The proceedings mark the final hearing in a lawsuit brought by Ms Zhou against CCTV host Zhu Jun, after she accused him of groping and forcibly kissing her when she was a 21-year-old intern in 2014, allegations he denies.

While the movement no longer holds protests and lawyers and others are helping victims take legal action, some people are still pushing to get justice for victims of sexual violence, even if they do not cite the #MeToo label.

A series of sexual assault and rape accusations in recent weeks has drawn national attention. Outside court, Ms Zhou told reporters: ‘I’m very thankful for everyone, whether we win or lose, I’m very honoured to have experienced these last three years’ 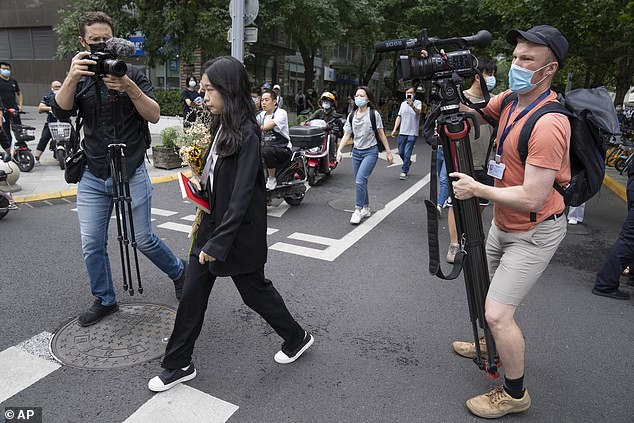 The most prominent was an accusation of sexual assault made by an Alibaba employee against two men. Chinese-Canadian singer Kris Wu was also arrested in Beijing on suspicion of rape over accusations made online.

In August, accusations posted online by victims led to the detention of a maths teacher on charges of forcible molestation as well as the sacking of a popular TV host at Hunan Television.

Shanghai police, who initially declined to press charges in the latter case, have said they have reopened the investigation.

‘These incidents are a part of #MeToo, without a doubt,’ said Lu Pin, the founder of Feminist Voices, an online publication that was shut down by censors in 2018.

‘Without #MeToo, it’s impossible to imagine these types of things coming out.’ 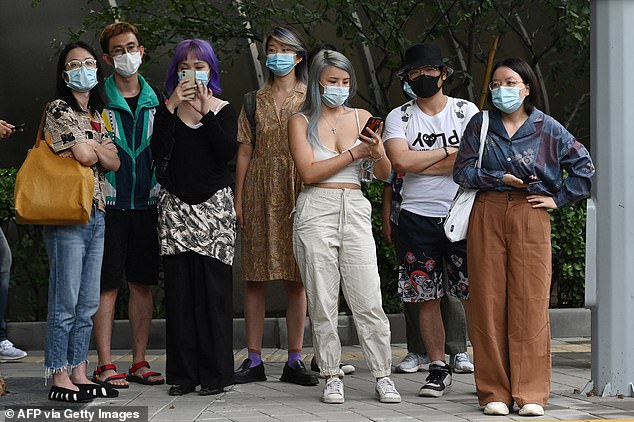 A few dozen supporters (pictured) came on Tuesday to back Ms Zhou, though many kept their distance because of the large number of police

After the #MeToo movement swept China, authorities responded with legal changes that activists and legal experts say have not yet led to real change on the ground.

They defined sexual harassment in the country’s civil code, a massive effort approved in 2020 that organised civil laws and promised certain rights to citizens.

Zhou’s case was delayed for two years before a Beijing court agreed to hear it last December. The second part of the hearing, originally scheduled for May, was cancelled on the day by the court.

A few dozen supporters came on Tuesday to back Ms Zhou, though many kept their distance because of the large number of police.

Many police were in plainclothes and took film footage. 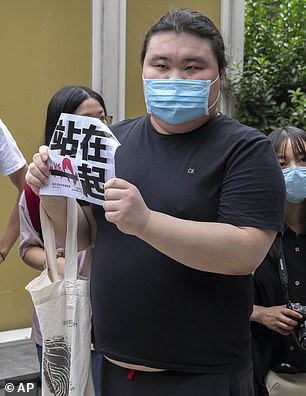 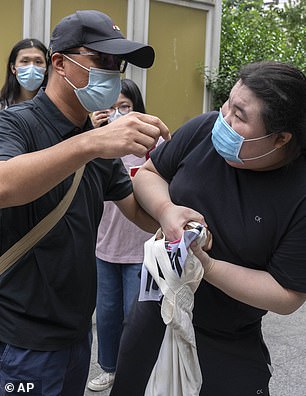 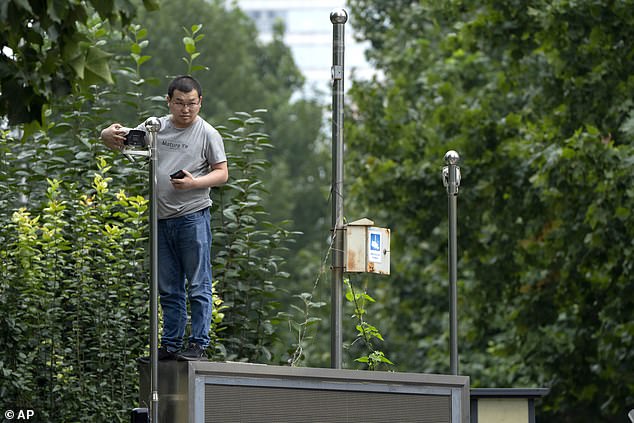 Throughout, Zhou has pushed to make the court hearing a matter of public record and requested the court order Zhu Jun to appear, citing basic court procedures.

When she filed the suit in 2018, such complaints were treated as labour disputes or under other laws that did not relate directly to sexual harassment. Ms Zhou’s was termed a ‘personality rights dispute’.

The court rejected a request by her lawyers to have her case heard under a legal provision enacted after she filed the suit that explicitly cites sexual harassment.

‘I believe that justice in these basic procedures is a necessary path to take to get a fair result, and all the efforts we made before the hearing are not just for victory, but for a fundamental fairness,’ Ms Zhou wrote on her WeChat social media account on Monday.