Bengaluru: Serum Institute of India, the world's largest vaccine producer, says it has made 40 million doses of AstraZeneca's potential COVID-19 vaccine, and will soon begin making Novavax's rival shot, as they both seek regulatory approval.

Serum said on Thursday it had enrolled 1600 participants in India for late-stage trials of AstraZeneca's candidate, and also planned to seek regulatory approval to run late-stage trials for the Novavax vaccine. 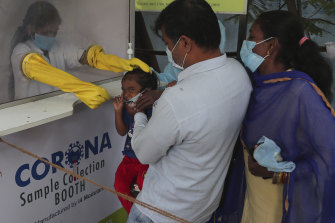 A health worker takes a nasal swab sample from a child at a COVID-19 testing centre in Hyderabad, India.Credit:AP

The AstraZeneca vaccine, co-developed by Oxford University, is the most advanced in human testing in India, Serum said, adding that the company and the Indian Council of Medical Research (ICMR) would pursue "early availability" of the shot in India.

The Australian government has also signed a deal to have the AstraZeneca/Oxford vaccine produced in Australia by CSL.

Representatives for both Serum and the ICMR declined to comment on whether the 40 million doses of the vaccine were meant for supply only in India.

The ICMR, a federal government body, had funded the clinical trial site fees for the AstraZeneca vaccine, Serum said. The company and the ICMR are currently conducting mid-stage clinical trials of the shot at 15 centres across India. 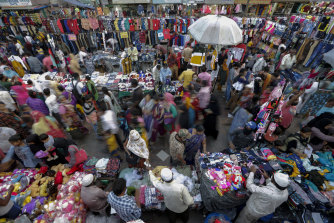 Indians throng a market for shopping ahead of Hindu festival Diwali in Ahmedabad. Officials are worried the festival will be a coronavirus superspreader event.Credit:AP

The news came as coronavirus infections in the country, the world's second-worst hit, reached 8.68 million on Thursday and the death toll increased to more than 128,000.

But overall, the country has been adding fewer cases daily since a mid-September peak, and its fatality figure of 92 per million people is well below the world's tally of 160 and the United States' 711.

Still, the state-run Indian Council of Medical Research says the recent fall in cases nationally could be undone if there is a resurgence in infections around Diwali celebrations which start this weekend.

ICU facilities in Delhi are in such short supply that some hospitals are squeezing more beds into existing wards ahead of the five-day festival of lights.

"We are firefighting because Diwali is looking like a superspreader event in front of us and the public just doesn't see the threat," said a senior health department official in Delhi, declining to be named.

Delhi's sprawling bazaars have been swarming with shoppers ahead of the festival and the wedding season after the government relaxed regulations in a bid to breathe life into the lockdown-hit economy. Mask-wearing is common but social distancing is not, and infections may spike in coming days.

The city was one of the first in the country to restart economic activity after the lockdown that started in March, letting restaurants, malls and other businesses restart to avoid spiralling joblessness.

Federal authorities have asked the local government in the capital to prepare resources to handle as many as 15,000 cases a day and test more aggressively.

Over half of the city's 16,511 COVID hospital beds were occupied as of Wednesday, government data showed, with more than 24,000 other patients isolating at home. There is no separate data for ICU beds.

India also has at least two home-grown COVID-19 vaccine candidates in development, while local drugmaker Dr Reddy's Labs is carrying out a trial in the country for Russia's vaccine candidate.

Earlier this week, Pfizer and its partner BioNTech said their vaccine candidate had proven more than 90 per cent effective based on initial trial results. Pfizer said it was committed to advancing its engagement with India's government to supply its potential vaccine in the country.

A trial of the Chinese-backed CoronaVac candidate was stopped in Brazil on Tuesday because of a serious adverse event regarding one patient. It has since been allowed to resume.

A police report obtained by The New York Times says the participant's death, which occurred on October 29, was being investigated as a suicide. A senior government official for the state of Sao Paulo, which runs Instituto Butantan that is handling the late-stage trial, said that fact led health experts at the institute to conclude that it did not raise red flags about the safety of the vaccine.

The most important news, analysis and insights delivered to your inbox at the start and end of each day. Sign up here.