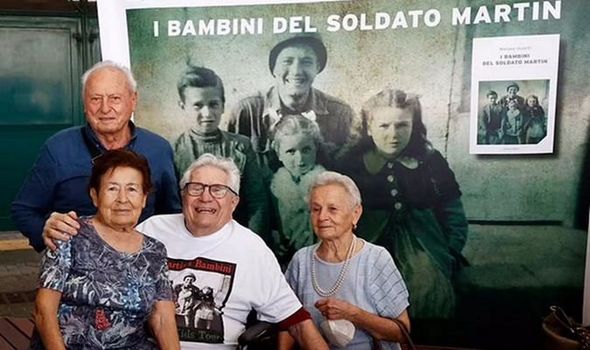 Martin Adler, 97, last saw the Naldi siblings when he found them hiding in a basket in a village near Bologna in 1944. Mr Adler, then a 20-year-old American soldier, was searching for Germans when he stumbled upon the large wicker container covered with a cloth.

He was about to shoot at the basket when the children’s mother ran into the room screaming “bambini, bambini!”- “children, children!” And two little girls and a boy, aged three to six, emerged.

Giuliana Naldi, 80, the youngest of the trio, said Mr Adler and a fellow soldier laughed when they saw the children and were glad they didn’t shoot.

She also recalled eating “so much” of the American chocolate Adler had given to them.

His regiment stayed in the village for a while and it is reported that he would often visit the and play with them.

Nearly eight decades on, Mr Adler’s daughter, Rachelle Adler Donley, decided to post a black and white photograph of her father and the children on some WW2 groups on social media.

Eventually, the photo was spotted by WW2 author, Matteo Incerti, and he tracked Adler’s regiment- the 339th Infantry- and where it had been stationed during the autumn of 1944, the New York Times reports.

Mr Incerti then launched an appeal to find the children and the treasured photograph was published in the media across Italy.

By chance, the daughter of one of the Naldi siblings was watching and recognised them in the photo.

On Monday, Mr Adler flew from his home in Florida to reunite with Giuliana, 80, Bruno, 83, and Mafalda, 82, at Bologna airport.

Mr Adler was wearing a white T-shirt with the cherished photograph printed on the front and handed each sibling a bar of American chocolate.

He said at a press conference: “I never thought I would be back to see the children. My heart is bursting. Grazie, grazie.”

Bruno Naldi was also thrilled, saying: “It has been wonderful. He kept the photo for 77 years, he searched for us and found us, and then he came to see us. What a beautiful tale.”

Now, Mr Adler will enjoy some time in the village where he first met them before traveling to Florence, Naples and Rome, where he hopes to meet Pope Francis, his daughter said.