Big E has revealed to Daily Star Online The New Day were far from happy at their on-screen separation – but feels their pleas to not be fully split up were listened to.

He remains on Friday Night SmackDown, meaning fans get a double dose of the power of positivity each week.

It’s clear that, whilst now on separate shows, the trio haven’t disbanded as an entity and will almost certainly link up again at some point in the future.

In an exclusive interview, however, the 34-year-old us they were less than impressed when they got wind of the news that The New Day would be spread across Raw and SmackDown. 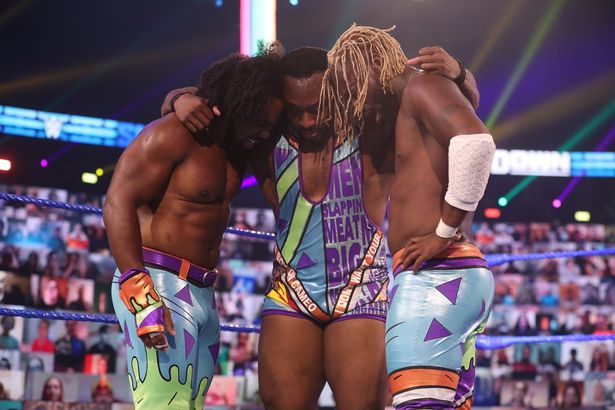 "For some reason I thought [the talk of splitting] was gaining some more momentum lately, and I talked to someone backstage and was like 'This is not something we want – just to let you know, we don't want to be broken up.'

"Then, before the Draft we got some insight into what might go down, and to say we were not pleased would be an understatement.

""I always think 'control what you can', and this is what we've been given.

"One of the saving graces is that I didn't hit Kofi or Woods with a steel chair and they didn't turn on me.

"We're on a hiatus is what I'd like to say. I don't know if you've seen Friends, but we're on a break!

"Hopefully we'll get back together soon and this will allow people to miss us being together and, when we do get together, the reunion will have some excitement."

While the decision to spread The New Day rather than split them up will ultimately have been made by WWE supremo Vince McMahon.

Nonetheless, it’s plausible that the Draft move was something of a compromise, given they’d been so vocal about not breaking up altogether.

"There is some consideration, I would imagine so,” says the former United States Powerlifter and a multi-time WWE tag team champion on whether their opinions carried weight backstage.

“That's one thing I am grateful for, that a lot of times I can knock on our boss's door and say 'hey, this is my idea and what I think works best.'

A former NXT graduate with well over a decade with WWE already under his belt, the livewire E – real name Ettore Ewen – is a fan favourite who brings incredible energy on to screens each and every week.

He thinks his larger-than-life character may yet be exactly what keeps him in McMahon’s good graces – that and a will to improve not only his standing but also that of any other wrestler or performer he’s working with.

McMahon himself always was and still is a character that thrives on the exaggerated and grandiose, so it’s clear to see why the former NXT Champion’s performances so often resonate with the boss.

"I often hear stories where we've been doing something, and Vince has been cackling [backstage] over the headset,” adds E.

"All these years later he's still entertained by this nonsense!

"I do think that's one of the things he truly loves – the characters.

"Unfortunately, we have guys who are incredible in the ring, but maybe not so much on the mic, and maybe they don't have these fully fleshed-out characters.

"Too often those guys don't get the opportunities they should [get] based on their abilities because the main roster is essentially about characters and personalities.

"We've seen guys in the past, and I don't want to names, who aren't very good in the ring but are great characters and great talkers, get all these opportunities.

"It's because they bring an energy and a unique character. That's what I've always tried to do – to be memorable – because that's what he gravitates to."