Singapore: Devastated by natural disaster and in the grip of a COVID-19 outbreak, there is a new controversy in East Timor.

Former president Xanana Gusmao has defied a virus lockdown to rally a crowd of hundreds outside an isolation facility to demand the release of the body of a man recorded as only the second COVID-related death in the country. He also denies the patient contracted the illness and warned people not to go to hospital if they got sick.

The independence hero, who was the country’s first president from 2002 to 2007 and then prime minister until 2015, has been caught on video engaging in a heated argument on the street with Health Minister Odete Maria Freitas Belo and slapping two mourners. 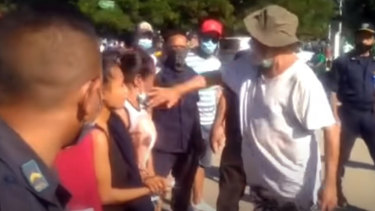 Gusmao was demanding the release of the body of Armindo Borges, who died aged 47 on Sunday night while being transported from Dili’s National Hospital to the Vera Cruz isolation centre after testing positive to COVID-19.

Adamant the man had died of health reasons unrelated to the virus, he led a tense stand-off at the gates of the facility on behalf of the man’s family. Relatives wanted the body returned for a funeral ceremony rather than allow it to be buried by the government according to its virus protocol.

There is a declared state of calamity in the tiny south-east Asian nation following floods and landslides that last week killed at least 42 people and left 70 others missing, striking less than a month after the capital was thrust into lockdown due to a surge in COVID cases.

With a damage bill in excess of $100 million in the capital alone, the Australian government has responded to pleas for international help with the announcement of a $7million emergency relief package.

However, it’s the threat posed by the coronavirus, which brought the first COVID death in a country that has managed the pandemic relatively well so far, that took centre stage on Monday, with Gusmao the lead actor.

Gusmao was also filmed repeatedly slapping the face of two relatives of the deceased man – a man and a woman – in an apparent attempt to calm them down.

“I will [tell] the people that if you feel sick do not go the hospital because if you go there they will treat you for COVID-19 immediately,” Gusmao told the health minister as the crowd looked on. 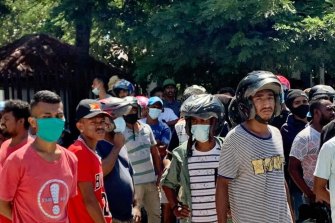 Crowds gather in Dili as Xanana Gusmao attempted to retrieve a body from a medical faciility.

The minister replied: “How, Uncle Xanana, do you not believe that this is not COVID-19? We have the result. The result shows he [was] positive for COVID-19”.

“I will wait here until I take the dead body,” he said as he sat on a plastic chair outside at the isolation centre.

According to the first death report from local media outlet The Oekusi Post, the deceased man had previously had a minor stroke and had a sudden attack on Sunday, leading his relatives to call an ambulance, which rushed him to hospital.

As for the 74-year-old Gusmao, who was set to become prime minister again last year before his National Congress for Timorese Reconstruction party’s coalition fell apart, it’s not his first run-in with controversy this year.

In February he was criticised for meeting with American priest Richard Daschbach, who is now facing 14 counts of sexual abuse of children under 14, child pornography and domestic violence at an orphanage he ran for many years. Daschbach was a formerly revered figure in the predominantly Catholic country.