Yemen escalation: Why Houthis ramp up attacks on Saudi Arabia

Houthi attacks on Saudi territory have markedly escalated, coinciding with increasing US pressure on Iran. 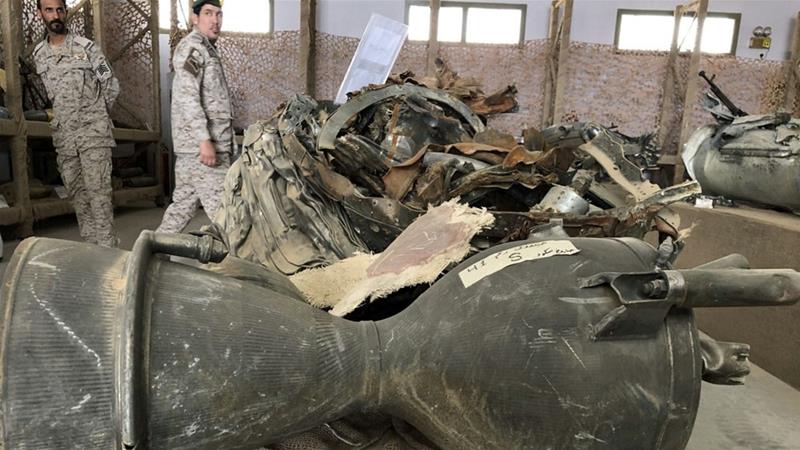 Over the past four years, since the beginning of Saudi-led military intervention in Yemen in March 2015, the conflict in the poorest Arab nation has gone through various phases, with calamitous consequences for Yemeni civilians.

However, in recent weeks, Houthi attacks against military and civilian targets within Saudi territory have markedly escalated, which notably coincided with amplifying pressure from the United States and its allies on Iran, a key regional supporter of Yemen’s Houthis.

The surge in Houthi attacks may be aimed at showing the US and its allies that any conflict between them and Iran risks igniting a regional war, analysts told Al Jazeera. Others see the attacks as asymmetric retaliation against US regional allies by Tehran, which lacks the economic or diplomatic power to punish Washington in response to US-led sanctions and “maximum pressure” campaign against Iran.

The US and some of its European and Middle Eastern allies have accused Iran of supporting the Houthi rebels, including by providing arms, in an effort to expand its influence in the Arabian Peninsula and build a proxy force similar to the Lebanese Hezbollah that could serve as a source of power and deterrence against its chief rival Saudi Arabia.

In January, the United Nations’ experts concluded in an 85-page report to the Security Council that Tehran was illegally shipping fuel to Yemen to finance their war effort. A year earlier, a UN panel had criticised Iran for violating an arms embargo on Yemen by enabling Houthis obtain Iranian missiles. Tehran has repeatedly dismissed these allegations.

In the latest of a consistent string of attacks on Saudi positions, Houthi rebels hit a power station in Al Shuqaiq city in the kingdom’s southern province of Jizan with a “cruise missile”, the group’s Al Masirah TV channel reported on Thursday. 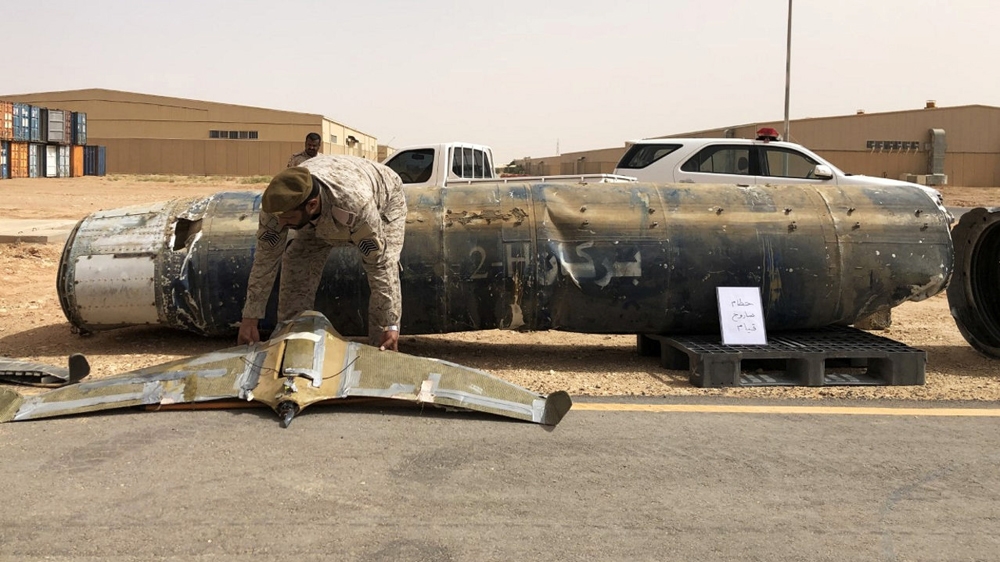 Reacting to the incident, US Navy Commander Rebecca Rebarich said such attacks were “a significant cause for concern and [put] innocent lives at risk”.

On Monday, Houthis launched a drone assault against the Abha airport in southern Saudi Arabia, less than a week after they targeted the airport with a cruise missile, wounding 26 civilians. 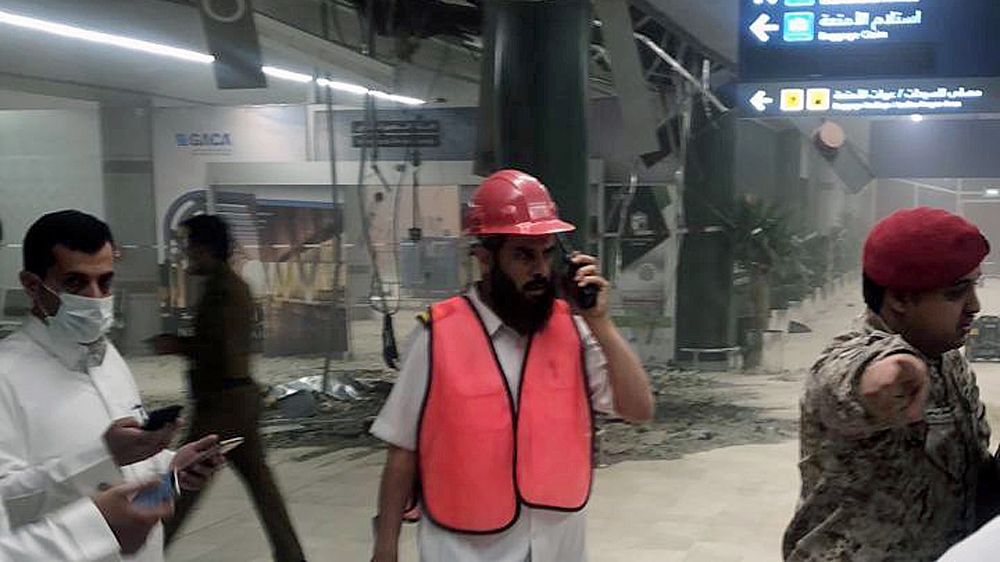 In a significant escalation on May 14, Houthis staged a number of drone attacks on the Aramco East-West pipeline and oil stations deep within the Saudi territory, which caused minor supply disruptions but highlighted an apparent leap in the Houthi drone capabilities.

“The Saudi and Emirati complicity in aiding and abetting tough US sanctions against Iran is, to some extent, driving this surge in Houthi attacks. But Tehran’s support for Yemeni rebels is not simply based on Iranian geopolitical interests and cannot be reduced to a personal revenge against the Saudis,” a Tehran-based intelligence analyst affiliated with the Islamic Revolutionary Guard Corps (IRGC) told Al Jazeera on condition of anonymity.

“It is also ideological and aimed at backing the ‘dispossessed’ of the world,” the analyst added, referring to Article 154 of the Iranian Constitution which stipulates that the Islamic Republic would support the struggles of the oppressed against the oppressors “anywhere in the world”.

Houthis themselves blame the “Saudi aggression against our country” for increased assaults and their adverse implications for the Hodeidah agreement, insisting that they will continue attacks against civilian airports and military sites – which rebels now see as “legitimate targets” – until the Saudi-led military intervention, now in its fifth year, persists.

On Wednesday, the Armed Conflict Location Event Data Project (ACLED) – a non-governmental body that collects and analyses data on political violence around the world – announced in a new estimate that the Yemeni civil war has claimed at least 91,600 lives, excluding deaths caused by war-related humanitarian disasters such as starvation and cholera.

The report suggests that the Saudi-led coalition and its allies are responsible for the majority of civilian deaths. In a stark instance, two coalition air raids on a funeral in Sanaa in October 2016 killed 155 and wounded 525 people. 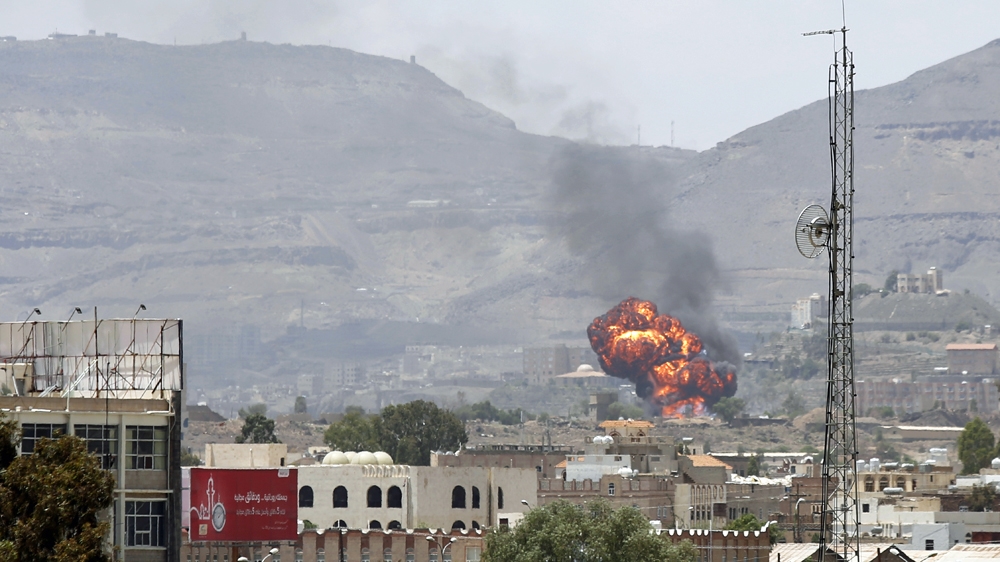 “They regard this a right to respond to Saudi-led military campaign since 2015,” al-Rodaini said, adding she sees no link between Houthi retaliation on the one hand and Saudi-Emirati role in ratcheting up US-led pressure against Iran on the other.

The uptick in Houthi assaults against Saudi positions and its possible link with the growing economic and military pressure on Iran suggests that in the event of a US-Iran conflict, Saudi Arabia may be a prime target of Iranian missiles and Yemeni drones. Such an eventuality would further set back Saudi military efforts to restore overthrown President Abd-Rabbu Mansour Hadi to power and deny Tehran a strategic foothold in the Arabian Peninsula.

Houthis’ intensified military campaign against the Saudi-led coalition has cast doubt on the plausibility of the Hodeidah truce, brokered by the UN during negotiations between the warring parties in the Swedish capital, Stockholm, in December.

Under the ceasefire deal, the Houthis agreed to hand over the control of Hodeidah, Saleef and Ras Isa ports to “local authorities in accordance with Yemeni law”.

“While the administration of [Iranian President Hassan] Rouhani was pushing the Houthis to accede to the Hodeidah ceasefire, the IRGC wasn’t happy with this course of action absent proper concessions by the Arab coalition states,” the IRGC-affiliated analyst explained.

“After the Hodeidah accord, the rebels’ focal theatre of operation shifted from Yemeni to Saudi territory.”

The Houthis’ motive seems to be twofold: take the fight inside the Saudi territory and inflict considerable damage on its infrastructure in retaliation for “daily aggression” by the Saudi-led coalition, and signal that growing pressure on Iran as the main backer of Houthis would come at a price for Saudi national security.

Yet, perhaps the most underreported aspect of the Yemen war is the foreign support provided in particular by the US and the United Kingdom in the form of armaments, personnel and expertise. In early April, Channel 4 aired an investigative documentary – Britain’s Hidden War – on the British role in the Saudi-led intervention and “the extent to which the war in Yemen is made in Britain”.

According to an employee of BAE Systems, the UK’s biggest defence contractor, “If we weren’t there, in seven to 14 days, there wouldn’t be a jet in the sky.” BAE Systems employs over 6,000 people on the ground in Saudi Arabia.

“These bombs that are being dropped on us are made in the UK, US, and France, which are selling arms and providing intelligence and aircraft refuelling services to Saudi Arabia. So if the US and the UK want this war to be over, it will be over, it depends on them,” Ahmad Algohbari, a Sanaa-based Yemeni journalist and founder of grassroots aid organisation Yemen Hope Relief, told Al Jazeera.

“They are thus refuelling the war, and as long as they do so the war will see no end, and this is a big problem because they do not care about our lives in Yemen. They only care about building their economy and offering jobs to their own people.”

In a highly controversial instance in August 2018, the Saudi-UAE military killed at least 51 people, including 40 school children, in an air raid that used a 500-pound (227kg) laser-guided MK 82 bomb made by Lockheed Martin, one of the top US defence contractors.

“MBS [Saudi Crown Prince Mohammed bin Salman] is a reckless leader also engaged with his own domestic agenda in Saudi Arabia, but I wonder how tenable his approach to Yemen would be in the absence of US and UK support,” Anna Stavrianakis, a senior lecturer in international relations at the University of Sussex and expert on the British arms export policy, told Al Jazeera.

“And it does so to try and pressure Yemen’s civilian population away from supporting the Houthis and into supporting its preferred government.”