You Dimi-wits! Foreign Office use wrong picture in first-name bungle

After two hours it was taken down but they did not appear to have a photo of the correct sanctioned Russian.

Instead they bizarrely reposted the message again, but with a nonsensical showy figure in his place

Professor Dmitry Grozoubinski said: ‘It’s not hugely encouraging the FCDO used a photo of Dmitry Medvedev on this poster sanctioning Dmitri Lebedev and have thus far left it up for two hours.

‘For the record they look nothing alike.’ 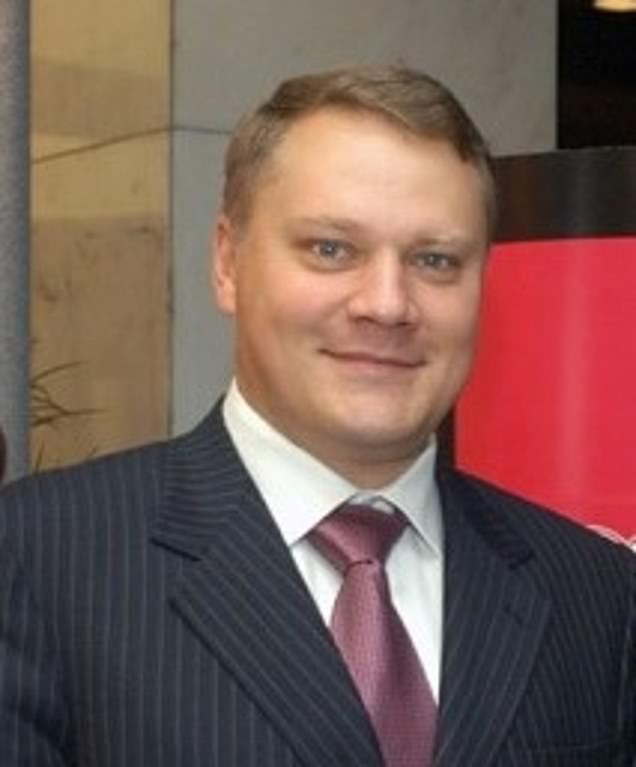 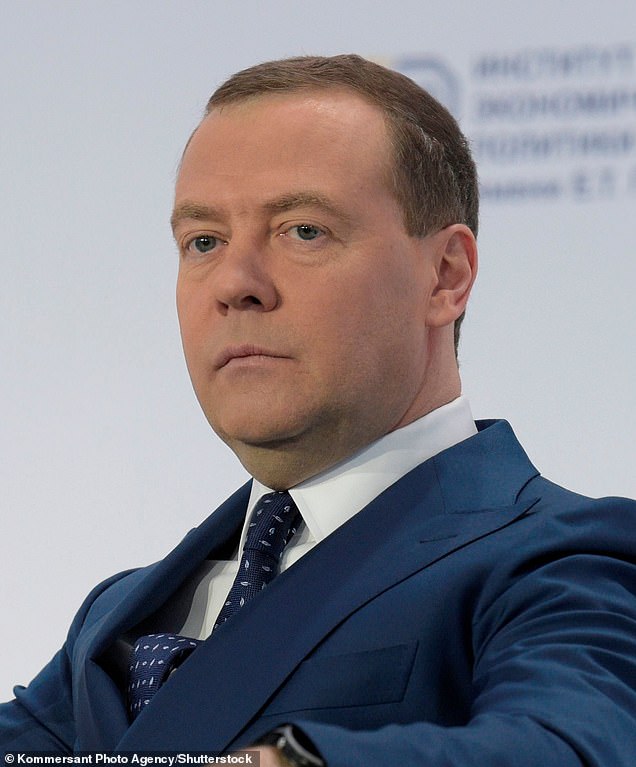 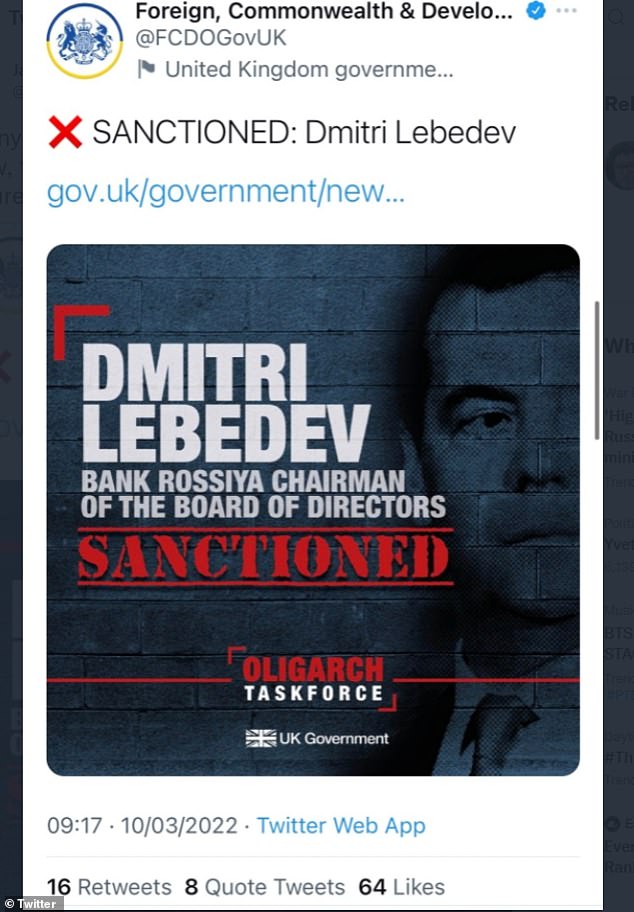 A spokesman for the FCDO said: ‘This was an administrative error which was quickly spotted and rectified.’

Chelsea FC owner Roman Abramovich was sanctioned over his links to Vladimir Putin in the fresh round of oligarchs punished.

Branded a pro-Kremlin oligarch, Mr Abramovich was hit with an asset freeze and a travel ban on Thursday after ministers came under sustained pressure to target him over the Russian President’s invasion of Ukraine.

The updated sanctions list, which hits seven new Russian elites, said Mr Abramovich has had a ‘close relationship for decades’ with Mr Putin, which the billionaire has previously denied.

‘This association has included obtaining a financial benefit or other material benefit from Putin and the government of Russia,’ the Government said.

Oleg Deripaska, an industrialist worth £2 billion who has had close links with the British political establishment, was also targeted, as was Mr Putin’s ‘right-hand man’ Igor Sechin, who is the chief executive of the Rosneft state oil firm.

Foreign Secretary Liz Truss said the Government targeted the oligarchs to ‘ramp up the pressure on the Putin regime and choke off funds to his brutal war machine’.

‘With their close links to Putin they are complicit in his aggression,’ she said. ‘The blood of the Ukrainian people is on their hands. They should hang their heads in shame.’ 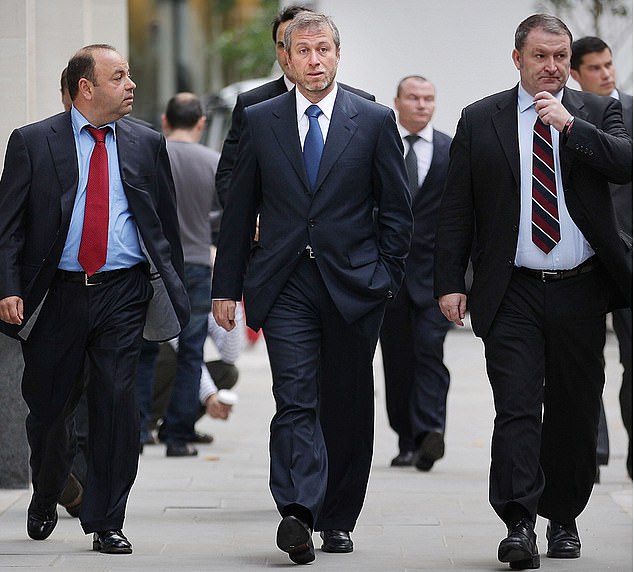 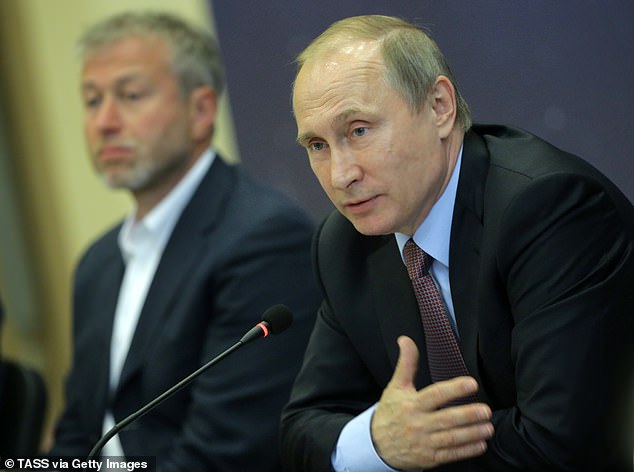 Russia’s president Vladimir Putin during a meeting with businessmen who engage in charity projects,, alongside Roman Abramovich

Roman Abramovich is one of seven Russian oligarchs sanctioned by the UK Government today.

The Government estimates his wealth at more than £9billion and notes his stakes in steel giant Evraz, Norilsk Nickel and ownership of Chelsea FC.

‘He is one of the few oligarchs from the 1990s to maintain prominence under Putin,’ a Government spokesman said.

The other oligarchs sanctioned today are:

Ministers issued a licence authorising Chelsea, which was hit by the asset freeze, to continue playing matches.

Season ticket holders and those with games already booked can still attend matches, but no new tickets can be sold and the club’s merchandise shop will close.

Downing Street is ‘open’ to a sale of Chelsea, as has been planned by the oligarch, but said a separate licence would need to be approved by the Treasury and that ‘under no circumstances’ could he profit from it.

Jets and yachts owned or chartered by Mr Abramovich, who is worth about £9.4 billion, can now been seized.

After critics urged Boris Johnson to go further in targeting the Kremlin’s backers, the Prime Minister defended the ‘very careful’ approach to imposing sanctions and stressed the need to establish ‘clear evidence’.

He warned Moscow of more sanctions to come, telling broadcasters during a visit to Merseyside that he would work with allies to ‘tighten the economic vice around the Putin regime’.

‘Every oligarch and those supporting Putin in any way should be sanctioned,’ he told reporters on a visit to the Tapa military base in Estonia.

Last week, Mr Abramovich, who has owned Chelsea since 2003, said he would sell the club, with the net proceeds being donated to a charity benefiting ‘all victims of the war in Ukraine’.

The 55-year-old’s spokesman said he would be playing a ‘limited’ role in trying to broker a ‘peaceful resolution’ to the Kremlin’s attack on its neighbour.

But on Thursday, the Government said Mr Abramovich had received financial benefits from the Kremlin, including tax breaks for his companies, the buying and selling of shares from and to the state at favourable rates, and contacts in the run up to the 2018 World Cup in Russia.

‘He is one of the few oligarchs from the 1990s to maintain prominence under Putin,’ a statement read.

Mr Deripaska, who has a multi-million pound property portfolio in Britain, has also been a prominent figure for years.

In 2008, he was embroiled in a row involving Labour grandee Lord Peter Mandelson and then-shadow chancellor George Osborne.

Both men met Mr Deripaska on his yacht, while Mr Osborne reportedly attempted to solicit a donation for the Tory party from the oligarch – something he denied at the time.

This afternoon a former Tory justice minister criticised the failure to tackle ‘the Russian oligarchs and the henchmen of Putin’.

Non-affiliated peer Lord Faulks made the withering criticism as the House of Lords started their scrutiny of legislation aimed at tackling ‘dirty money’ hidden in the UK, which is being urgently introduced following the Kremlin’s invasion of Ukraine. He has long campaigned for a register of overseas entities requiring foreign owners of property in the UK to declare their true identity, which is only now being brought forward as part of the Economic Crime (Transparency and Enforcement) Bill.

Other measures contained in the legislation, which went through the Commons in a day, include removing barriers to using unexplained wealth orders and strengthening the sanctions regime.

Lord Faulks said: ‘We of course understand why this Bill is being rushed through Parliament, but what I fail to understand is why the Government has taken so long to respond to what what was staring them in the face.’ He added: ‘We have allowed ourselves to be the receiver of stolen goods in this country.’

He said: ‘Reputable sources suggest that as many as 10 or more murders are attributable to Russia. Ukraine is not our fault, but we have embraced the Russian oligarchs and the henchmen of Putin.’ He added: ‘It (the Bill) contains some useful provisions and I thoroughly support them. They can no doubt be improved when the next Bill, comes along, but it should never have been necessary to come to this.’