Home » World News » ‘You don’t have any choice, you have to vote for me’: Trump steals the message in North Carolina

‘You don’t have any choice, you have to vote for me’: Trump steals the message in North Carolina

Havelock, North Carolina: Trying to prove his political clout by pushing a Republican to victory in a special election, US President Donald Trump used a North Carolina rally Monday to paint a bleak picture of a nation he claimed would be overrun with crime, poverty and immigrants if Democrats seize power in Washington.

Trump, appearing at his first campaign rally in nearly a month, went on the offensive in an effort to change a series of negative headlines over his slipping poll numbers, warning signs of an economic slowdown and a running battle over hurricane forecasts. He urged the Fayetteville crowd to vote for Republican Dan Bishop on Tuesday, brandishing his usual incendiary rhetoric to declare from the stage that "tomorrow is a chance to send a clear message to the America-hating left." 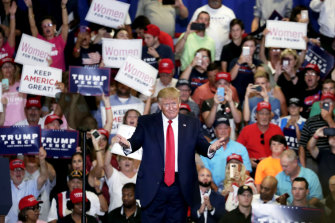 US President Donald Trump acknowledges the crowd as he speaks at a campaign rally in Fayetteville, North Carolina, on Monday.Credit:AP

While the stakes for the House are high, Trump's trademark rallies inevitably become more about him than the local candidate, as he uses the stage to settle political scores, sharpen attacks and take on perceived foes. With an eye to his own reelection next northern fall, he touted his administration's accomplishments but also urged voters to give him more time.

"That's why we need four more years," Trump said at the nearly 90-minute rally. "It's got to seed – it's a plant. It has to grow. It has to grow those roots. That's why 2020 is just as important. Because they will try to take it away."

Trump's appearance alongside Vice-President Mike Pence before the vote emerged as a test of the President's pull with voters. The special election could offer clues about the mindset of Republicans in the suburbs, whose flight from the party fuelled its 2018 House midterm election losses. 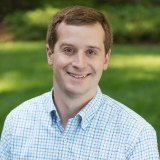 The election is for a House seat that flows eastward from the prosperous Charlotte suburbs into rural areas hugging the South Carolina border. State officials invalidated the November midterm election result following allegations of voter fraud by a Republican operative. The final tally found Republican Mark Harris ahead of Democrat Dan McCready by fewer than 1000 votes. Harris is not running again.

The seat has been held by Republicans since 1963. In 2016, Trump won the district by 11 percentage points at the presidential election. Should Bishop defeat McCready, it could give Trump room to assert that he pushed Bishop to the front. If McCready prevails or Bishop wins by a whisker, it will suggest Republican erosion and raise questions about Trump's and his party's viability for 2020.

"This will tell us if Trump can carry candidates through suburban districts or not," said Sarah Chamberlain, president of the Republican Main Street Partnership, which represents moderate Republicans. If not, she said, the party must "work harder to address the concerns of suburban individuals, mainly women."

But before leaving Washington, Trump dismissed questions of whether a poor result for the Republican candidate would serve as a warning sign in next year's elections. 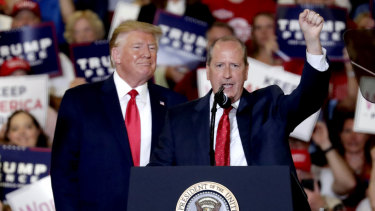 Trump offered up a robust defence of the trade war with Beijing. He pushed for Congress to approve his new US-Mexico-Canada trade deal. And he exaggerated the number of kilometres constructed on his promised border wall.

The rally was held just 160 kilometres from the site of a rally in July where "send her back" chants aimed at a Somali-born American congresswoman rattled the Republican Party and seemed to presage an ugly reelection campaign.

The chant was not heard on Monday.

Instead, Trump repeatedly painted the Democrats as a party that has moved to the extreme left on issues like immigration, abortion and health care.

"You don't have any choice. You have to vote for me," Trump told the crowd. "What are you going to do: Put one of these crazy people running? They are so far left."

"Your way of life is under assault by these people," he claimed.

Trump also expressed his support for the Second Amendment against the backdrop of a recent spate of deadly mass shootings. It comes as congressional Democrats push for expanded background checks for gun purchases and as Trump has flip-flopped on the issue amid pressure from the National Rifle Association.

In the hours before the rally, Trump flew to coastal North Carolina to inspect the damage left by Hurricane Dorian, but bad weather forced officials to scrap those plans. Instead, he received a briefing on Air Force One, where Democratic Governor Roy Cooper told him three deaths were connected to the storm and some 3500 people were without power.

Many of the President's comments about the storm have been defending his erroneous claim that Alabama was likely to face significant impact from it. Trump did not mention the matter at the rally.

Marshville residents Philip and Diane Ezzell, both 70, were near the front of the line on Monday waiting to enter the Trump rally. Both attributed their support for Bishop to his backing by Trump. "We like his values, and he supports Trump," Diane Ezzell said. "And we don't want no socialist clowns."

That was a reference to a TV spot by Bishop superimposing the faces of McCready and other prominent Democrats on swaying clown figures.

Cynthia Brown, of Fayetteville, 50, also attended the rally. Brown, who is black, said supporting Trump has been "a pretty lonely experience" for her. She added: "But that's OK. I'm not a follower."

Related posts:
any, choice, Don't, have, Yo, You
Celebrities