Horrifying images of bulls younger than two years old being tortured to death by children in Spain have been described as ‘unfit for a civilized country’.

The outrageous scenes were filmed yesterday at an arena in Cordoba, where student bullfighters – some apparently minors – were invited to skewer the helpless calves for entertainment.

Video shows the ears were hacked off one of the dying animals and presented to a child matador as a trophy, while another boy was handed the animal’s tail.

The footage also revealed a student bullfighter – seemingly a teenager – who appeared to have been injured, with his face caked in blood as he attacks. 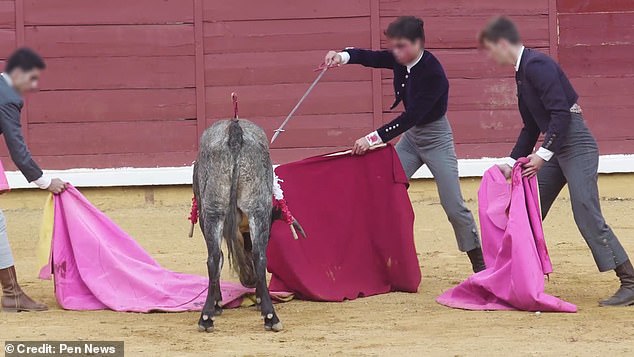 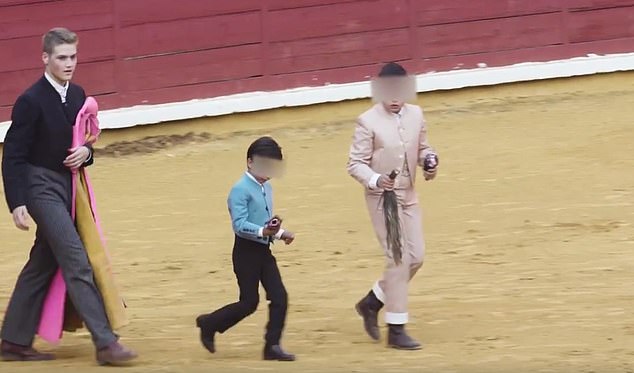 Once the ears and tail were hacked off the dying bull, child matadors paraded their trophies around the ring 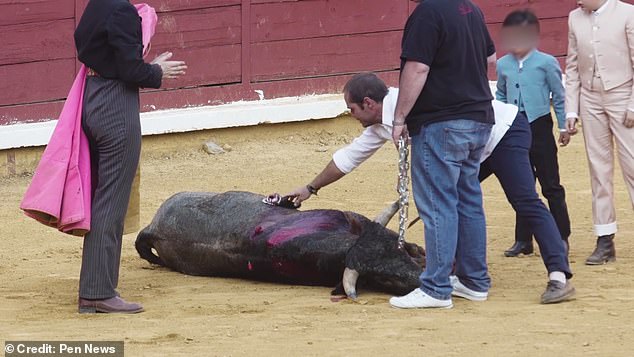 An adult cut off the ear and tail, then placed them on the bull before handing them to the children to take as trophies

According to campaigners from Animal Guardians and La Tortura No Es Cultura (Torture Is Not Culture), the outrage is repeated annually in a so-called homage to Cordovan women.

‘Every year they do this calf-fighting and they say they do it as a homage to Cordovan women,’ said Marta Esteban of Animal Guardians.

‘They also do it to promote the students learning bullfighting at different bullfighting schools in Andalusia.’

She continued: ‘The ear and/or tail of the animals are offered to the bullfighters if they perform well and then these are given to the public as a ‘present’.

‘As you see in the video, one of the animals is still alive when the ear is cut off. The other ear is moving while they do that.

‘We cannot know the exact age of the bullfighting students involved. Some look under 18. They can kill animals from 14 years on. 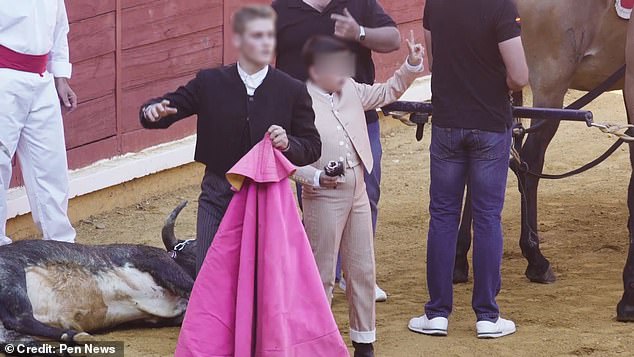 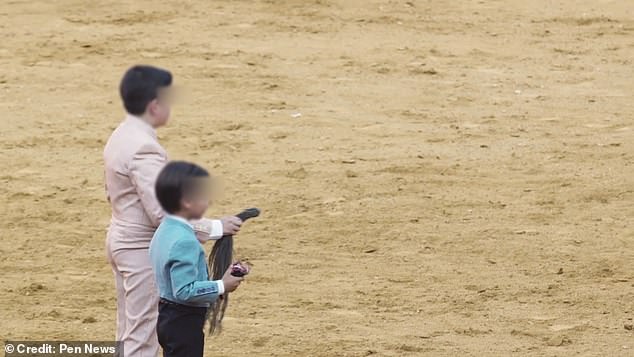 The two children paraded around the ring in Cordoba, Andalusia, holding the bull’s dismembered tail and hacked off ear

‘So those would be the ones actually torturing and performing in the bullfight.

‘Then there are spectators of any age and those who are invited into the bullring in their typical Cordovan costumes to pick up the ears.’

She added: ‘This gratuitous violence towards noble and innocent beings is carried out by young people, some probably under 18, and in the presence of minors. This is unfit for a civilized country.

‘We demand politicians take immediate measures so that this type of event stops taking place in our country, and children and adolescents are protected from this violence.’

Campaigners claim that the pain suffered by these calves would likely have been worse than those at other bullfights, because of the students’ inexperience. 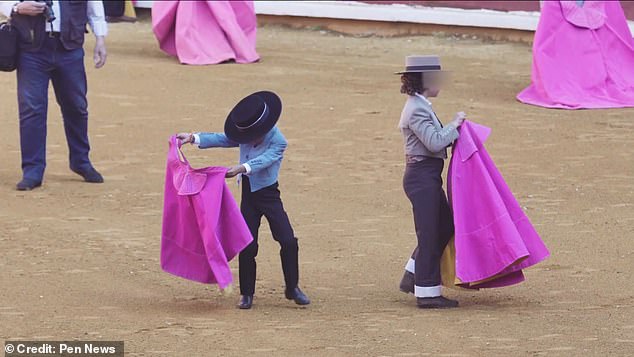 Student bullfighters, some apparently minors, were invited to skewer the helpless calves for the entertainment of the crowd

It can mean that the animals suffer unsuccessful thrusts that ruin their internal organs without killing them, lengthening their suffering.

Now they’re calling on women to flood council chiefs in Cordoba with complaints, letting them know that the gruesome spectacle is not in their name.

They’re also asking women to use the hashtag #NoQuieroTuHomenaje (I do not want your homage) on social media.

Carmen Ibarlucea, president of the La Tortura No Es Cultura, said: ‘Performing such an act of violence and torture towards young bulls in honour of women is an insult.

‘The woman is by nature protective and compassionate, not a lover of sadism and indifference towards the suffering of others.

‘If you want to pay tribute to women, prohibit these shows throughout Spain and build a society where culture is free of violence.’