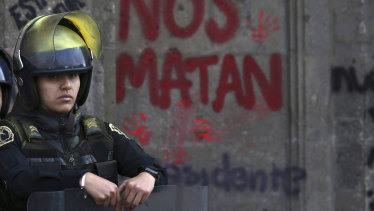 A stands guard outside the National Palace, the presidential office and residence, during a demonstration against gender violence in Mexico City.Credit:AP

Even in a nation accustomed to rampant homicides and frequent violence against women, the case of Ingrid Escamilla was particularly shocking. Pictures of her dismembered body were leaked on social media, causing widespread revulsion, anger and despair.

The shouts from protesters outside the palace could be heard as reporters questioned the president about measures to reduce killings. A crowd of about 100, most of them women, spray painted slogans on the ornate building that dates to the 16th century. Some splashed red paint on its doors.

One chant: "We are not dying. They are killing us."

Another protester told journalists: "Today we are all Ingrid Escamilla." 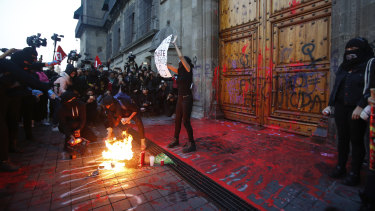 A masked, female protester stands with a sign before the media at the entrance to the National Palace, the presidential office and residence, after demonstrators covered it in fake blood and the Spanish message: “Femicide State” in Mexico City.Credit:AP

Lopez Obrador has enjoyed widespread popularity as he implements a leftist agenda to take on Mexico's traditional power brokers. But many see stemming the nation's epidemic violence as his biggest test.

Drug gangs kill with impunity, leaving their enemies' defiled corpses displayed as warnings. Murders of female workers have been a plague in border regions, with many disappearances uninvestigated.

In 2019, Lopez Obrador's first year in office, killings overall reached a record. The pace of women being killed more than doubled in the past five years, while the overall homicide rate is up 35 per cent in the period, Attorney General Alejandro Gertz said this week. Gertz has been fielding criticism by feminist groups who say he is trying to downplay violence against women as a special phenomenon.

Marches against gender violence have grown frequent in the nation's capital amid reports of rape and sexual harassment on campuses, including the main public university of Mexico, and as cases of brutal killings of women have emerged. 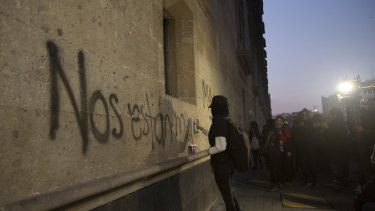 A masked, female protester sprays the Spanish message “They’re killing us” on the exterior of the National Palace in Mexico City.Credit:AP

The death of Escamilla has galvanised opponents. The victim was a teacher murdered in an apartment complex in Mexico City on Saturday. Her 46-year-old partner confessed to the killing in a video taken after his arrest, according to national media.

News outlets reported that he admitting stabbing her after an argument. She made a violence complaint against him in 2019 that she later dropped, according to El Universal newspaper.

On Friday morning, questions in the press briefing quickly turned to what the president known as AMLO plans to do to reverse the trend.

Lopez Obrador has tried to respond to rising concern about gender violence, but has also grown defensive at being questioned over the matter.

"We're doing things every day to guarantee peace and tranquillity. I'm not sticking my head in the sand, I'm not evading my responsibility," he said.

After several questions from reporters Lopez Obrador reeled off 10 declarations, including "it's cowardice to hurt a woman," and, "women need to be respected," and, "the government I represent will always be working to guarantee, always, the security of women."

He didn't commit to specific actions to protect women, such as creating a special prosecutor.

Demonstrations against violence against women have become more aggressive as women have sought to focus attention on the issue. Last year, marchers in Mexico City destroyed bus stops and smashed windows as part of their protests.

In another sign of women's frustration, thousands of them jammed Mexico City's central plaza, the Zocalo, in November to chant a Chilean protest song, "A Rapist in Your Path," that has become a feminist anthem throughout Latin America.