‘You’re a pathological liar’ ex-girlfriend says, then storms from court

As Constantine Arvanitis sat in the witness box rejecting claims he was a sex addict, the woman he is suing, Selina Holder, suddenly stood up and left the courtroom calling her ex-boyfriend a pathological liar.

The County Court defamation trial between the two warring exes continued on Wednesday over claims Ms Holder allegedly made that Mr Arvanitis was a sex addict, violent and a cheat. 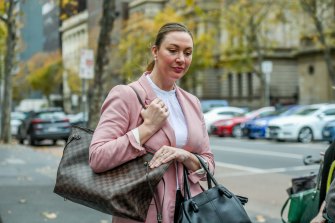 Selina Holder stormed out of a defamation trial on Wednesday.Credit:Joe Armao

As part of Ms Holder’s defence that the allegations are true, Mr Arvanitis faced further questioning from her lawyer, Barrie Goldsmith, about sexually suggestive messages the couple exchanged in 2016.

Mr Arvanitis has denied having a sexual relationship with Ms Holder after they broke up in mid-2015. In early 2016, Mr Arvanitis also met three other women on hook-up app Tinder, who he now claims are out to destroy him.

Mr Arvanitis told the court that the explicit texts with Ms Holder in late 2016 were just “smut” that he never acted upon. The court heard that messages included invitations for Mr Arvanitis to stay the night while he was staying in Sydney, where Ms Holder was living.

Mr Arvanitis said he believed the introduction of the messages as evidence were a ploy by Ms Holder to break up his relationship with his new fiancee, Melanie Thornton.

To that response, Ms Holder stood up and walked out of the courtroom. “Sorry, I’m leaving,” she said.

“You’re a pathological liar,” she said while walking out the door, before returning about 10 minutes later.

Ms Holder was later asked by Judge Julie Clayton to be quiet when she reacted to another answer given by Mr Arvanitis about spiking her drink.

In her defence document, Ms Holder alleges that Mr Arvanitis drugged her with ice on Boxing Day in 2013 which caused her to become ill.

Mr Arvanitis has told the court that he left a rehabilitation clinic early in 2013 because of a serious drug addiction, which included the spending of more than $200,000 on cocaine.

Mr Arvanitis denied the allegation that he spiked Ms Holder’s drink. Ms Holder said from the front row of the court: “That’s a lie, you’re a liar.”

The outburst resulted in Judge Clayton shushing Ms Holder, who has mostly remained quiet during her former partner’s evidence about her allegedly abusive behaviour and sexual activities.

Mr Arvanitis is suing over a letter allegedly sent by Ms Holder and two other ex-girlfriends to Ms Thornton making claims he was a sex addict, violent and a cheat.

He has claimed that those women, who allegedly wrote “we are the sisterhood” in the defamatory letter, are out to destroy him.

On Wednesday, he was asked about messages he exchanged with yet another woman that he met on Tinder in 2016.

He told the court that the woman, who was from Adelaide, had become “unhinged” after he failed to reciprocate sending nude photos.

He said that he would sometimes have phone sex with the woman but nothing further as she was living in a different state.

Mr Arvanitis said the woman had later come into contact with Ms Holder.

“She’s absolutely lying and she’s trying to destroy me.”

Mr Arvanitis has defended his behaviour after meeting women on Tinder, saying he thought that the app was mostly used for sex and not serious relationships.

Those women are expected to be called to give evidence against him. 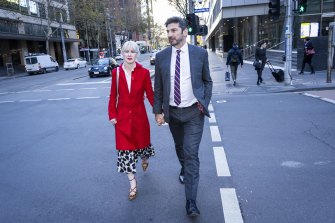 The court was also told about an unsigned death threat sent to Ms Thornton in 2019 that Mr Arvanitis believed had come from Ms Holder.

The letter included the words “hey plastic whore”, “die Barbie” and “we are going to get you”, however Mr Arvanitis could not say whether it was reported to police.

He denied sending the letter himself and said he believed it was written by Ms Holder.

Mr Arvanitis said that he had met Ms Thornton in January 2016, however he only considered it an exclusive relationship after they had a sexual encounter in December of the same year.