The Ukrainian leader visited the Kharkiv area as civilians revealed the torture they had suffered. Mr Zelensky emphasised his troops’ growing success, with Russia retreating in the north-east of his country. 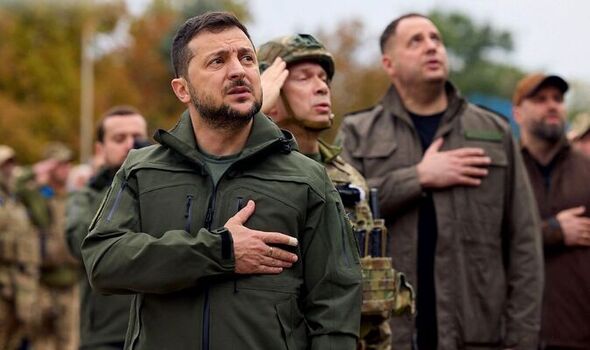 Even as the Ukraine flag was once again raised in front of the burned-out city hall in Izium, Mr Zelensky remained sombre amid the ruins.

He said: “The view is very shocking but it is not shocking for me. Because we began to see the same pictures from Bucha, from the first de-occupied territories…so the same destroyed buildings, killed people.”

Bucha is near the capital Kyiv where the bodies of civilians – many showing signs of torture – were dumped in streets, mass graves and in back yards as Russian forces fled in March. On Izium’s northern outskirts, long lines of destroyed Russian tanks lie along the roads.

Mr Zelensky added: “Our soldiers are here. That’s a very important thing. It supports people. I see how people meet them…a sensitive moment. It means that with our army, the life comes back.”

He said his “warriors” have taken back more than 2,300 sq miles from Kremlin control this month in the north-east and the south.

One mother separated from her son for six months shared a tearful embrace with him as their north-eastern village was liberated.

Kozacha Lopan, three miles from the border with Russia, was seized by Moscow early in the war. Vyacheslav Zadorenko, mayor of nearby Derhachi, entered his mother’s village with Ukrainian fighters, leaping from a car into her arms.

US President Joe Biden said Ukraine had made “significant” gains but warned of “a long haul”.

Ukraine is now targeting towns in the eastern Donbas.

More than 40 countries including the UK and US have agreed to investigate alleged war crimes in Ukraine.