Zelensky tells civilians in Donetsk still to evacuate amid fighting

‘The more people leave, the fewer people the Russian army will have time to kill’: President Zelensky tells civilians living in parts of eastern Donetsk still under Ukrainian control to evacuate amid intense fighting

President of Ukraine Volodymyr Zelensky has urged civilians to evacuate the frontline Donetsk region as clashes with the Russian military and devastating airstrikes become ever more frequent.

Zelensky warned in his daily address that thousands of people, including children, were still in the region’s battleground areas, with six civilians killed and 15 wounded on Friday, according to the Donetsk governor.

‘Leave, we will help,’ Zelensky said. ‘At this stage of the war, terror is the main weapon of Russia.

‘The more people leave the Donetsk region now, the fewer people the Russian army will have time to kill’.

Official Ukrainian estimates put the number of civilians still living in the unoccupied area of Donetsk at between 200,000 and 220,000.

Donetsk together with the neighbouring Luhansk region constitutes the Donbas – the area of eastern Ukraine Russian forces are hell bent on seizing.

Donetsk has faced the brunt of Russia’s offensive since its assault on Kyiv failed weeks into the invasion launched on February 24. 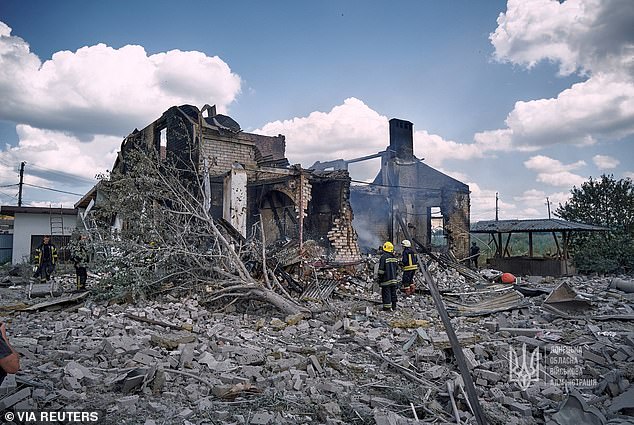 Firefighters work at a site of residential house destroyed by a Russian missile strike, as Russia’s attack on Ukraine continues, in Kramatorsk, Donetsk, Ukraine 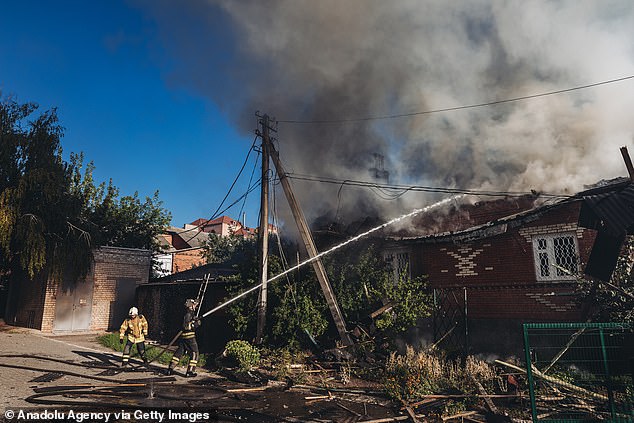 Firefighters try to extinguish a fire in a shelled house in Bakhmut, Ukraine, 30 July 2022 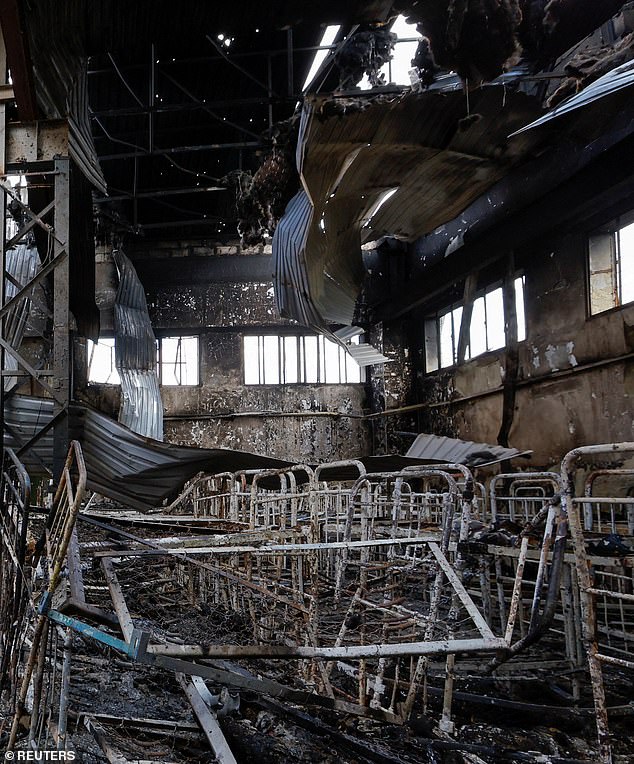 Debris is pictured following the shelling at a pre-trial detention centre in the course of Ukraine-Russia conflict, in the settlement of Olenivka in the Donetsk Region, Ukraine July 29, 2022 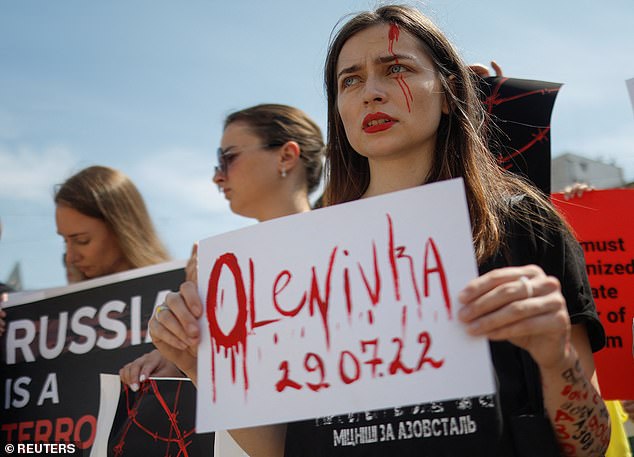 Olha, wife of a defender of the Azovstal Iron and Steel Works in Mariupol, attends a rally on Saturday July 30 demanding that world authorities recognise Russia as a state sponsor of terrorism after killing Ukrainian prisoners of war (POWs) in a prison in Olenivka, outside of Donetsk 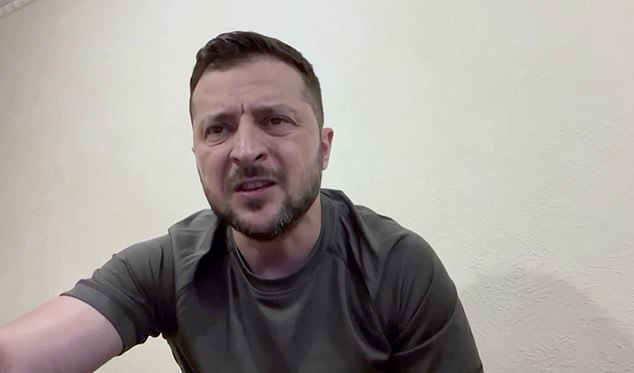 Zelensky: ‘The more people leave the Donetsk region now, the fewer people the Russian army will have time to kill’

A mandatory evacuation notice posted Saturday evening said the coming winter made it a matter of urgency, particularly for the more than 50,000 children still in the region.

‘They need to be evacuated, you cannot put them in mortal danger in the winter without heating, light, without the ability to keep them warm,’ Kyiv’s Ministry of Reintegration of Temporarily Occupied Territories said in a statement.

Zelensky, in his address, also once more pressed the international community, especially the United States, to have Russia officially declared a ‘state sponsor of terrorism’.

The call came a day after a jail holding Ukrainian prisoners of war in Kremlin-controlled Olenivka was bombed, leaving scores dead, with Kyiv and Moscow trading blame.

On Saturday, Ukrainian human rights official Dmytro Lubinets said on national television he had asked the International Committee of the Red Cross (ICRC) and the United Nations Human Rights Monitoring Mission to go to Olenivka.

The ICRC has made a request but not yet obtained authorisation from the Russians, he said.

It said Saturday that the dead included Ukrainian forces who had surrendered after weeks of fighting off Russia’s brutal bombardment of the sprawling Azovstal steelworks in the port city of Mariupol.

The defence ministry said 50 Ukrainian prisoners were killed and 73 were taken to hospital with serious injuries. 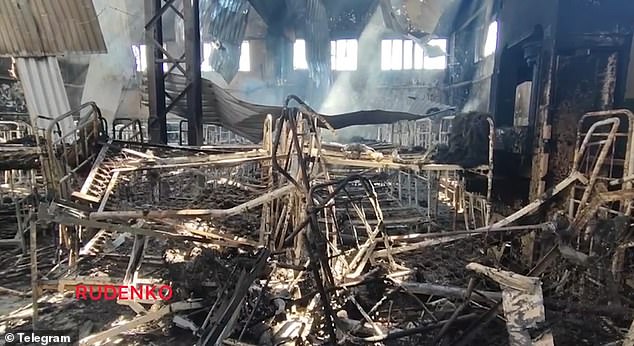 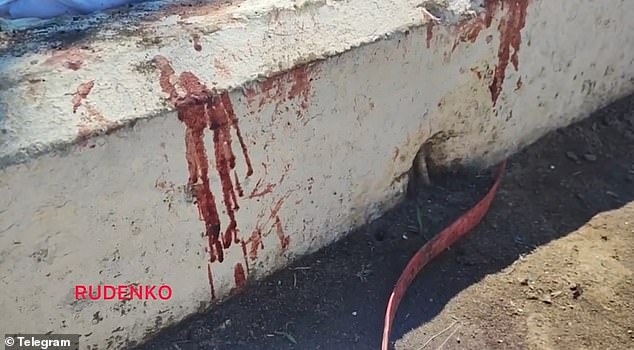 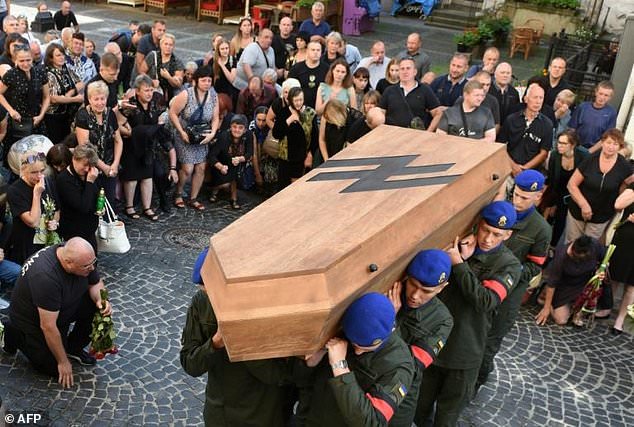 Also on Saturday, Russian energy giant Gazprom suspended gas supplies to Latvia in the latest tightening of gas provision to European Union states, which have accused Russia of squeezing supplies in retaliation for Western sanctions imposed over Moscow’s invasion of Ukraine.

Latvia’s Economy Minister Ilze Indriksone told the LETA news agency that his country ‘was not counting on natural gas flows from Russia.’

Gazprom drastically cut gas deliveries to Europe via the Nord Stream pipeline on Wednesday to about 20 percent of its capacity. It had reduced gas flows to Europe twice in June.

The Russian state-run company had earlier announced it would choke supply to 33 million cubic metres a day – half the amount it has been delivering since service resumed last week after 10 days of maintenance work. 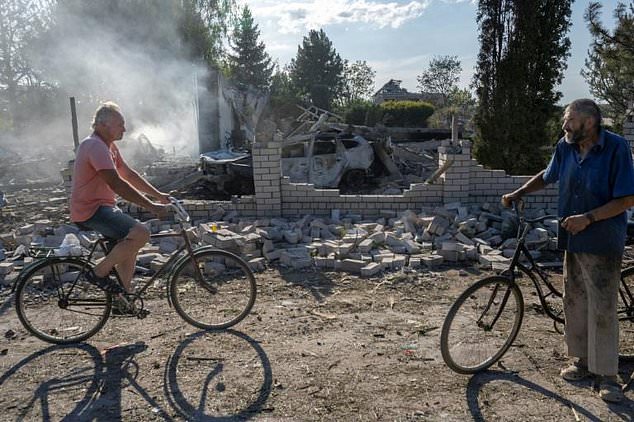 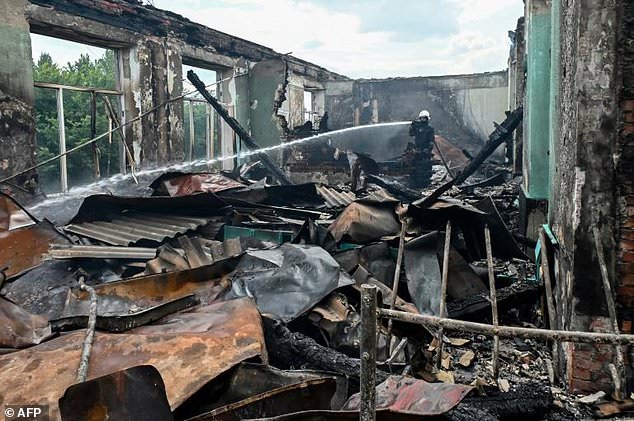 Russian missiles hit a school in the eastern city of Kharkiv

Russian strikes continue to rain down across southeastern Ukraine.

Ukrainian authorities said early this morning that Russian bombardments had left one dead in southern Mykolaiv and one dead in eastern Bakhmut.

The death toll from a strike on a Mykolaiv bus stop on Friday climbed to seven after two men died in hospital.

By early Sunday morning, Mykolaiv was again hit with ‘massive shelling, probably the strongest of all time,’ according to mayor Oleksandr Sienkevych.

‘Powerful explosions were heard after 1 at night and around 5 in the morning. A number of objects were destroyed, residential buildings were damaged. A number of fires broke out at the struck sites.’

Shortly afterwards Russia said a Ukrainian drone attack on its fleet in the Crimean port of Sebastopol wounded five people.

‘This morning, Ukrainian nationalists decided to spoil the Day of the Russian Fleet’ being celebrated on Sunday, the Russian-annexed city’s mayor Mikhail Razvozhayev said on Telegram.

A Ukrainian spokesman said his country’s forces had set fire to grain fields around Mariupol so they could not be used by the Russians.